One on One: Apsara DiQuinzio on Bruce Conner’s LOOKING GLASS

Alongside our weekly in-gallery curator “One on One” talks, we post regular ‘one on one’ bits here on the blog. Follow the series here. Today’s post is from assistant curator of painting and sculpture, Apsara DiQuinzio. I’m tipping you off now to the ‘big reveal’ in this piece: never-before-seen pictures of the back of Bruce Conner’s LOOKING GLASS, below. Apsara’s talk is tomorrow night. 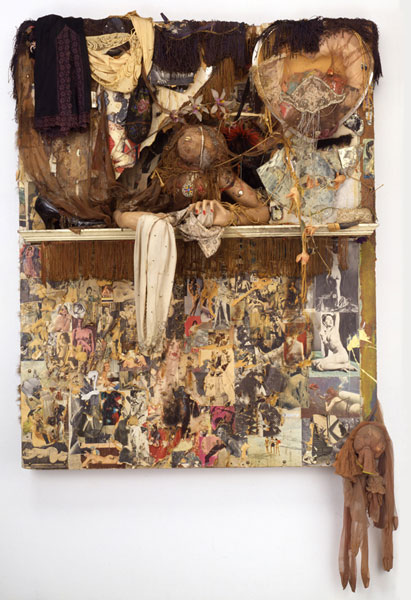 As a curator, I’m frequently asked the question “who’s your favorite artist?”, usually when meeting someone for the first time, and as every curator knows this is an impossible question to answer. I typically respond by asking “from what period?” or “I don’t have one favorite, I have many” (which is, of course, true). Sometimes I pick an artist I have worked with, would like to work with, or about whose work I have recently become impassioned. On many occasions, however, I have simply responded: “Bruce Conner.” He is my consistent fallback. I also know many other curators, art historians, and artists who I could imagine might answer the same, and I am not the first person to make such a confession here. The preponderance of art professionals I know who deeply admire Conner’s work is interesting, ironic even, given Conner notoriously cared little for curators, or the art world in general. In fact, he spent much of his artistic life eschewing museums, galleries, and collectors because he found them impossible to work with. Indeed, as is oft-noted, in 1967 he exiled himself from the “art business” for several years, supporting himself by working variously as a ticket clerk at a movie theater, a salesman at a “knickknack” shop, and as a janitor.(1) And it is no secret that Conner had an, at times, contentious relationship with this institution, most notably in the early 1970s, when he refused a retrospective at the museum (then the San Francisco Museum of Art), because he and then-director Henry Hopkins could not come to an agreement on how the exhibition should be organized. Fortunately, however, SFMOMA has steadfastly collected his work, and we now possess a significant concentration (just over thirty works) of his uniquely diverse output: assemblages, collages, drawings, films, photographs, and prints (four of which are currently on view).

Protean and hybrid, Conner’s artistic practice embraced flux and disintegration. His predilection for entropy, violence, and disrepair can be witnessed throughout his entire body of work, but particularly in the assemblages made from a conglomeration of dirty and eroded found objects that he intentionally left in “their rotten, lost state.”(2) This aesthetic counterposes the slick, fetishistic style of mainstream advertising, especially the glossy magazines from which he excised pictures to use in his collages. He insisted, for instance, that his sculptures not be dusted, “Any dust that is there is important to the work,” Conner stated.(3) Moreover, he often revisited objects that remained within his reach over extended periods of time: “I never considered any of these collages and assemblages to be finished, they were dated at the time I hung them on the wall.”(4) This organic, open-ended approach also applied to many of his films, which he re-edited on multiple occasions, reconstituting footage from old films into new ones. THREE SCREEN RAY (2006), currently on view in SFMOMA’s media arts gallery, is an exceptional example. It takes Conner’s COSMIC RAY (1961), set to Ray Charles’s hit song “What’d I Say,” as its point of departure, and in it one can also identify familiar elements from MEA CULPA (1981). 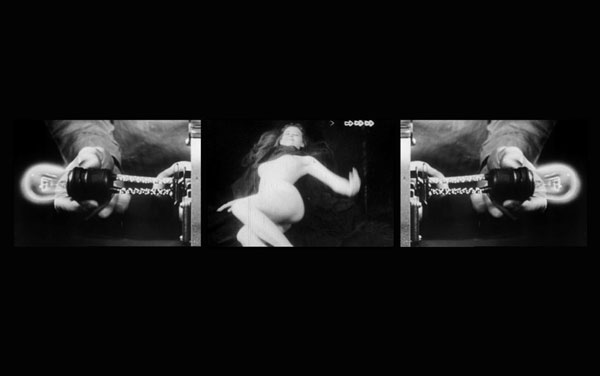 Conner insisted on opening-up the object to the vagaries of time, even if that meant leaving it “vulnerable” to an errant visitor’s touch. He meticulously built up the tactile surfaces of his assemblages, producing a strong haptic tension that often elicited a desire to touch. Referring to the 1960s, Conner reflects, “At that time my relationship to my work was that people who would become involved enough in the work to actually touch these collages and assemblages, had to be emotionally or conceptually involved to a point where they were like participants.”(5) This is not to say that Conner wanted people to touch his work; he did not encourage this, but that physical tension was an essential aspect. In fact, after seeing a “Do Not Touch” sign placed next to his painting DARK BROWN (1959) in SFMOMA’s galleries in 1964, and the curator’s subsequent refusal to take it down, Conner made a conceptual work about the dispute, aptly titled TOUCH/DO NOT TOUCH (1964).(6) The piece consists of twelve prestretched canvases that Conner himself never handled, instead enlisting his friend the artist John Pearson to apply the black transfer letters “DO NOT TOUCH” to the center of twelve preprimed canvases. For the thirteenth canvas, Conner himself set the letters to read “TOUCH.” He then paradoxically placed a Plexiglas vitrine over it, so that his directive was impeded by its own presentation.

That same year, while still in Brookline (before moving back to San Francisco), Conner also made LOOKING GLASS, widely believed to be his last assemblage. Like the artist’s first film A MOVIE (1958), also entirely made from found material, in this work one encounters a visual stream of pictures—“an optical overload.”(7) Composed of erotic images cut from girlie magazines, which he “glued-down” and stapled onto board, the work inundates the viewer with an idealized, feminine stereotype, making it difficult to retain any one in particular. Conner has cited that part of his inspiration behind making A MOVIE was to work the “forbidden image” of “a nude woman in profile taking off the last of her clothes” into a larger film.(8) That image came in the form of a piece of filmstrip given to him in 1950 by his friend Lee Streiff.

Conner would return to this staged, “prurient” image of femininity—one fashioned for male desire—repeatedly throughout his career through use of stock film footage and other found material. The manufactured image of femininity widely circulated in American popular culture contrasts with the more personal, subjective depictions he proffers of his friends Jay DeFeo and Toni Basil in his films, THE WHITE ROSE (1967) and BREAKAWAY (1966), respectively—unique in that they were both shot by the artist himself. Conner’s use of the “forbidden image” perhaps assumes its most consummate form in LOOKING GLASS (its celluloid counterpart is MARILYN TIMES FIVE, 1968-73). In LOOKING GLASS, one encounters the same critical overture Conner employs in his films as he thrusts the mass-produced, American representation of “woman” back onto its own collective gaze. In effect, the work magnifies our own obsessive, visual consumption of the subject. (He is renowned for doing the same with war and violence in other films and sculptures.) The pieces of a magnifying shaving mirror Conner sets at eye level suggests the viewer’s role as a complicit observer—a participant in the theatrical field of the object. Conner adds dozens of feminine signifiers: a gnarl of panty hose (his signature material) in the lower right corner, jewelry, fake fur, a black patent-leather high heel, a beaded purse, a silk slip, an empty heart-shaped box of chocolates, underwear, and a hidden piece of a doll that recites the phrases “Let’s have a party” “I like you”; and Let’s be friends” when its ring is pulled.(9) Presiding over the work in the middle is a sculptural exquisite corpse, rendered with the hands of a mannequin and a blowfish for a head—the inevitable monstrous result of such excessive cultural objectification.

Until recently LOOKING GLASS has been set under a vitrine. While installing The Anniversary Show the curators, acting in cooperation with our conservators, removed the Plexi cover, restoring the work to its more intended “vulnerable” state—a state the artist would have undoubtedly preferred. Upon removing the vitrine, our conservator of objects, Michelle Barger also took pictures of the back of the work, which like many of Conner’s assemblages, is also covered in images. In the spirit of Conner’s desire for the viewer to be able to see all sides of the work, we make them available for you to see here, for what we believe is the first time: 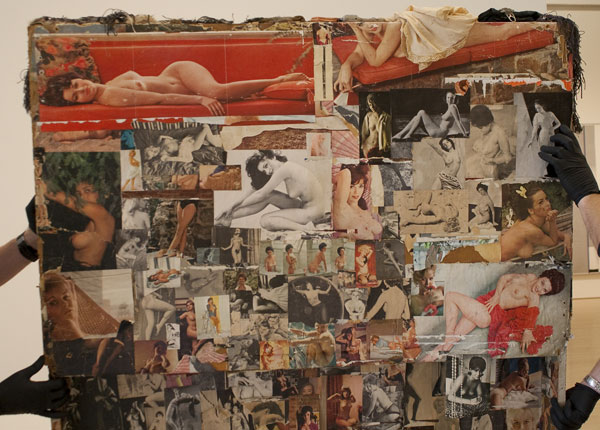 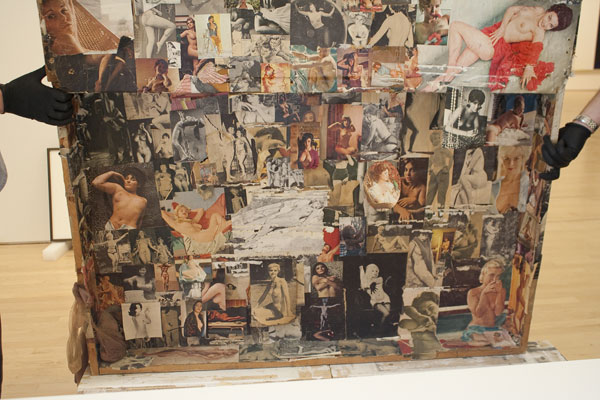 I hope you can join me this Thursday night at 6:30, when I speak about this work and one of my “favorite” artists for our One-on-One program series in SFMOMA’s second floor galleries.