There’s that one triangle in the Mission I always think is going to be so easy to navigate and I always wind up overshooting my mark by a mile. 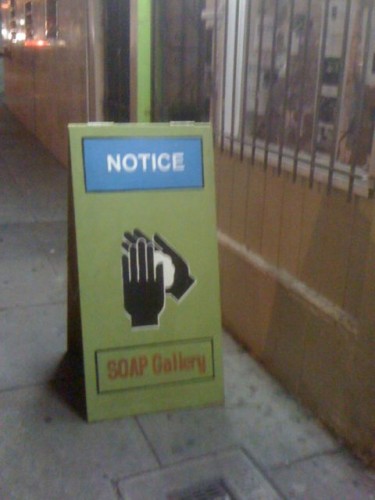 You know where it is, in that mystic region where parallel lines meet and Valencia bumps into Mission with a startled glare like a Peter Arno cartoon. 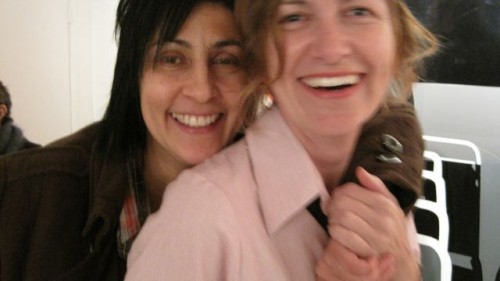 Paula Pereira and Pernilla Andersson at the opening of their show, “On Time,” at San Francisco’s Soap Gallery, March 2010

That’s where the Soap Gallery is and that’s where I went on Saturday evening to see the opening of “On Time,” a new installation of large-scale paintings by the Northern California-based team T.W. Five. Studio space in San Francisco is expensive, so T.W. Five rents a big studio in San Jose for something like $400 a month, and they need a big space if this work is any criterion. (And they’ve been going to school at San Jose State.)

I walked in off the street at twilight time and rubbed my eyes, like a beggar in old Baghdad, in sheer astonishment, or a frisson closer to terror. For at the far end of the gallery loomed what looked to me like a full-fledged baggage carousel, moving counterclockwise, an array of brightly colored bags passing before my gaze. The gallery, inauspicious from the street, opens up once you’re through the narrow doorway, and the back wall is splendidly lit, transformative. Whatever Paula Pereira and Pernilla Andersson are doing, it combines elements of Pop Art predecessors from Lichtenstein and Rosenquist to Peter Saul and Victor Vasarely, and emerges out the other end with the sinuous beauty of Jean-Léon Gérôme. 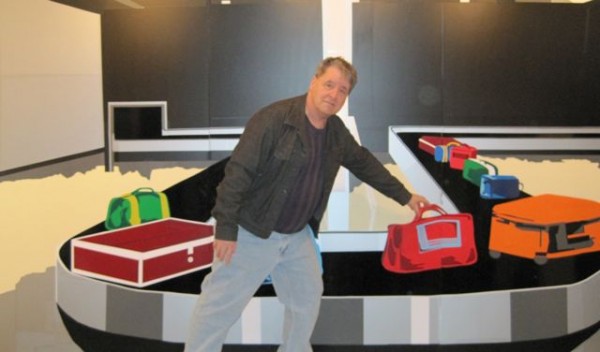 Fooled into grabbing a bag!

If those crazy birds from classical legend, who picked at Zeuxis’ grapes in classical Greek legend, had been around, they would have barreled through the gallery to grab a perch on those suitcases.

“Tricked again,” I exclaimed to the gallerist, who directed me to the two artists, Zeuxis and Parrhasius, that is, Pereira and Andersson, who could explain better what they were doing. I think, however, that a large part of me wants to be tricked. What else am I doing in the art world? When I was a teen on acid, I used to stare at the plates in the old Abrams World of M.C. Escher, pondering, how did that staircase go up and down from either side? Which wrist, with its delicately rendered cuff, is propelling which fine pen to draw the other wrist doing the exact same thing? In trompe-l’oeil lie some of the secrets of the universe—at least, some of its very best jokes. 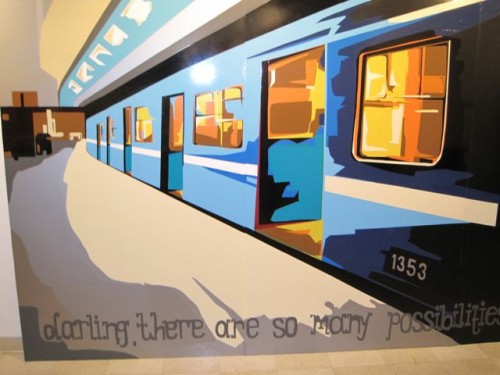 This big painting leans against the right-hand wall of the gallery space.

I can see that T.W. Five are doing more than tricking the eye. They are negotiating social space on quite a breathtaking level. Andersson is from Sweden, and a Swedish bus or tram takes up the left wall of the gallery; on the right there’s a Brazilian subway car from Paula Pereira’s homeland. Does the baggage carousel represent a temporary autonomous zone for today’s nomads? Is it here in the USA? Does San Jose have an airport? Is it all in the imaginarium? 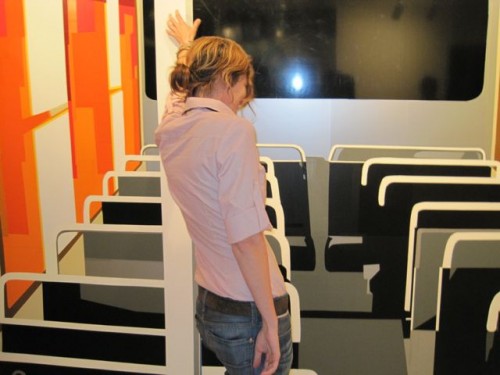 Artist Pernilla Andersson on a bus from her days in Sweden. Hint: it’s a really a painting, a flat surface, that she’s leaning against, so weary, like she’s done this a thousand times.