In January, at the opening of the Anniversary Show at SFMOMA, artist Colter Jacobsen and I found ourselves standing in the doorway of the SECA/Mission School room, which was kind of comical since Colter himself is frequently associated with the Mission School. Well, maybe not “comical.” Maybe “awkward” or “ironic” would be better. I pointed to the signage and said, “I guess the Mission School is official.” Colter nodded toward the Barry McGee assemblage bulging from the wall and said, “Yes, it’s pregnant and giving birth to itself.” 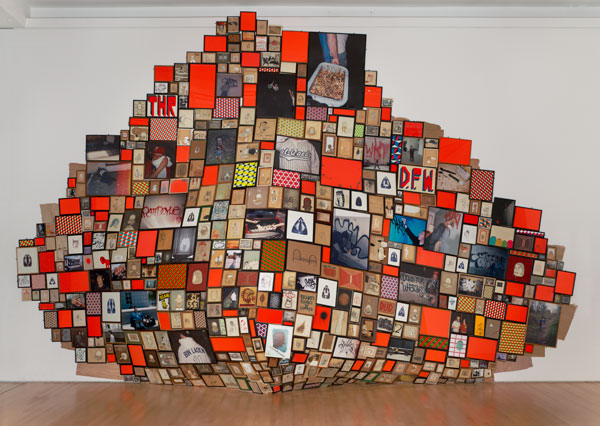 A few weeks later, when I return to take a better look at the works of Leslie Shows, Simon Evans, Barry McGee, etc., my feelings are mixed. It’s great that the museum is supporting younger local artists, but does this art with its found materials (a.k.a. garbage), skateboard images and graffiti, want to be there, all gussied up and crowning the walls of gallery 204B? I remember openings for these artists at Jack Hanley’s gallery on Valencia, Adobe Books on 16th Street, and Rick Jacobsen’s short-lived Kiki Gallery (1993-95) on 14th Street—musician friends or the artists themselves tormenting electric guitars, art lovers spilling out onto the sidewalk, swilling canned beer, smoking and talking a mile a minute, the crowd so dense that passersby had to walk in the street to get around them, neighbors calling the police. I remember the wooden fort-type structure Chris Johanson filled Jack Hanley’s with, how we had to climb on it and bend our bodies and peek through crevices to view the pictures he’d affixed to it. I remember the stench of cat urine at Adobe, the dust, the labyrinth of scenesters sipping red wine from plastic glasses amidst book-laden tables that prevented anyone but the most devoted from making it to the tiny back room to view the art. I remember the art serving as a backdrop to plays, poetry readings, and acoustical music sets—and Jerome Caja taking a bubble bath in a claw-footed tub during his opening at Kiki. I turn around and around in gallery 204B and no matter how hard I try, I can’t feel the aura of those raucous nights clinging to this work. This art, I think, has lost the battle. It is now one with the impenetrable cleanliness of the institution. 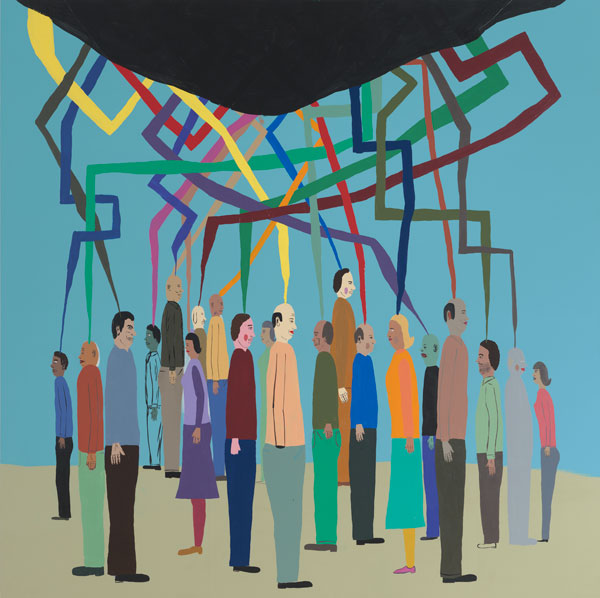 When I walk through an art museum, I sometimes experience a rush of the living community that created the objects—this other place and era that was invariably filled with light, because aren’t all artists supposed to be obsessed with light, like they feed off vast amounts of brightness and they work in studios with huge plate glass windows and skylights. When I stand in front of an Impressionist painting, it’s not just any old light bouncing off the canvas, it’s the blinding sunlight of 19th century absinthe-fumed Paris reaching through time and shining on me. That’s a great museum day. On a bad museum day, all I see are objects ripped from context, denatured. The moisture-controlled air grows colder, more tomblike, and the art seems to be waiting, like crypted vampires in a Hammer horror film, waiting for a few drops of blood, a clueless archeologist’s bloody nose or a devotee’s dramatically cut finger, waiting so that they can reanimate and wreak bohemian madness. 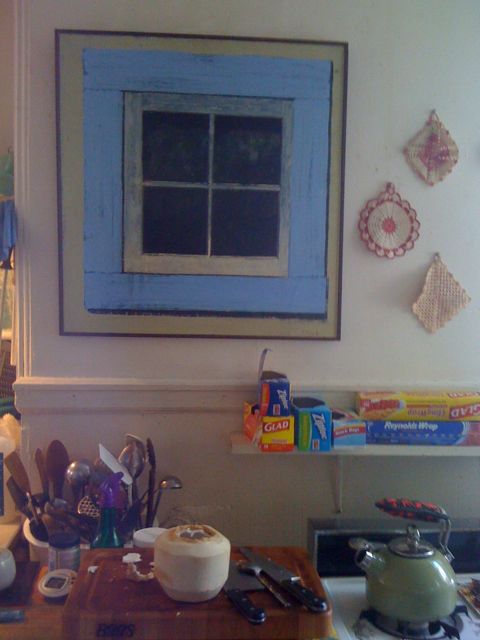 In my kitchen above a prep counter hangs a square canvas from the early 50s, by the Detroit-born painter Jorge Fick (1936-2004), who worked at Black Mountain College with John Chamberlain and Franz Kline. The oil painting originally belonged to the late Donald Allen, who published many of Fick’s contemporaries in the Evergreen Review and the seminal anthology The New American Poetry 1945-1960. I don’t know the name of the painting nor its exact year. Don Allen told Kevin that Fick’s painting, comprised of gray, pale blue, and black rectangles, is of a window at Black Mountain. It’s soothing to stand at my cutting board and stare at this window with its opaque black panes. The painting is spattered with grease and tomato bits, it feels the changing atmosphere of my kitchen, the chill of winter, the flames under my tea kettle, the dampness of yesterday’s hail storm. Allen took better care of it, but I like to think the Fick is happy living with us. Like my mother’s cat, it’s been moved from a much cushier environment to my disgraceful funkiness, but it continues to thrive, to intersect with a living, breathing world. 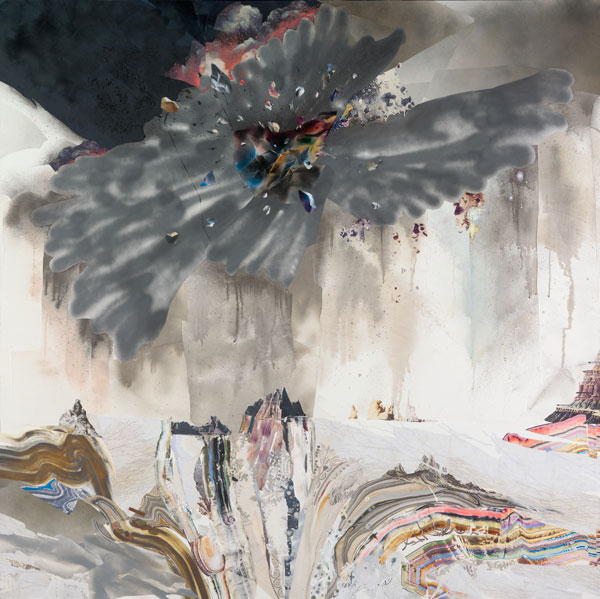 You want to hold on to a scene, to make it last forever, but art communities are transitory, neighborhoods are transitory The Mission scene is over. No longer is it a cheap place to hang out and make art. Condos have replaced garrets, and outsiders take cabs to $$$ restaurants. When I lived there in the mid-80s it was nearly impossible to get a cab there because cabs didn’t bother going to such a shit hole. Some artists have moved to downtown galleries, others have left town. I hear Jack Hanley is closing his San Francisco gallery. The urinating cat at Adobe passed away. When I see artists I know displayed in a museum it’s a bit tragic, for that entry into the museum comes with whiffs of loss, of vibrant worlds that are no longer. Maybe it is my Mission scene, the one I remember, that is over; Kevin reminds me that, somehow, even in these inflationary times, a whole new crowd of young artists is working hard and doing beautiful things in the Mission; and that in fact many of the Mission School artists are still with us, Colter included. During the anniversary weekend “75 Reasons” show, we heard designer Jennifer Sonderby explain that she chose Leslie Shows’ Two Ways to Organize for the cover of SFMOMA’s 75 Years of Looking Forward catalogue because of the painting’s layering. Sonderby likened the history of art to geological strata, with each artist adding to the strata. What I see as the “real” San Francisco may be disappearing, but I realize that when I moved here in 1979, one month before Harvey Milk was assassinated, I was already stepping into an onrushing stream of hope and regret. Art museums. We love them, we hate them, with their canonized objects so far removed from their roots. The art museum taps into our fear of death, imbuing these fragile materials with immortality. When I reconsider Barry McGee’s bulging assemblage I realize, it’s not pregnant, it’s bulging with something from another dimension, trying to break through.