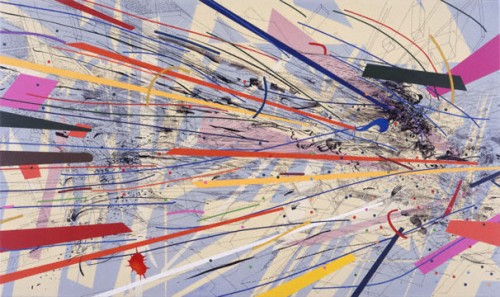 I’m struck this week by Calvin Tompkins’s piece in the March 29 New Yorker on Julie Mehretu‘s recent commission for Goldman Sachs in NYC.

“It took me a long time—six months or so—to decide I wanted to do this,” Mehretu told the writer. Mehretu is thirty-nine, friendly, and open. “One reason was this wall, which is so clearly visible from outside the building…I could never make a painting this scale anywhere else.”

I’m intruiged by the relationship between Mehretu’s work, the creative process used by the architects of the building in which “Mural” is housed, and the story of Goldman Sachs history as a financial institution and patron of this creative work.

As described in Tompkin’s piece Mehretu’s work the result of the rigorous application and accumulation of layers of markings covered with silica, sanded smooth and then repeated. In this case the layers implicity refer to the history of finance capitalism – maps, trade routes, population shifts; then sets of architectural drawings projected and traced onto the canvas; followed by several other sets of markings and graphics. Because the upper layers are created with transparent colors, elements of the previous layers are visible enabling the viewer to look deep into the painting conveying ” a sense of embedded time”.

In landscape architecture pedeagogy,  this type of layering in referred to as palimpsest. 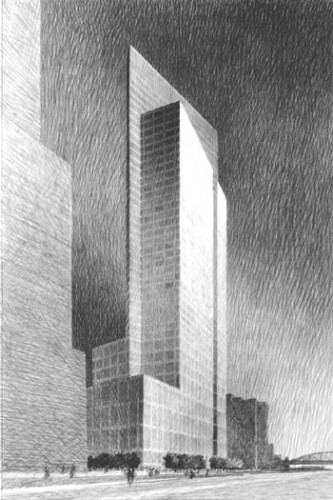 Mehretu’s process of layering and tracing was undoubtedly used by the architects during the process of designing the building. The glass- and stainless-steel tower, designed by architect Henry Cobb of Pei Cobb Freed & Partners, will house six high-tech trading floors, three floors of meeting and amenity spaces, and 30 floors of office space. 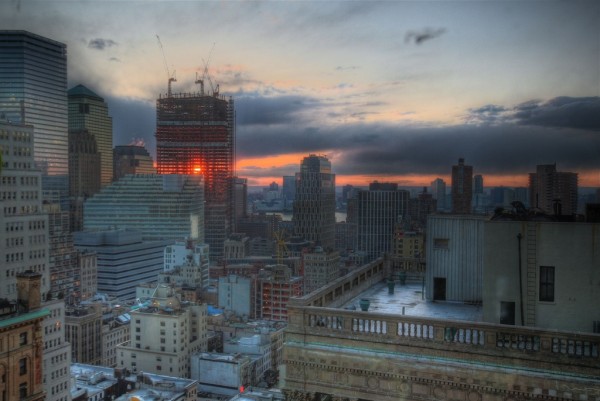 Architectural works of this scale are only possible via the patronage of global corporate capital and are potent symbols in every city of current global power relationships. In other words these buildings would not exist without billionaire patrons to cultivate architectural talent and astounding feats of engineering.  Interestingly, great effort and expense has gone into crafting corporate identity through the building’s design: it incorporates environmentally sustainable features and the latest green-building technologies — including use of ultra low-sulfur diesel fuel — with the anticipation of earning a Leadership in Energy and Environmental Design (LEED) Gold certification. Its big bad global corporate capital cloaking itself in an environmentally and socially responsible skin.

Eighty feet long by twenty-three feet high, “Mural” dominates the entrance lobby of the new building.  Its the largest piece undertaken my Mehretu  to date.   The billionaire patronage of Goldman Sachs has enabled this artist to realize a creative feat otherwise impossible to achieve.

To what degree has the desire to shape corporate identity guided the creation of Mehretu’s enormous new piece?  How much has the capital intensive global art market driven or suppressed artistic innovation.  What  and whose narrative will be legible through the palimpsest of history?