On the Reinvented Oakland Museum

Following up on last week’s theme of lesser-known regional treasures, I got in touch recently with Phil Linhares, senior curator of the Oakland Museum, who graciously agreed to give me a preview tour of the remodelled galleries on Wednesday, February 17th, in advance of their reopening on May 1st. First a word about Phil: he has been a pillar of the art scene in the Bay Area for forty years, and is vastly less recognized for his contributions than he ought to be. He has been the director of the SF Art Institute Gallery, and the Mills College Art Gallery, and been the senior curator at the Oakland Museum, and his years at the first two institutions are looked upon by many as the golden years of those places. Capping off his career will be the reinvention of the Oakland Museum, working, of course with many others.

Recently having read Mani by Patrick Fermor, the genius British travel writer, I was impressed by his descriptions of clan warfare in the wild and isolated parts of Greece in the past. Families would build outrageously high towers, and in times of warfare, would rain down ruin on competing clans from their heights. Kind of a village version of the old (and less violent) competitions among Italian towns to have the most and biggest towers. Most notably surviving is San Gimignano, which once had 58 towers: 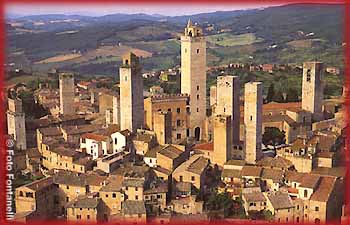 With Yerba Buena and SFMOMA opening in the early 90s, and the remodelled Palace of the Legion of Honor opening shortly after that, San Francisco dominated the local museum edifice boom of almost 20 years ago. Then the opening of the new De Young a couple of years ago, and the Contemporary Jewish Museum, not to mention the new Academy of Science, really brought a great sense of Gimignanismo to the City’s major museum world. The East Bay is now bracing for its own star turn, with the Oakland Museum’s new configuration this year, and the Berkeley Art Museum’s decision to remodel an existing building just off campus in the years to come.

Using a budget of some 58 million dollars, raised from bonds as well as private philanthropy, the museum has been closed since last year to remodel and rethink the way it fulfills its mission: documenting the art of California. The intention was in large part to update the tripartite art, nature, history structure of the museum to get more integration. With consultation by longtime designer Ted Cohen, who was the first exhibition designer at the museum, circa 1960-75,  who is working on color, design and placement of the works, the galleries have been expanded, including incorporating formerly outdoor spaces into the museum as new galleries, to great advantage.  The collection has been rehung, bringing much work never seen before by the public, as well as many new acquisitions. The crypt-like concrete walls of the art brut period have largely been replaced with brightly colored sheetrock walls. Vistas of the History galleries downstairs, that had been blocked for decades, are reopened. The strictly chronological displays have been replaced with the kind of thematic groupings that the Tate Modern in London initiated a decade ago. There are rooms for craft, for outsider art, Bay Area figurative abstraction, contemporary work, and much more. There are reading and media rooms. The stairway from the entrance to the galleries is now covered. Most striking of all are two new galleries that total 4500 square feet, especially the new gallery in the rear right that is a light-filled, terrazzo-floored gem for changing exhibitions. Pictured below is how (about half of the space) looked during initial install last month. 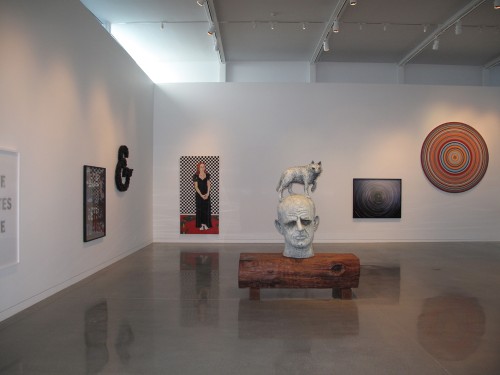 A highlight of the upcoming opening celebration will be a 31-hour series of non-stop conversations between noted figures in the community (May 1 and 2). Upcoming in the first year after opening will be such exhibitions as a retrospective of the East Bay’s PIXAR studio, and major new work by noted artist and naturalist Mark Dion. I came away from my tour feeling that my neighborhood museum (I live in Jack London Square) had awoken from a long slumber and I very much looked forward to getting reacquainted.