Five questions to SFMOMA artists, staff, or guests. Steve Anker is the Dean of the School of Film/Video at CAL ARTS and the curator of three programs in the 75 Years in the Dark film series: Material and Illusion, Bush Mama and tomorrow’s screening of Chris Marker’s Le joli mai.  He lives between San Francisco and Northern Los Angeles. 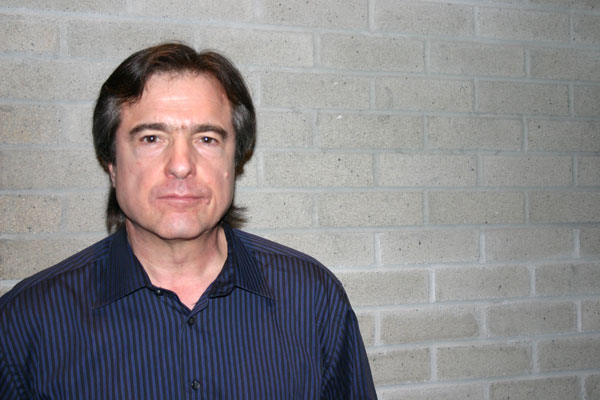 Steve Anker in the Wattis Theater.

I collect films, a small amount. I collect comic and graphic novels. All of them, all over the map, ranging from early even pre-20th century newspaper comics to underground comics to comic books of all kinds to contemporary graphic novels of all genres. And I collect various kinds of music, CDs and vinyl.

There’s the generic interview question that goes, “If you could invite anyone to dinner who would it be.” What I want to know is, what would you eat?

I would eat Cornish game hen. I don’t know why that sprang to mind.

A painting by Vermeer. I love looking at the magical quality of light in his paining. The other one would be a late Mark Rothko.

I carry a tin of Altoid chewing gum. I do a lot of speaking and meetings.

How I think about my roles in the world. I see myself at this point as a curator, a writer, a program creator both for schools and for exhibition, and I think of myself as an educator and finally as an administrator. I have a long term relationship that I hold in the highest regard and I have family relationships—brothers, mother, cousins—that I take very seriously. So, those are my personal roles. I also play classical piano. And working out at a gym; I’ve been doing that on a regular basis for a couple of months.

The film series 75 Years in the Dark continues through May with screenings from SFMOMA’s film history.