Five questions to SFMOMA artists, staff, or guests. Alexandro Segade lives in Los Angeles and is an artist working collaboratively with the band/performance/theater group My Barbarian.  He and his bandmates Malik Gaines and Jade Gordon will be performing at SFMOMA this Thursday as part of the Now Playing event. 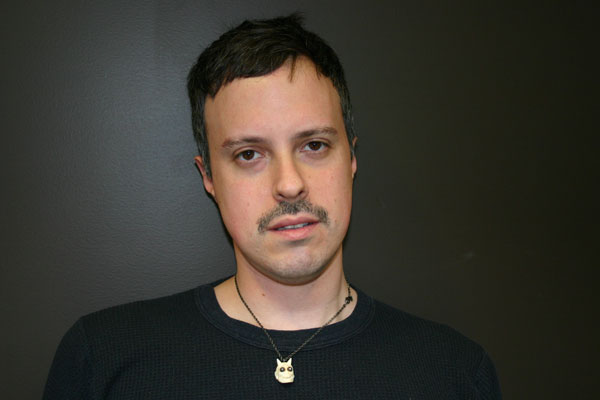 Alexandro Segade in the SFMOMA offices.

Not really. I guess a collection is three or more of the same kind of thing. I suppose at one time I could have said yes, but now I’m trying to get rid of most of the things I have. I definitely have some kind of a collection of records, mostly soundtracks and original cast recordings of shows. Once I started working constantly as an artist I started producing more and more things and so collections became less important because I was generating my own stuff. Most of the work we do is almost like a theater company: we have costumes, props, and lots of archival documents. We amass so much stuff that never leaves that collecting became less important to me.

There’s the generic interview question that goes “If you could invite anyone to dinner who would it be?”  I want to know what you would eat.

Lately, I have been reading a lot of stuff about Rainer Werner Fassbinder. Fassbinder has been one of my favorite filmmakers for a long time. He’s a lot of people’s favorite filmmaker. The other one would be Pasolini. I’d like to have dinner with either of them. With Fassbinder I would assume we should have some traditional Bavarian beer garden meal—so some kind of long sausage and beer. You would hope that he would follow it up with some drugs, because he’s Fassbinder. With Pasolini, hopefully we would be having Italian food in Rome. If it was Pasolini and it was in Rome, we would have Carbonara—pasta with egg and pepper and bacon. It’s really good. It’s insane. It’s a Roman specialty. But there are others. I would like to have dinner with Mary Kelly again. She was my mentor in graduate school. She’s an amazing cook. She made duck for dinner for me once, I would be very happy to have that again.

I usually listen to someone else talking to me. Because I work in a collaboration and we make our own music, often our own music is what we hear when we’re working. If that has to be tuned out, sometimes we listen to just something that makes sounds. Lately, what we have in the studio is a pile of scratched and messed up CDs that are, for the most part, German progressive rock from the 70s, so Amon Duul, Magma, Can—but then also for some reason there’s a CD of Cheetah Rivera and Liza Minnelli singing The Rink that comes on sometimes. Whatever happens to be in that pile. I think there’s an Alicia Keys CD. There’s a Steely Dan CD in that pile too. Honestly I have no specific taste.

I would say my laptop. It really is quite wonderful. My video cameras. There are certain materials I like to use when we are making props. I do like to make masks out of whatever we can find. Jade has very specific needs in terms of what she needs to sew. She just got a new foot for her sewing machine that makes ruffles really well. Malik is a musician so he has all of these different instruments. I don’t have the same type of intimate relationship with those tools as I do with the computer because you can make videos, you can edit sound, you can put stuff online, and you can communicate with other people. It’s a Mac.

My sign. I’m a double Aries with my moon in Pisces. Aries is burden as much as it is an inspiration to others. It’s the first sign of the zodiac so there is a drive toward leadership, I don’t know that it’s always successful. There’s always an interest in groups, in group activity. And goal oriented, very ambitious – not particularly good at finishing things, but very good at starting. I just got my chart done recently. I’m hoping that because my moon sign is Pisces that it could balance out my two Aries. Pisces is symbolized by two fish and it’s the end of the zodiac. Since Aries is the first sign and has two rams, then maybe they can be balanced out by the Pisces which means maybe I can learn how to be good at finishing things. There’s an insensitivity thing that is intrinsic in the Aries that maybe the Pisces makes up for. But also, I don’t believe in astrology.