LOBBIES, and their varieties

Is it too much to hope that when Mehretu’s work is taught in the future, that the fortunes of Goldman Sachs will be discussed too?

Searching for an in situ image of “Mural,” Julie Mehretu’s Goldman Sachs mural, I found this. A complete newcomer to business blogs, I was impressed that the writer, Courtney Comstock, has taken on the topic of financier’s art, and amused by the fierceness of her language. 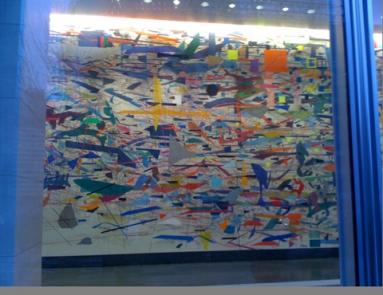 (Apologies that it’s not a bigger image. Rebar has a nice one on their post.)

I’m skeptical of the thoroughness of Clusterstock writer’s Courtney Comstock’s research – she seems at least as crude in her discussion of an art work’s possible meanings and value as the G Sachs sources she draws on.  Comparing Mehretu’s piece to Franz Akerman’s on the other side of the building, Comstock writes:

Nobody thinks this one is any good either.

At least the big bright mural has two names, both “Sunrise, Sunset,” and “The Windmill, The Water, and The Grain.” This one doesn’t even have one name.

BUT, I’m falling down the rabbit hole of the the internet in leading with these details. Here I simply want to make a few comments about patronage and “public” art, and art history and memory – prompted by Rebar’s post, and by having read the New Yorker piece by Calvin Tomkins about Julie Mehretu with many mixed feelings. This began as a response to Rebar, but I’ve decided to up its status from carry-on to checked.

Medici is not a name that will ever disappear. But the artworks that survive from the House of Medici are certainly what I know better than the specific history of Medici rule. What that means, of course, is that Medici excesses, sleaziness, and brutality are vagaries in my mind compared to the deeply affecting works by Masaccio, Donatello, Fra Angelico, Brunelleschi, Rubens, et. al, that I’ve come to know in my life. I’m grateful that culture was grown and nurtured by centuries of Medici patronage. I’m also aware that the history of art I learned never EVER taught me what the politics of these patrons were, never discussed where the money came from, never pointed out that one could be a Medici AND a pope simultaneously.

A piece in the New Yorker written by Calvin Tomkins can’t be expected to challenge Mehretu on her work or her choice to take the $5 million from GS. Ethics is not one of Tomkins’s interests or concerns. I think, to Mehretu’s credit, she makes the legitimate point that given the location of the mural, GS offered her the opportunity to produce a PAINTING that was going to be visible to the public. A work of public art, so to speak. It might be nice to calculate what portion of this painting we, the “public” that is paying in vital fluids for some of GS’s venal and rapacious practices, actually OWN. I’d like to think I own some tiny part of MURAL, by Julie Mehretu. If I can figure that out, I feel okay too about asking Mehretu why the piece had to be titled MURAL, instead of something maybe a bit gutsier? (Courtney Comstock complains that the piece doesn’t have a title, which is apparently even worse….) Or am I just hoping that Mehretu feels something more than curiosity about the rendering of global financial movements? DId she know Mark Lombardi’s work when she set to work on this project?

Is it too much to hope that when Mehretu’s work is taught in the future, that the fortunes of Goldman Sachs will be discussed too?