One on One: Tanya Zimbardo on Howard Fried

[Alongside our weekly in-gallery curator “One on One” talks, we post regular ‘one on one’ bits from curators & staff. Follow the series here. Today’s post is from assistant curator of media arts, Tanya Zimbardo, who will be talking about Fried’s Inside the Harlequin: Approach Avoidance III and II, this Thursday at 6:30pm.]

From the start of the 1970s, Howard Fried put forward one of the most compelling bodies of conceptual film and video work. The artist belongs to a generation that radically redefined sculpture and questioned the role and form of art in society. A leading figure on the West Coast in the intertwined fields of performance, video, and installation art as they emerged, he was also one of the key advocates of these mediums in founding the New Genres department at the San Francisco Art Institute in that era. Exploring his own psychology as a point of departure, his abject sculptural and performance-based works investigated more broadly the problems and processes of how we perceive and learn information. The paradox of choice was central to his study of scenarios in which individuals are faced with competing options: from the routine of ordering food in a restaurant to the rhetoric of political television advertising. His meticulously crafted works probe issues of criteria, judgment, control, and predictability in analyzing how people deal with conflict situations and group power dynamics. Fried’s conceptual practice was tethered to everyday activities, interactions, and possessions that held personal meaning in his life. The artist frequently placed himself as the protagonist in his witty, disquieting works. Whether humorously performing the role of a victim of his own ambivalence, or the role of a mindfucker who constructs a frustrating situation that his participants must indirectly learn to negotiate, he implicates others in the decision-making process. 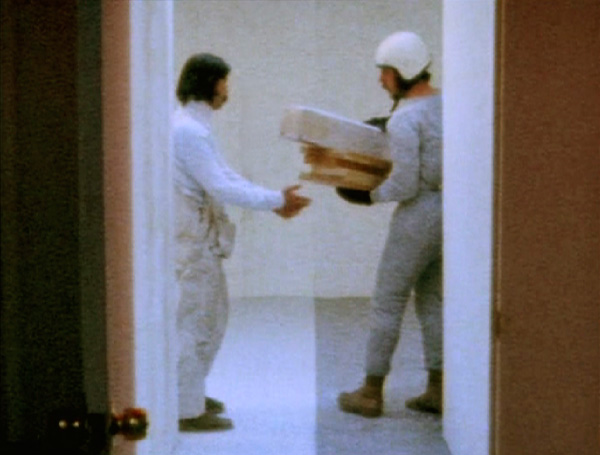 Objectifying the problem of indecision, specifically the basic type of psychological conflict known as approach-avoidance that arises in pursuing a goal or activity that is both attractive and undesirable, is the framework for several early pieces, notably Inside the Harlequin (1971). This installation consists of two silent Super-8 film projections joined at the seam and subtitled from left to right Approach-Avoidance III and Approach-Avoidance II. The unsynchronized film loops of slightly different lengths (approx. 12 minutes) echo the endless cyclical pattern of a conflict without resolution.

Fried often used structural opposition: two characters, two teams, two goals, or two systems pitted against or played off one another. Here, the artist divided his warehouse studio in San Francisco into two parts, the floors of either side painted a different shade of gray. Two men are restricted to opposite sides of the space, while the third (Fried) moves freely—embodying the idea of a consciousness considering more than one position or vantage point. He crosses the line again and again—relating either cooperatively or antagonistically to the other two. An arrangement of the artist’s belongings on the darker side diminishes in successive shots as a man hands off various objects to the one bound to the lighter side. Fried assists with the bigger items, including a two-man chainsaw we see him use cooperatively in the other projection. Echoing the motif of splitting in the piece, the men decimate the functionless architecture of stacked sheet-rocked worktables. Perhaps inevitably, the split evokes psychoanalytic associations, from opening up the repressed to the onset of a psychotic break. While on the one hand, the double ensures against loss, on the other, the split has a destabilizing effect. 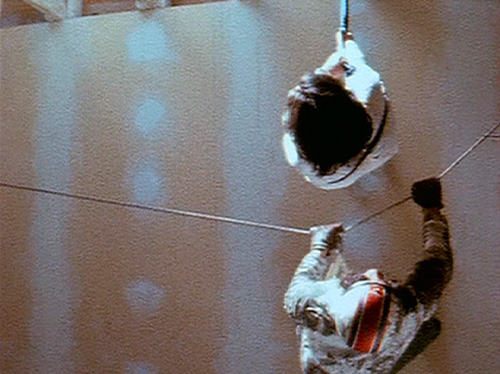 Each of the two films features two pairs of opposing actions—contrasting the active vs. passive camera movements, the established vs. disrupted positions of objects. Inside the Harlequin cycles through actions 1-4 on the left and 5-8 on the right. However, there are two sequences (3 and 7) that appear in both films in which the action crosses over the studio, as well as ‘crosses over’ the dual projection, so that at times we simultaneously see different moments of the same scene. In the second cross-over sequence, we observe the trio rappelling from the long wall of the studio. When Fried crosses the center line to one of the sides, the man assigned to that side also stands on the wall parallel to the floor, while the other one stands on the ground. Playing with closeness and distance, the projections alternate between views of the long and short axis of the studio, and the dyadic and triadic relationships of the figures.

As its title suggests, the dual projection is triangulated by an absent, first film, Approach-Avoidance I (1970). The complex editing pattern of Inside the Harlequin was essentially built on time sequences developed in this earlier animated film, of the typed letters in APPROACHAVOIDANCE. The scenes in III and II are divided into segments analogous in duration to the positions of the letters in that first film, used to symbolically illustrate directional and velocity changes in the conflict pattern. Fried’s characteristic wordplay, in this case, is a subversion that extends down into the underlying details that act as the subconscious of the piece. The sequencing reverses in the projection on the right. Through its use of thematic polarities, physical metaphors, and movements and reversals in space and time, the work addresses the tendency expressed in approach-avoidance conflict of being more repelled (i.e. rappelling) and less attracted by a goal that one is moving toward, and vice versa. The artist places emphasis on the ongoing artistic process of re-evaluation over completion. The purity of his mathematically generated system is cut with cheap drama and laced with personal example. While Fried’s filmmaking is primarily structural, there is something about the distinctive content—physical comedy, raw aggression, or makeshift attire—that seems to evoke multiple associations with popular cinema amongst viewers. The chaotic content and casually executed tasks allow the overall tightly structured piece to breathe.

The piece was filmed over a week at 16 Rose Street (overlooking Market), the site of a number of Fried’s most iconic performance actions and videos, sometimes featuring neighboring artists in the building, like sculptor James Pennuto, who we see here in the white painter’s overalls. David Sherk (helmet and padded gray sweatsuit) and Fried would wrestle again for Indian War Dance, the first part of Fried’s notorious performance for Documenta V (1972)—drinking at the ring of a bell, their sobriety manipulated by a judge until they collapsed. Drawing on his experience with this sport, Fried’s interest was not only in the physical involvement and competition, but the idea of kinesthetic feedback. As he reflected in Avalanche magazine, “There are what seem to be physically sadistic parts of the action, inflicting pressure on the opponent, and masochistic counterparts, receiving similar pressures. One is active and the other passive, but you get feedback either way.” The artist studio here resembles a cross between a gym and a garage workshop. Athletic training as an analogy to artistic production would be made explicit later in well-known studio actions like Tony Labat’s Terminal Gym (1980-81) and Matthew Barney’s DRAWING RESTRAINT 1-6 (1987-89).

Like his peers Dan Graham and Bruce Nauman, Fried is one of the few video art pioneers who had also previously created film installations specifically for the gallery context, exploring the spatial use of multiple projections.

As a prologue to seeing Inside the Harlequin, go check out Fried’s Studio Relocation (1970) featured in The View From Here (otherwise illegible online). Exemplifying a poetics of failure, this anecdotal piece hinges on his best-laid plans going awry. Playing off of the genre of studio-based performance and the notion of the ‘artist at work’, my own exhibition The Studio Sessions explored process-oriented pieces as dialogues about the works themselves. Fried’s discursive transparency about his working method and the exhibition phase within several pieces was critical to my thinking about the condition of publicness. 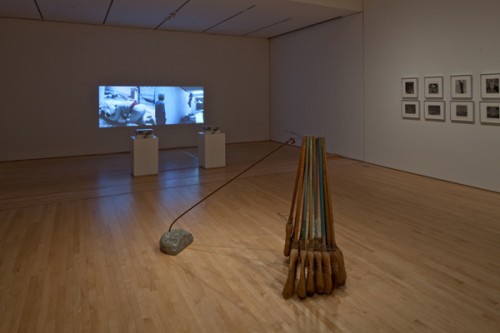 Inside the Harlequin; Installation view at SFMOMA, 2010; photo: Ian Reeves

I’ve been waiting for years for Inside the Harlequin to be on view, knowing it was slated for The Anniversary Show. The section of that exhibition Space/Time/Sound: Bay Area Conceptual Art takes its title from a major survey of 1970s performance art in which Fried figured prominently. Prior, he was included in several SFMOMA group exhibitions; his 1977 solo show focused on his sculptural installations and textual practice. Please join me this Thursday, February 4, at 6:30 p.m. and we’ll move into the galleries to discuss this collection highlight and Bay Area Conceptualism.

Tags: Bay Area Conceptualism, Howard Fried, Inside the Harlequin: Approach-Avoidance III and II, One on One, Space/Time/Sound, Tanya Zimbardo, tzimbardo