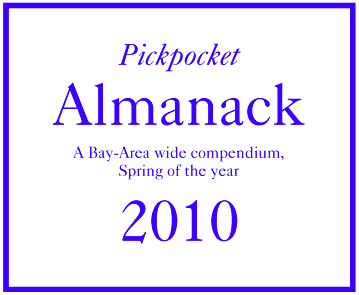 After a recent sit-down with one of the new faculty for season two of  Pickpocket Almanack, I was reminded how useful it can be to air some of the key ideas behind the program— the constellation of forces that led to its inception. But first, and for the benefit of anyone learning about this for the first time, I’ll briefly explain how Pickpocket Almanack works:

To start, we steal all the calendars in the Bay Area and compile a master list of over one hundred events happening at dozens of venues in the SF Bay Area. This list includes things like public lectures and performances, film and video screenings, workshops and other one-time events. Next (and with the advice and support of SFMOMA) we hire 5 faculty; individuals who are distinctive and accomplished cultural figures in the SF Bay Area and have a variety of backgrounds. The faculty are given the master calendar as a point of departure and asked to make a selection of 5 or 6 events taking place (at any venue) in the next 3 months. They then contextualize their selection with a title and short description, thereby transforming it into a course. Courses are made available for sign-up for the duration of one week, February 15th through the 19th. There are two possible roles during sign-up, an auditor and a participant. Once signed-up, an ‘auditor’ will receive email reminders automatically for each event. There’s also the option to join as a ‘participant,’ and be included in the email discussion (available to a limited number). Conversation takes place about the events and the course in general via this email group and is moderated by one of the participants. During the course the faculty will suggest one or more readings, and at the end of the course each faculty will arrange an informal meeting.

The Pickpocket Almanack exists somewhere in the middle of a spectrum between a recommendation list, which is typically an unorganized array of suggestions offered by, say, a friend or a trusted colleague, and a formal school or university, which has grades, homework and other expectations—as well as a community of students. In naming the Pickpocket Almanack, we intentionally omitted terms like ‘school,’ ‘academy’ or ‘university’ because we liked the idea that it could be understood and experienced in its own way, as a new entity. Any comparison to a ‘school’ (as in “school-without-walls”) should be understood as a metaphor, a rough but ultimately inaccurate approximation. This is important, because part of the goal of the program is to complicate, if not dissolve, the default hierarchies inherent in classroom education. We have also, of course, done away with the classroom.

In his study of The Learning Exchange, a network education project in Chicago from the 1907s, Gregory Squire’s considers some of the underlying philosophy, as connected to Ivan Illich’s ideas about de-schooling society:

“Ivan Illich and Everett Reimer maintain that if schools were replaced by these networks, not only would education be improved, but the quality of life in general would be better. People would become more independent, self-fulfilling actors rather than dependent, passive consumers… People would compete more on the basis of their individual desires and abilities and less on the basis of how they are labeled, controlled, and allocated by an institution. Ultimately, a more democratic social order would evolve in which people would have more freedom to determine the course of their lives and more opportunities to choose from in charting that course.”

Along these lines, the faculty of the Pickpocket Almanack have been asked to conceive of a curriculum that is porous, that blurs into the fabric of an individual’s life in the Bay Area. This means recommending things off-the-track of the usual event calendars and occasionally offering a spontaneous suggestion during the unfolding of the course. The popping of the academic bubble has its challenges, however.  For example: how do we construct a community of participants for the sake of meaningful discourse without regular in-person meetings? An email list has certain limitations and relies heavily on the individuals involved to get a conversation started. In this sense, the course is as successful as each participant makes it.

Responding to these considerations and learning from our first season, this Spring we’ll do a few things differently. First, for all faculty and current participants we’ll throw a kick-off party at the museum (the details available to those who’ve signed-up). And at the suggestion of one of the faculty from last season, each participant will be expected to reciprocate in some way. In other words, each person signed-up as a full participant will be asked to give something back to the faculty and course participants in exchange for their free involvement in the course. This might be something as simple as contributing food to the final meeting, offering an additional reading connected to the course, or organizing an additional event. Every participant will also receive an ID card that gives them free access to public programs at SFMOMA.

Finally, I’ll introduce the new faculty for the Spring of 2010: Claudia Altman-Siegel is the owner and director of Altman Siegel gallery; Jim Fairchild is the guitarist of the acclaimed rock band Modest Mouse and lead of a new project All Smiles; Amy Franceschini is an artist, designer and educator known widely for her collaborative work with Future Farmers, Renny Pritikin is a legendary Bay Area curator, poet and currently the director of the Nelson Gallery at UC Davis; and Jerome Waag, artist and chef at Chez Panisse. See the website for full bios: www.pickpocketalmanack.org