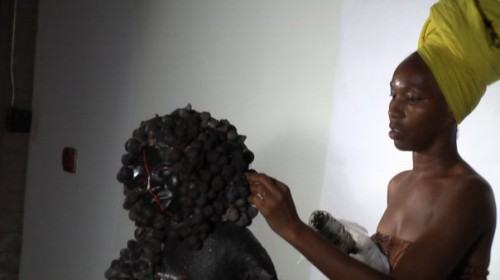 In keeping with my interest in artists that access African spirituality in their work I interviewed multimedia artist Karen Seneferu.  Seneferu is a Bay Area artist working in natural and manufactured materials to produce figures that function as new sacred objects reflective of traditional African ritual artifacts. It was probably with the literary work of Ishmael Reed that we first got hipped to the idea of new forms of sacred African ritual power embodied in contemporary Black literature and art. In 1974 Reed described his obscure short story “D Hexorcism of Noxon D Awful” or “Cab Calloway Stands in for the Moon” as more akin to gris gris dolls used in Hoodoo rituals than any writing tradition. Neo-Hoodoo is the term that Reed created for the sacred ritual traditions of what writer Marvin X calls “North American Africans.” The grande dame and main Mambo of this notion in the visual field is Los Angeles artist Betye Saar. Her mixed media installation titled “Mojotech” was shown in the “Art as a Verb” show at the Maryland Institute in 1988. “Mojotech” used discarded computer chips and circuit boards reconfigured as sacred objects. Along those same lines Stephanie Dinkins’ 1997 art piece titled “Intertextuality V1” echoed the form of Kongo sacred sculptural forms in combination with video installation. Dinkins’ piece along with “Mojotech” exemplify the Afrifuturist aesthetic associated with the intersection of sacred ritual with future focused speculations about African ways of being. Beyond the emergence of concepts such as Neo-Hoodoo and Afrifuturism Karen Seneferu’s work is inspired by her desire to create a sacred object that speaks of African ways of being. She explained her work in detail. 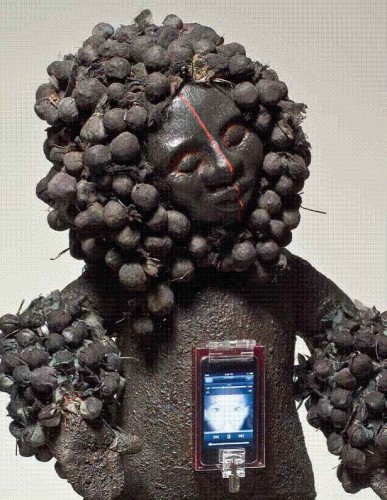 Duane Deterville: Tell me what originally inspired you to do the “Techno Kisi”.

Karen Seneferu: I initially created small soft, figurative sculptures, covering them in beans, rice, beads, and feathers as a way of creating something beautiful for myself, something that would move the energy I felt inside that needed expression. Then, I wanted them to create a desire for others to touch, speak, and listen to the figures. However, I never saw the sculptures as dolls, never as playthings. They are for me sacred images that evoke the ancestors of the past as they preside over the present. These sculptures are relics- rekindling forces through the combination of organic and inorganic properties.

Techno-Kisi has always developed out of a prism of ideas. In part out of the desire to create a monument, a memorial for healing in a space that historically has forced dehumanizing practice on the Black body, particularly the Black woman’s body as the place of cultural obliteration. This happens when the status quo attempts to remove the value, beauty, and purpose of the Black woman to her community. One example of this, for me, is the story of Sarah Baartman. Originally forms, my soft figures represented the children that Sarah Baartman did not have as a result of various methods of physical violation perpetrated against her; bodily violations that symbolized colonial control of the continent. I was attempting to address and correct, metaphorically the wrongs done by creating the Techno-Kisi.

Also, I have felt spiritually guided by Renee Stout’s work, an artist in Washington DC. It was her creation, Fetish No. 2, that was transformative for me, and I have been attempting to speak to this change as an artist, through dialogue with her work, while simultaneously linking my voice as maker of art back to the primary source or past through the sculptural work of the Nkisi.

Deterville: Can you explain what “Nkisi” is?

Seneferu: The Nkisi comes out of the Kongo Basin, designed as a container for the spirit forces with symbolic materials incorporated in them that act as a power charge. Traditionally, an Nkisi has nails all over a wooden sculpture, a few charms around the body, and a rectangular box with a mirror cover attached to the belly. This mirror is sealed and reflects the faces of those that stand before it, keeping watch over the viewers’ intentions.

I attempted to alter and speak to the ancient form of the Nkisi through my Techno-Kisi. Instead of putting nails all over it, I covered most of the figure which is about 65” x 34”x 7” with charms that are clay balls wrapped in hidden properties. I then covered them in dyed fabric, tied them with raffia, and sewed them onto the adult size, soft figure.

The California African American Museum commissioned “Techno-Kisi II,” which is exhibited at the Skirball. The first one that I created premiered at the California African American Museum in an exhibition called “Inside My Head.” “Techno-Kisi 1” initially had an Ipod on the belly. What I had done was take a sample of Kanye West’s video titled “Love Locked Down” and photographs I took of community activists’ faces and eyes. Some of the community activists included people such as Bobby Seale, Cynthia McKinney, and Tarika Lewis, as well as students, instructors, family members, and people on the street. In my “Techno-Kisi I” the eyes become the mirror reflected on those who view the video. These two opposing forms- the ancient and technological merge to create Techno-Kisi, a vehicle to navigate multiple discourses, and geo-political landscapes.

The technology resides in the belly. In the case of “Techno Kisi II”, I collaborated with Buglabs to create a console and insert a slideshow presentation of people that I interviewed from a broad cross-section of society. The interviewees answer the questions “what is a sustainable future” and “who and how is it determined?” I was interested in looking at historically excluded communities who have been deterred from participating in the dialogue and the actions needed for change. I interviewed a wide range of activists both prominent to the world of the Green Movement, such as Majora Carter, an environmental justice advocate, who promotes green-collar jobs as a route out of poverty to Tyrone Stevenson, aka “Scraper Bike King,” a youth from East Oakland California who created a mobility craze that has gained worldwide fame by incorporating art and an eco-green philosophy to change his community. There are other diverse individuals who are just as relevant. What they all have in common is they point out that in order for us to have a sustainable future, everyone on the planet must be seen as having a particular value that should be shared with the world.

Deterville: What is the Skirball Cultural Center and what was the theme of the show in which you premiered the piece?

Seneferu: Skirball Cultural Center is an established Jewish cultural institution, whose mission is to engage people of every ethnic and cultural identity to explore the center’s themes and concerns. Their purpose is to build cultural relationships across political and ethnic divides.

The show “An Idea Called Tomorrow” was co-conceived by CAAM’s Visual Arts Curator, Michele Lee, with support from Erin Clancey, Associate Curator at the Skirball Cultural Center. With an emphasis on what it would look like to create a new society, Michele asked the artists to synthesize fresh ideas and perspectives that when placed into action work harmoniously to transform the inner and outer paradigm of our existence. As artists we are addressing a broad range of social justice issues of both regional and global relevance, such as environmental sustainability, shelter for all, human equity, equal access and respect, healthy living, reconciliation and forgiveness, and cooperation and peace. Michele Lee says, in reference to the exhibition, that “CAAM and the Skirball serve as a model of what can be accomplished when institutions and people work together.”

Deterville: When I asked Seneferu whether she considered the “Techno Kisi” an Afrifuturist statement she demonstrated her knowledge of my writing on the subject and clarified her creative motives.

Seneferu: My piece has always, from the very beginning of my development as an artist, come out of organic processes. I am somewhat familiar with the term, but I have not created Techno-Kisi with the intention of placing myself within this canon. I understand that Afrifuturism addresses “pre-western” and “post-western” expression, drawing upon contemporary technology while maintaining cultural ethos. I know that another component is entering “secular” environments, honoring and requesting ancestors to come into those spaces thereby opening portals of transformative “networks” across the African Diaspora. But I would say that where I am and what I am doing as an artist comes out of observing and absorbing various forms of art for such a long period of time, before I began creating and this lead me to produce this innovative form.

I have started creating art very late in my life, but as I reflect I understand that I have always gathered information, imagery, energy and ideas. When I began producing art, it came out and still comes out full and complete as if I have created for many years when it has been more like 5 years off and on.