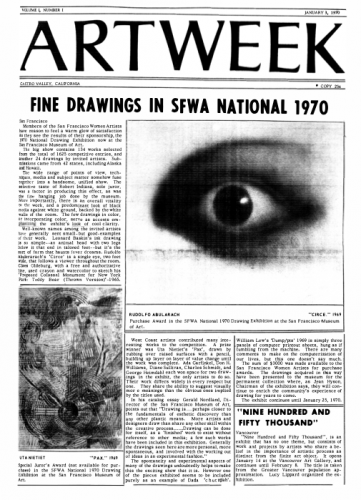 For an upcoming project I’ve been researching the first issues of art magazines produced in the San Francisco Bay Area. The SF Bay Area hasn’t been able to sustain a contemporary arts journal for a variety of reasons, but there have been at least a dozen attempts. With the help of my brave and talented intern Simon Jolly, I’ll be scanning and presenting a number of these journals in June in conjunction with the SFAC Gallery’s 40th Anniversary. We’ll also be running OCR (Optical Character Recognition) software on all the scans which makes the downloadable pdfs word-searchable, a helpful aid to research. I’m starting with ArtWeek, which has been on my mind since it ceased printing last year. While it’s never been a specifically San Francisco oriented magazine, and hasn’t been a progressively contemporary journal in well over a decade, many notable writers and curators from the Bay Area have contributed to its four decades in print.