Mapping the city by falling down 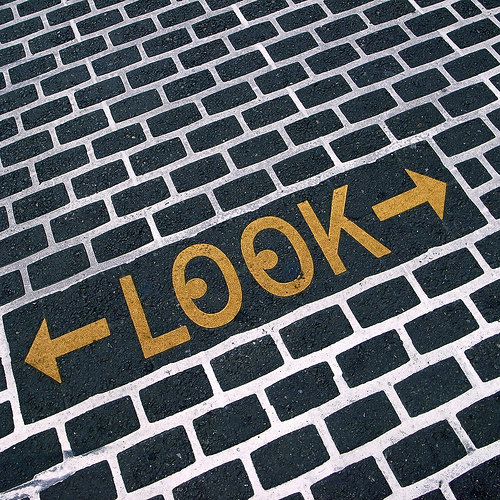 As I was stepping into a crosswalk on my way home through the Mission the other day, a teenager just ahead of me did a quick dance step as he crossed into the street. The manueuver was as brief as it was out of place—a quick spin off the curb on one heel, a slide, and then a finish into regular gait, all completed before the second zebra stripe.

I don’t know if anyone but me noticed. It seemed like a practice move and I don’t think his intention was to transform 24th Street into a musical stage, but for a moment I experienced a synaptic firing pattern that I last laid down watching West Side Story—except that in this case I was out in public, in the middle of a familiar and mundane architectural context that, if it said anything, it said “this is your walk home from BART, three hundred and fifteen steps and you should reach for your keychain.”

After a brief wave of confusion and disorientation, I had an impulse to thank him for providing the unexpected mental detour. The more I thought about it, it seemed that something subtly profound had been demonstrated: the agency of an individual (or a coordinated group) to make a small, ambiguous tear in the fabric of expectation woven out of space and situation. Wish I’d gotten a picture.

At the risk of loading too much theoretical freight onto this train of thought, I’ll throw out there that the moment was a plausible example of the unitary urbanism of the Situationists — a blurring of the line between function and play. The fact that it’s hard to categorize a lone crosswalk dance move with no additional explanation (was it “art,” i.e. dancing, that got resampled into a space otherwise dedicated to “non-art,” i.e. walking?) suggests that the psychogeography of a crosswalk is malleable. But holding onto the ambiguity of non-normal situations is delicate work: too much reframing force and they quickly become something recognizable again, like clay that hardens the more you knead it.

Had there been two kids dancing together, or had the move lasted too long or been accompanied by spectators, I could have found a familiar category for it. We have a lot of categories for unusual behavior in public space, especially in San Francisco: protest, festival, homelessness, and the ever-sinister and chameleonic guerrilla marketing, to name a few. And then of course there’s honest-to-goodness Art In Public Space — social practice, performance-based, transactional—what have you. The problem with many of these categories is that we’re used to them and at some level, they allow us to disregard what’s happening once we’ve identified it as familiar. Some of the most powerful reframing moves aren’t perceived as art or as anything else. They’re inexplicable.

Earlier this month, Rebar met a crew of artists in Paris called Pied La Biche (that’s Francaise for Foot of the Doe we think…perhaps a distant lexical cousin of Rebar?) who have an interesting approach to situational monkeywrenching. In these dream-like, slow-mo sequences they captured a hired actor and Freddie Mercury lookalike falling down on train platforms, jumping turnstiles, and sprinting through the streets. 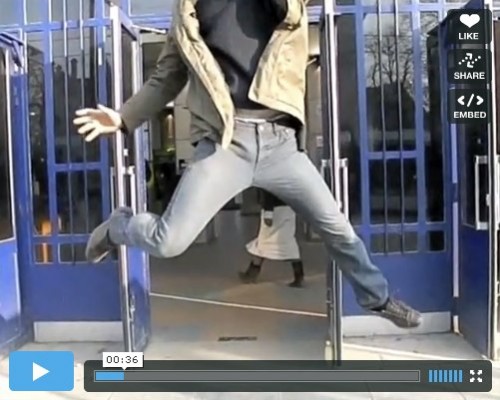 The slow motion camera, hidden in a baby stroller, captures the ambiguity they engineered as registered on the faces of bystanders, or in this case, “accidental participants.” The actor walks the line of plausible deniability —that is, that that what he’s doing is anything out of the ordinary, though it surely feels like it is. (Cameras in the open quickly undermine any claim to plausible deniability.) These situations are probably remembered as odd, maybe even inexplicable to those who saw them. 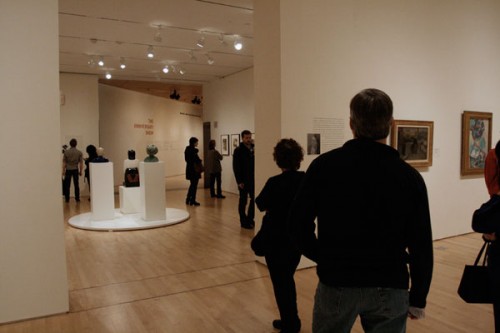 This kind of intervention has been called “paraformance”—a performance that is “beside” or “outside” of a performance. We’ve experimented with it in one of our past projects, Commonspace. We’re interested in it as a research tool because, like a beam of electrons aimed at a subatomic particle, the only way to measure invisible things is to carefully aim a force at them and see how they react. Using paraformance as a mapping tool has been one way that we’ve tried to understand spaces with ambiguous and unwritten social codes.

In a sense, paraformance is something like Tino Sehgal’s encounters now at the Guggenheim, except disguised as something even more ordinary. It slowly breaks the surface of normal, hovering at the emergence threshold where people are open to new experience (they’re probably pre-selected to be open to new experiences if they’re in the Guggenheim). The social script of the public space of the museum gallery is even more strongly determined than other public spaces. The whiter the walls of the gallery, you could say, the more scripted. We wonder, what postures, gestures, movements, situations define the pyschogeographic contours of the museum visit?