One on One: Lisa Sutcliffe on Jim Goldberg

Alongside our weekly in-gallery curator “One on One” talks, we post regular ‘one on one’ bits from curators & staff. Follow the series here. Today’s post is from assistant curator of photography,  Lisa Sutcliffe, who will be talking about Jim Goldberg’s  The Orchard this Thursday at 6:30pm. And look for a conversation between Lisa and Jim, upcoming this spring on Open Space. 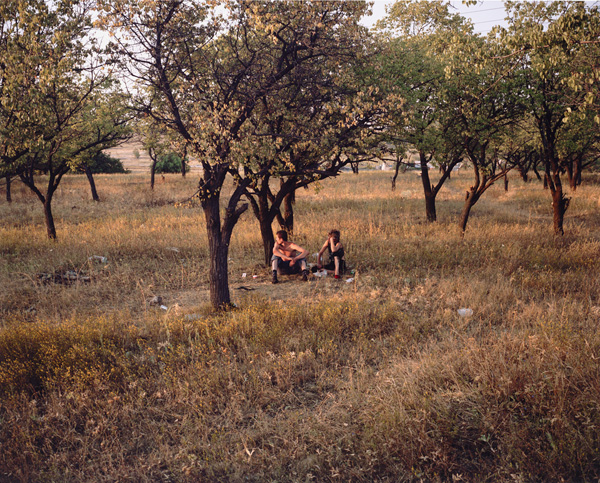 Jim Goldberg, The Orchard, 2006. Chromogenic print. Purchase through a gift of an anonymous donor and the Accessions Committee Fund

It’s almost impossible to get a full sense of Jim Goldberg’s photographic style from just one picture. A complex storyteller, he weaves his own artistic narrative by collaborating with people on the margins of society through photographs, film, text and ephemera. Working across media and in diverse formats including 35mm, Polaroid land camera and 4×5, his multilayered installations test and blur the boundaries of traditional documentary photography. From his earliest pictures documenting the rich and poor residents of San Francisco, Goldberg has sought to give voice to his subject by asking them to write on his pictures. In Raised by Wolves, his photographs were accompanied by his own innovative personal account of kids living on the streets of Los Angeles and San Francisco. His most recent series, Open See, began with a 2003 commission from the Greek Olympiad to photograph immigrant and refugee communities in Greece. He spent the next six years tracing the migration of these displaced people to places as diverse as Ukraine, Democratic Republic of Congo, and Bangladesh. The resulting work is a complex analysis of the hopes and dreams that led so many people to seek a better life in Europe and the cruel realities they faced on their journeys. For Open See Goldberg further develops and enriches his style with the inclusion of photographs such as The Orchard that are far removed from his hallmark snapshot aesthetic.

Upon first glance, The Orchard tells a somewhat familiar story of two young people enjoying the sunshine in a pastoral field. For me it calls to mind a tradition of artists depicting the everyday that begins with Édouard Manet’s The Luncheon on the Grass (Le déjeuner sur l’herbe) of 1863 and extends to Jeff Wall’s Tattoos and Shadowsfrom 2000 (also currently on view at SFMOMA). In his painting of a group of men and a nude woman picnicking in the grass, Manet answered Charles Baudelaire’s call in The Painter of Modern Life to paint contemporary scenes that captured “the passing moment and all the suggestions of eternity that it contains.” The alienation of the figures from each other and the abstract and unfinished nature with which the paint was rendered led to its ultimate rejection from the Salon. Jeff Wall reinterprets the iconic scene in Tattoos and Shadows, a picture of three emotionally isolated figures reclining in a backyard. Rather than evoking a narrative, the posed image highlights the rich visual qualities such as the play of light and shadow on their inked skin. As part of a larger documentary series, The Orchard was not made in direct response to this work, but it certainly engages with this tradition.The remote orchard in the far eastern reaches of the Ukraine at first seems romantic—even idyllic—recalling the Garden of Eden in its symbolic construction. Upon closer inspection, however, details such as the debris-strewn dry grass, the ragged clothing of the unemployed drifters and their suspicious and somewhat dejected body language reveal a more complex and far from idealized vision of the modern experience.

Please join me on Thursday evening at 6:30 pm to explore this work further, and stay tuned to the blog for a conversation with Jim that will offer an in-depth look at his thoughts and process.

Tags: Jim Goldberg, Lisa Sutcliffe, lsutcliffe, One on One, The Orchard