When I visit SFMOMA I am both an outsider without status and an artist in my own right, with a peculiar variety of privilege. Being a writer, I’m not central to the Bay Area art scene, but I bisect with it in overlapping circles. If you know any curators, the first thing that you’ll realize is that in private they love to act out, to throw off the formal constraints of writing copy for catalogues and signage, or whatever they call those informative blocks of text that hang on the gallery walls, from which the first person in forbidden. In private they take enormous pleasure in disclosing, in writing the forbidden, getting all personal and critical and gossipy, throwing around the first person with abandon. Get them alone and they’re eager to extricate themselves from the official discourse of the museum, to show the human side of the process, all the insecurities and resentments and near catastrophes. They expose their feelings about their jobs, and how at times when rushing around the museum they’re stopped in their tracks by the wonder of a piece of art.

Even with my privilege, there’s something about art museums that makes me feel diminished, like I need to be on my best behavior: all those rules for participation, you can’t bring in any water, if you want to carry your backpack you have to carry it in front of you, don’t stand too close, don’t touch, and everywhere the noticing guards. The whole set up makes one long to act out, to do something naughty. In the late 90s I brought the students from the composition class I was teaching at the San Francisco Art Institute to the museum to write about Kara Walker’s room-sized installation No Mere Words Can Adequately Reflect the Remorse This Negress Feels… (1999).

Kara Walker, No mere words can Adequately reflect the Remorse this Negress feels at having been Cast into such a lowly state by her former Masters and so it is with a Humble heart that she brings about their physical Ruin and earthly Demise, 1999

Their writing instructions were to subvert the objectivity of the essay form, and to narrate their unique experience of viewing Walker’s work, including the mood in the room, the behavior of other viewers, and how they were feeling that day. So my students took in Walker’s silhouettes depicting the violence of slavery and the sexual horror of the plantation, and used it as an opportunity to use the word “fuck” in their writing. They used it over and over again, like they were wallowing in their liberty. They were being silly and libidinal, yet they were making a point, for the word “fuck” does crumble the stuffy rigmarole of undergrad comp class culture.

At SFMOMA’s 75th Anniversary opening weekend, visitors were expressing a similar zeal interacting with Felix Gonzalez-Torres’ “Untitled” (Golden) 1995, which the museum describes as “strands of beads and hanging device, dimensions vary with installation.” In other words, it’s a gold beaded curtain hanging across one of the entrances to the second floor galleries. 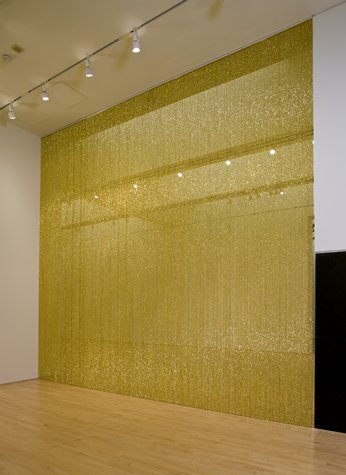 Visitors, whole families of them, were walking back and forth and in and out of the glittering beads. Children were playing peek a boo, giggling with joy at Gonzalez-Torres’ flirty decontextualized glamour. Parents were raising their infants out of their strollers up to the beads; everywhere little fists were tugging and grabbing. I was reminded of my cat Sylvia, how when I dangle a gold cord in front of her, she screams and leaps in the air in excitement—or of frat boys on the weekends, drunkenly spewing on the pavement. It’s like people couldn’t believe the art museum was allowing them to touch something, and they spun into a frenzy of touching. The crowd’s raging repression eventually blew its top, and three strands of beads were pulled down. Suddenly a line of volunteers—in their official 75th Anniversary t-shirts—was standing in front of the beads, staunch as bouncers, not letting people enter. We had to come in from the other side because, they lied, it was too crowded at that end. 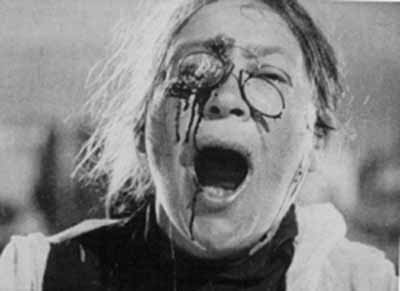 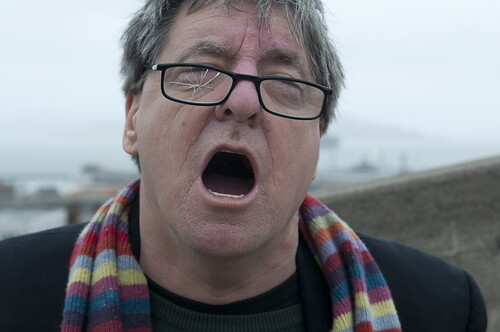 For my contribution to Open Space, SFMOMA Community Producer/Blog Headmistress Suzanne Stein has asked me to write a series of personal memoirs which explore the various ways my life has intersected with the museum’s permanent collection. In other words, I’m going to be writing a lot about myself here. The idea is to show the impact of the museum on one person in the community. For inspiration I think of Jeanette MacDonald in the 1936 blockbuster San Francisco. MacDonald plays Mary Blake, a struggling saloon/opera singer who finds herself in the midst of the 1906 earthquake. Fires rage, buildings collapse, but our hearts are double-wrenched as we watch Mary, this ordinary girl, shaken by enormity. Kota Ezawa’s 2009 restaging of the Odessa Steps sequence from Battleship Potemkin using San Francisco artists and curators similarly references how cultural artifacts are filtered through our individual awareness. Kevin Killian (my husband) addressed this personal filtering in his January 17th talk on Andy Warhol’s “National Velvet” (1963) on the museum’s fourth floor. He stood in front of the picture and asked the assembled crowd, “Do you know that, when you look online for what the SFMOMA’s Koret Education Center has to say about this picture, they list the following keywords: ‘girls, horses, horseback riding, photographs, grids, popular culture, movie stars, Elizabeth Taylor.’ I would change them to, ‘boys, cows, dying, darkness, spirals, opera, aliens, Elizabeth Taylor.’” In my portion of Open Space, I am going to stand in front of various art works in this museum and give you my version of their keywords. 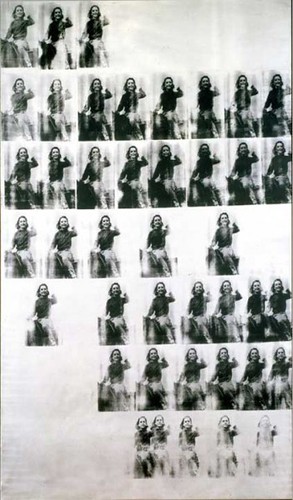