Painter Mark Dukes and Archbishop Franzo King of the Saint John Coltrane African Orthodox Church form a unique collaboration of expressive skills. The spiritual inspiration of the legendary John Coltrane’s music is the catalyst for the unique aspect of the collaboration. Dukes uses his craft as a visual artist and Archbishop King uses his as a preacher. Together with what they call “Coltrane Consciousness” they preach with the medium of painted religious icons inspired by music. This is the second installment of a 3-part interview conducted in December of 2009. You can read part one  here. 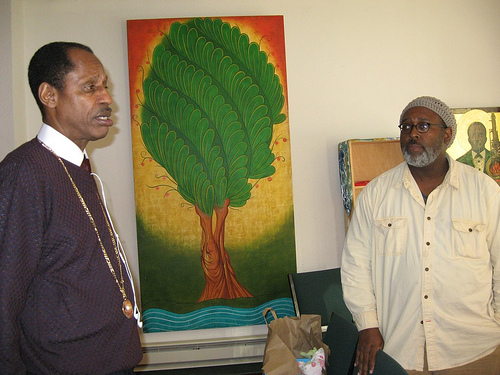 Duane Deterville: Now we’ve gotten up to the point Mark where you’ve actually painted the first Coltrane icon. Reverend King, what would be your experience of these icons as you do a service? How do they enhance the ministry? 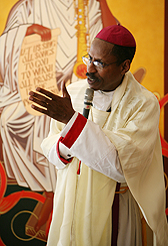 Bishop Franzo King: Well, the common phrase is that a picture is worth a thousand words. Well, maybe an icon is worth 10,000 words. And, I think they begin the preaching. The preaching begins with the visual experience. The beauty of the painting’s art is that they allow one’s inner voice to speak and their own conscious, which is really the Holy Spirit. It can teach from just doing this before I get up there to preach or anything. Just to sit here, you know, one thought produces millions of vibrations. I might make reference to this one here in particular and say that Jesus made the earth his footstool. You can preach out of that because all of these are scripturally based. If Reverend Dukes was to talk to you about the symbolism here? The fire representing the Holy Ghost, the ribbon a gift, giving it back to God, having gotten that gift. They (The paintings) preach to us in themselves.

Deterville: How many icons all together are there?

Deterville: Mark, could you discuss the symbols in a couple of the art pieces?

Detail of Coltrane Icon with Ribbon

Mark Dukes: I think, Arch Bishop King hit the nail on the head about the importance of the ribbon in the icons. Everything we have is given to God as a gift, you know. This is very simple. What we try do is to offer that gift that God has given us originally back to God. And I think that is what John Coltrane is saying when he is saying “let us sing all songs to God, let us praise to whom all praise is due, praise God. It’s a Love Supreme and he’s talking about us in gratitude singing our song. We all have a song. The song is a metaphor for what ever gift that God has given us. Let’s sing that song to God; Let’s offer that up in A Love Supreme.

Deterville: Some of the paintings are stylized renditions of trees. What inspired the imagery of trees in some of the icons?

Mark Dukes: The trees are trees of righteousness and the mosaics of a church called San Marco in Italy inspire them. They have some really wonderful trees and I just thought that we should have some trees here. It’s about nature and how we should honor nature. We’re part of nature and that’s an important part of our survival here is honoring nature.

Deterville: The icon of the Black Christ is striking and very central to the spirit of the church. Can you tell me a little about it?

Mark Dukes: This one here is of Christ enthroned. The interesting thing about this icon is that, you remember Arch Bishop King, when I actually did the drawing; I did it not knowing the size limitation of the panel. I’m serious! Having no idea that for the most part your going to’ get a four by eight foot panel. And it’s very odd to get a five by eight panel. I didn’t even know how odd it was. I did the whole drawing to scale. God knows I’m telling the truth! Arch Bishop knows I’m telling’ the truth! To scale right? I said, here Arch Bishop here’s the drawing now we have to get a panel. The Arch Bishop goes someplace and not knowing how odd it is and how hard it is to find one that is five by eight. He found a special order that someone didn’t pick up. He bought four or five of them. We put the drawing down on it and it fit perfectly. I did not have to shrink it or anything like that. It was nothing but God.

Bishop Franzo King: I think that it initiated the others where we said well we have to get all of these panels. See when he came here my idea was to get an icon done that represented our orthodoxy and that would give a vision of the spirituality and the sanctity of John Coltrane. So I was praying for God to send somebody that could do this and that’s why when I saw him I said you finally showed up. He was an answer to a prayer. I asked God to send me somebody that could do this. I didn’t know it was Byzantine style or this that an another.

But, when we came into the orthodoxy… A local Bishop came to me and said that Archbishop Hinkson is coming here from Chicago and he’s looking for congregations that he can bring into the African Orthodox Church. I didn’t know no more about Orthodoxy than a jack rabbit does Easter Sunday. Ya’ know what I mean? But then there was a brother, Bishop Green who’s a Bishop now in the African Orthodox Church. He brought me all these books on Orthodoxy and on the African Orthodox Church. Which you will find mentioned in the “Philosophy and Opinions of Marcus Garvey.” But, Mr. Garvey said that Alexander McGuire was one of his most loyal helpers. Doctor Charles L. James said to me that Garvey was dealing with the social thing and McGuire was dealing with the spirituality. Where they’re different is that McGuire wanted everybody to become African Orthodox. Garvey was wise enough to know that will not happen. But, he did all of the rituals. All of the rituals that you see for the UNIA (Universal Negro Improvement Association. Founded by Garvey — D.D.) were laid out by the founder of the African Orthodox Church.  Green came back and told me and started bringing me all of this Orthodoxy stuff and started telling me about the African Orthodox Church. He told me that it grew out of resistance to racism in the Episcopal and Anglican Church. Now I’m all excited about it and you know I still hadn’t hooked it up with that back part of the book “Philosophy and Opinions of Marcus Garvey.” When I heard that they adhere to the Western rites and they dress like the Roman Catholics I had a little disappointment, but the main man that introduced me to the Orthodox Church, George Duncan Hinkson had such a great anointing on him. The humility of this man was such that when he came out to visit me he said, “Have you been to school?” I said, a little bit. (Laughs) He said, “You like to preach?” I said, I love to preach.