The Saint John Coltrane African Orthodox Church in San Francisco’s Fillmore District is adorned with the icon paintings of Mark Dukes. Under the guidance of Archbishop Franzo King he has produced unique images of legendary musician John Coltrane inspired by a sound baptism. This is the final installment of a 3-part interview conducted in December of 2009. 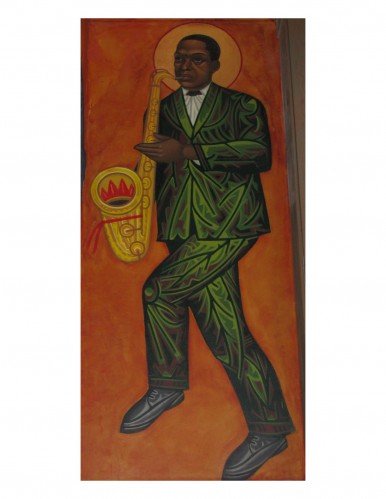 Duane Deterville: Well I’ll tell you I have the most respect for the self-taught intellectual. There’s a term for it that an Italian Marxist named Antonio Gramsci came up with. The term is organic intellectual. The kind of intellectual that the movement and the calling drives to their intellectual growth. That’s what I’m feeling from you Mark, as well as Bishop King.

Deterville: Exactly. Exactly that, it shows in the work and that’s why the work is so original. Because you can’t really learn the spirit of a thing in an art school or in a seminary. It really has to be somebody’s spiritual path in order to do that. That’s what I’m feeling.

Archbishop Franzo King: You’re right on time when you say that. When you look at this icon, do you see what he’s sitting on? 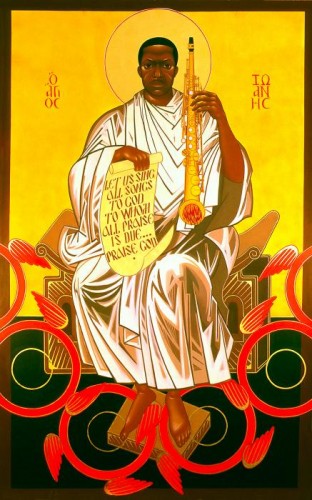 Deterville: Oh, Oh, Oh! I notice this is a stool.

Archbishop Franzo King: You’re not going to find that in Byzantine art.

Mark Dukes: I did some study, and I found the stool that I wanted. A stool that I could see Saint John on and I put it on here as a throne. This is an African throne. But there is also the circulinear (sic) vision of God, Amen. (To Bishop King) You tell us about that. Speak on that Archbishop.

Archbishop Franzo King: This is the wheel in the middle of the wheel and the scriptures say the spirit of God was in that wheel. So these circles represent the albums and the CDs that have wings of independence, indifference and liberation and all of that. 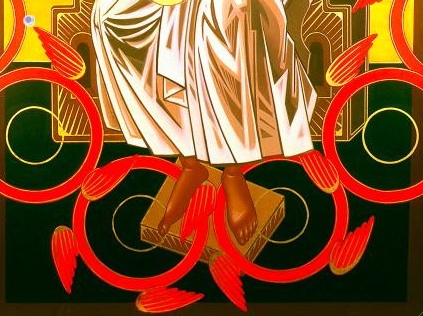 Mark Dukes: And actually it’s a kind of seraphim. The Orthodox iconic seraphim. You know, with the additional kind of wheel inside of the wheel. So we made it our own. You see what I’m talking about. I’m speaking about our understanding of it.

Archbishop Franzo King: (Pointing to the first Coltrane icon.) See, that’s Trane walkin’ the street. This is the arisen Trane, the ascending Trane. This horn here is the feminine instrument of the saxophones. This has the voice of a woman. The soprano. Which is the Holy Ghost. Now I don’t know if he knew that when he did it. But, I think that’s what’s important. This is the stuff that’s really inspired by the spirit. The Holy Spirit. So, I see the power of women in the Holy Trinity, the third part, which is wisdom. The ascended Trane. So from the heavens we have the voice of John Coltrane coming to comfort us. And we find it locked in the wheel in the middle of the wheel.

Mark Dukes: And you can see also that, I did these icons in dialogue with Archbishop King. So it wasn’t something that I just created on my own. I wanted this to be something that is canonical. Something that we really can stand on and that expresses the theology of the church. It’s not just a fanciful spiritual vision of an individual artist but something that is in the orthodox tradition. It becomes a part of the canon. And so if there is another African Orthodox iconographer then he should look at this icon before he does his own version. Because I’m starting the tradition. 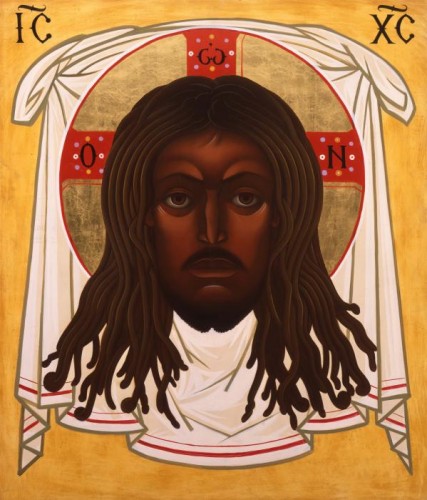 Archbishop Franzo King: You see Jesus up there and even there he’s dread.  See I was looking for this. I would have been satisfied to get a painting as big as that egg. But when you pray and you ask God for something he always has something above and beyond that. And so the brotha’ (Mark) came in with all a this other stuff.

Deterville: Thank you both for sharing your journey in the creation of this worship space called the Saint John Coltrane African Orthodox Church.