“My God, what’s happened to David?”

SFMOMA turns 75 this month. We’ve just published a new (and very beautiful) collection catalog, 75 Years of Looking Forward, highlighting, as the curators of The Anniversary Show and the catalog, Janet Bishop, Corey Keller, and Sarah Roberts, write, both “the inarguably significant and the admittedly idiosyncratic” of the museum’s collecting, exhibiting, and presenting history. This month, and into the spring, we’ll be featuring excerpts from the catalog here on the blog. Today, the first few paragraphs of Janet’s essay on Bay Area Figurative Painting and the texture of the long running SF Art Association annuals. Enjoy. 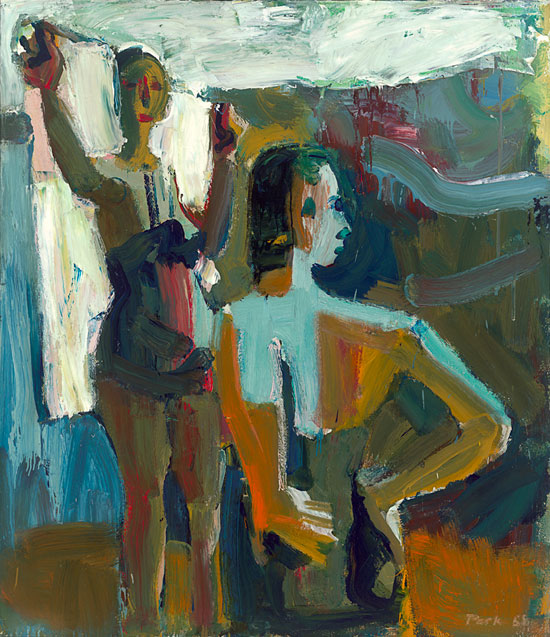 “When something has occurred and re-occurred annually in San Francisco seventy-three times, it’s certainly an event to be recorded on this broadcast. When it’s as controversial as the San Francisco Art Association’s annual painting and sculpture exhibition, you can bet I made tracks for the San Francisco Museum of Art.”

From the time the San Francisco Museum of Art (or SFMA, now SFMOMA) opened in the War Memorial Veterans Building in 1935 through the mid-1960s—an era before alternative and artist-run spaces or much of a commercial gallery scene—the most immediate way for Bay Area artists to gain exposure for their work was through the San Francisco Art Association (SFAA) Annuals, which were hosted in the museum’s galleries. SFAA was established in 1871 by a group of artists “for the promotion and encouragement of art in the community,”  and in 1880 the group began holding periodic juried exhibitions modeled after the salons of new art in Paris. SFAA Annuals accounted for a considerable portion of SFMA’s programming in its first few decades. These shows, as museum director Grace McCann Morley explained, “were carefully organized, were large and representative, and they certainly were valuable in stimulating the artist community, giving it a chance to make a showing before the public.” As much as the museum’s other shows, the Annuals, assembling both unknown and established figures, were the place to see and debate modern art; more than any other SFMA shows, they provided a direct link between the museum and local artists. The Bay Area’s first distinctive contribution to twentieth-century art—in which several leading painters turned to the human figure as subject matter during the height of Abstract Expressionism—emerged in the context of these shows. 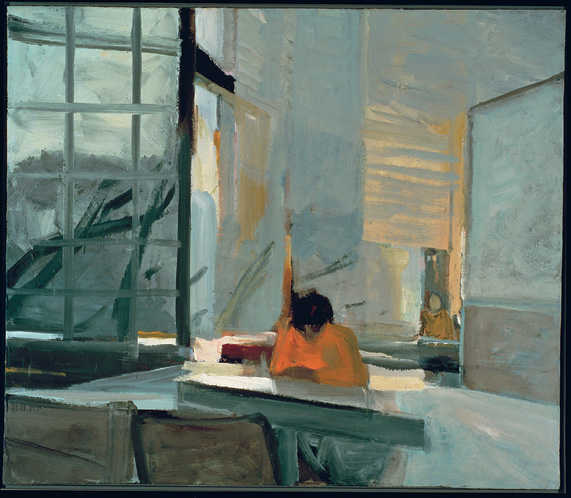 As indicated by their long, ﬂat-footed titles (e.g., 73rd Annual Painting and Sculpture Exhibition of the San Francisco Art Association), the Annuals were divided by medium, with “oil and sculpture” being the main attraction and other events for works on paper.  Following a call for entries, receiving stations were set up at the museum’s McAllister Street entrance. Our old typewritten ledgers recording the movement of art in and out of the building tell us that most of the thousand-plus entries for any given show were hand-delivered by the artists. They also reveal who stood in line with whom. In the ledger for the 1958 Annual, for instance, William H. Brown and Joan Brown, married since 1956, appear in succession, and Joan Brown‘s next husband, Manuel Neri, pops up shortly down the list. (Joan Brown and Neri were accepted that year; William H. Brown was not.) And while artists generally entered one work each, sometimes they entered more than one, a gap between an artist’s first and second appearance in the log suggesting a trip back to the car for a second work, or second shot at acceptance (the chances were usually around one in ten). Artists from other parts of the country participated, too, but the vast majority hailed from Northern California, each resulting exhibition effectively offering a barometer of the region’s modern work through the eyes of the association-named jurors. The shows’ brochures, which cost a quarter, included lists of the jurors, selected works, and prizewinners, as well as impassioned prefaces by Morley that reveal her ongoing pride in the local scene.

Over the course of the 1940s San Francisco had become a vital western outpost for Abstract Expressionism, fueled by the presence of Clyfford Still. His tenure at the California School of Fine Arts (CSFA, now the San Francisco Art Institute) from 1946 to 1950, along with those of Mark Rothko in the summers of 1947 and 1949 and Ad Reinhardt in summer 1950, made a dramatic impact on local artists. Equally important was the remarkable string of solo presentations of abstract work at SFMA: Arshile Gorky in 1941, Still in 1943, Jackson Pollock in 1945, and Rothko and Robert Motherwell in 1946. The energy around abstract work crystallized with a presentation of Still’s dark, craggy canvases at the Legion of Honor in July 1947. While hardly appreciated by the public at large, nonobjective painting was clearly considered the most vanguard form of expression, and Morley and the SFAA leadership were in sync on its merits. 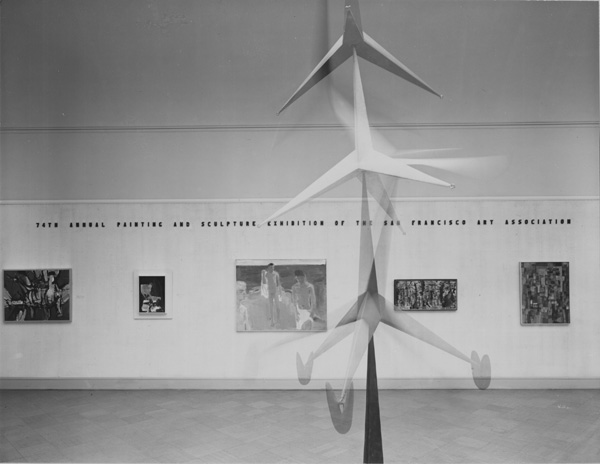 Still refused to participate in the juried shows (or even any group show) and advised his students against it: “We’re grown men, not like children who put their paintings on the wall and hope for a gold star. I told them to wait until the museum came to them.”  Nonetheless, the Annuals were a big deal, regularly attracting submissions from those just starting out as well as “the big guys,” as Robert Bechtle called them—artists like David Park and Richard Diebenkorn who had both coveted teaching posts and significant exhibition track records.

By the time Park made his submission to the 70th Annual in 1951, he was a highly respected painter and teacher at CSFA and had just served as its acting director, in the summer of 1950, between the tenures of Douglas MacAgy and Ernest Mundt.  He was also a longtime participant in the Annuals. He had shown three paintings in the museum’s inaugural year and from 1935 to 1950 was included in no fewer than twenty SFMA exhibitions, half of which were SFAA juried shows. The arc of his career reveals shifts in his practice over time: both Social Realism and Pablo Picasso made strong impressions during his early years, followed by a relatively brief period in the late 1940s when Park, like most of his peers, worked abstractly.

Given the deep commitment to abstraction among most progressive local artists, Park’s debut of a whole new figurative style in the early 1950s sent shock waves through the community. Until then, the general debate between figuration and abstraction concerned a more academic version of the former, with SFAA having developed a reputation for privileging the latter. In explaining the tip toward abstraction, Morley stated:

“Representational painters tend, in our current period, to be less interesting, able, and creative than those working in other forms of expression, and they therefore often form a large group among the rejects in a juried show. They tend to fall into the group that are, shall we say, less adventurous, while the non-representational, abstract, semi-abstract segment of contemporary art tends to attract the artists that are more exploratory and creative.” 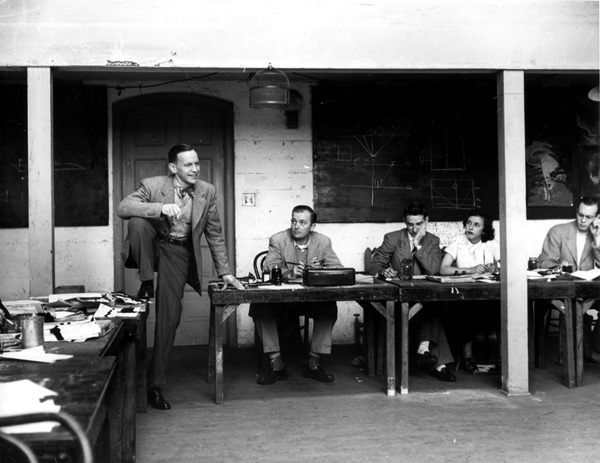 But Park’s new figurative work was of a different order. The first such painting to be shown publicly was Rehearsal (1949-50), in which Park picked up a favorite (and personal) subject: an assembly of musicians more or less from the pianist’s point of view. It was exhibited at an SFAA Members’ Exhibition at the M.H. de Young Memorial Museum in the spring of 1950. However, it was his submission of Kids on Bikes to the spring 1951 Annual at SFMA that caused considerable commotion. The jurors (James McCray, Glenn Wessels, and Hamilton Wolf) clearly recognized something powerful going on in the boldly painted scene, with its dramatic shifts in scale, and singled it out with one of the top awards—the SFAA Prize for Painting ($250). Abstract painters Edward Corbett and Hassel Smith were utterly unimpressed with Park’s submission, and Richard Diebenkorn, who was living in New Mexico at the time, recalled thinking, “My God, what’s happened to David?”

Park’s discontent with nonobjective painting had been brewing. He was turned off by the cult following that Still had managed to attract and was increasingly frustrated with the forced quality of his own painting. Sometime in 1949 Park made his now legendary trip to the Berkeley city dump, bringing with him as many of his abstract canvases as he could fit into the family Ford. He must have needed a totally clean slate, as painting over the rejects would have been more in keeping with his usual practice and economic reality. Over the course of the next few years, his close friends and colleagues Elmer Bischoff and Diebenkorn likewise put the figure at the center of their practices and along with Park formed the core of a new direction in Bay Area painting that challenged the community’s expectations of modernism. 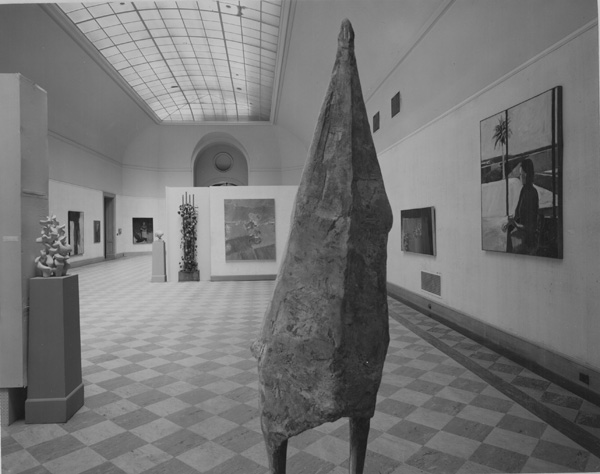 Janet Bishop’s essay continues, describing the arc of Bay Area Figurative Painting in greater detail, including critical response and the end of the SFMA Annuals. Many of the works described above, or work by artists mentioned, are on view as part of our suite of anniversary exhibitions opening January 16.