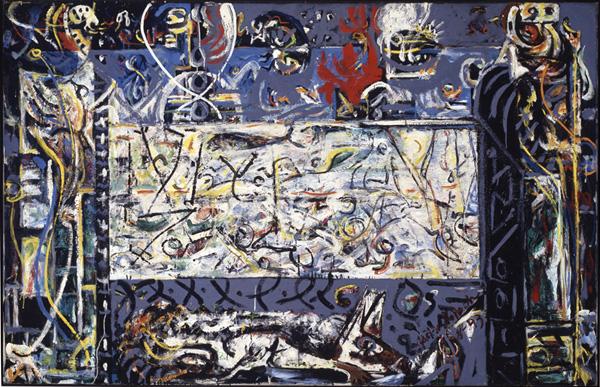 SFMOMA turned 75 last weekend. We’ve published a new collection catalog, 75 Years of Looking Forward, and this month we’re  featuring excerpts from it here. Today, a few paragraphs on the museum’s acquisition of Jackson Pollock’s Guardians of the Secret, focusing on the correspondence between two of the artist’s earliest champions, Peggy Guggenheim and Grace McCann Morley. Guardians of the Secret is one of the most important paintings in the SFMOMA collection, and is key to understanding both Pollock’s development and the development of the American painting practice that followed.

from Flare and Spatter and Fury: Jackson Pollock in San Francisco

…………While today it is difficult to conceive of a time when promoting Jackson Pollock meant a hard sell, the historical record takes us back to an era when this emerging artist offended, confused, or simply did not interest the majority of the art world. [Peggy] Guggenheim had a close professional relationship with another female art world pioneer, Grace McCann Morley. Morley, like Guggenheim, had an eye for and an interest in groundbreaking contemporary art, and one of her main objectives as the first director of SFMA [SFMOMA, then the San Francisco Museum of Art], was to bring this work to her audience. In 1943, the year of Pollock’s pivotal first New York show, Morley and Guggenheim began the extraordinary correspondence that led to Pollock’s exhibition at SFMA and the museum’s subsequent acquisition of Guardians of the Secret.

In September of that year, Guggenheim wrote to Morley about the new painter she had discovered. A month later, Morley wrote back that she was glad to learn of this new artist and noted, “Perhaps something can be done about having an exhibition here next summer.” Soon after, Morley saw the Pollock paintings in person and she, too, became a significant champion of his work. She began a letter-writing campaign to the directors of all the major West Coast museums, including those in Seattle, Portland, Santa Barbara, Pasadena, and Los Angeles, in an attempt to convince them to take a solo exhibition of this unknown abstract painter. Morley wrote,

“We are very much interested in having a one-man show of the works of Jackson Pollock. . . . The group is to be shown next March at the Chicago Arts Club and either before or after is available to us and anyone here on the coast who may be interested. In any case, we shall bring the show out, for we feel that Pollock is an important new personality whose work deserves to be better known. I saw a considerable group when I was in the East recently and found the interest was well sustained, from my point of view, and that the quality of the work was fine.”

This promotional push was to no avail, and Morley followed up with Guggenheim in January 1945, writing, “I find we have room for the Jackson Pollack [sic] show after April 15th and I judge from your wire that it is free after Chicago. I suspect we shall not find many takers for it out here. It is a little beyond most of the museums.”

The show came to SFMA in August 1945, after stopping that March at the Arts Club of Chicago. The museum presentation was essentially composed of the same works included in Guggenheim’s 1943 gallery exhibition. Among these was the first painting that had so intrigued Mondrian, Stenographic Figure; two untitled works from 1943, extremely prescient abstractions that show Pollock’s early use of paint sloshing; and Pasiphaë (1943), which embodies the disintegration of internal geometries and the emergence of the allover, gestural compositional style for which he is best known. Additionally, the exhibition included two works that are very closely related to Guardians of the Secret in both gesture and color: The Magic Mirror (1941) and Male and Female(1942–43). The latter, featuring gestural brushstrokes around a central white plane similar to that in Guardians of the Secret, was likewise a critical step toward the compositional development of the Guggenheim mural. Finally, a selection of smaller untitled paintings and lithographs rounded out the show. 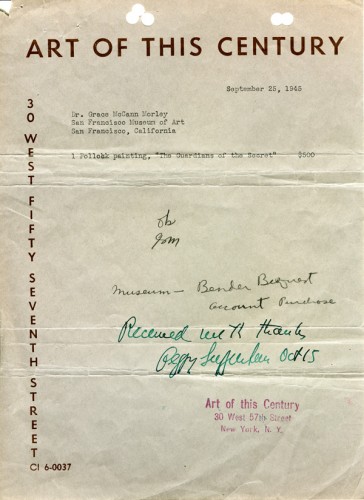 Despite the lack of interest in Pollock’s work on the West Coast, as evidenced by the single venue and the absence of any sales of his work to the San Francisco community, the show received an astonishingly perceptive review in the San Francisco Chronicle from local critic Alfred Frankenstein. He wrote, “The flare and spatter and fury of [Pollock’s] paintings are emotional rather than formal, and like the best jazz one feels it is the result of inspired improvisation rather than careful planning.” Morley forwarded this to Guggenheim, who responded:

Thank you for sending me the review of the Pollock show by the young critic in San Francisco. It was a very good review, and it is extremely gratifying to have one like that occasionally. The notices which Pollock received during his Chicago show were so notably stupid that I was doubly pleased with this one, as well as Pollock, who felt that it was an intelligent and sensitive appraisal of the paintings he had sent.

Indefatigable in her quest to support the artists she saw as most promising, Morley pushed her acquisitions committee to purchase her favorite of the paintings from the exhibition. Early on, Morley had commented to Guggenheim that if she could have her choice, she would purchase Guardians of the Secret for the museum’s collection, writing, “It is a powerful and fine painting. However, our funds are very small. . . . Unhappily the price of a Pollock painting [Guggenheim was asking $750] is already considerably out of our reach.” In a deal that seems fantastical to those familiar with today’s art market, Morley negotiated Guggenheim down to $500, and after what she describes as a “considerable struggle” persuading her acquisitions committee, she purchased Guardians of the Secret for SFMA. Guggenheim’s handwritten response to the news states:

I am so happy you bought the Pollock. He will be delighted too. It is a great joy to me to have him recognized as you can imagine. I feel he is my one great discovery. My baby— . . . Many thanks for all your efforts in the matter.

All letters between Peggy Guggenheim and Grace McCann Morley: 1945 Galleries: Art of This Century; Office of the Director 1935-58, Administrative Records; SFMOMA Archives.