The work of spiritual icon painter Mark Dukes has graced the Saint John Coltrane Church now located in the Fillmore district since 1992. During a spiritual awakening in 1989 that he describes as being baptized by sound, Mark was introduced to the music of John Coltrane by Archbishop Franzo King. Bishop King Founded the Saint John Coltrane Church in 1971 under a different church name. Today the Church is located at 1286 Fillmore Street in San Francisco and it houses the impressive religious icon paintings of John Coltrane by Mark Dukes. I spoke to the two of them at the Church on December 18th, 2009. This is the first installment of the 3-part interview. 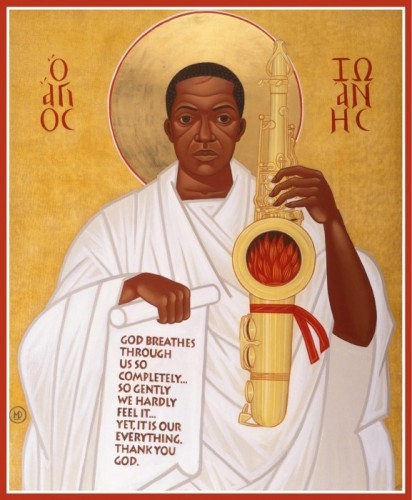 Detail from Coltrane Icon at The St. John Coltrane Church

Duane Deterville: I want to talk specifically about this interaction between and synthesis with Jazz, spirituality and visual art. The painted icons in the Saint John Coltrane Church are interesting to me on a couple of different levels. I’m interested in art practice that uses modes of spirituality based in aspects of the Black experience such as the history of the African Orthodox Church. Art work that uses Jazz aesthetic as its inspiration, artists that use their spiritual practice as the primary part of their art practice. You know that there are many Jazz musicians that are also visual artists. The Great trumpeter Bill Dixon, pianist Muhal Richard Abrams…

Bishop Franzo King: Did you know that? Alice Coltrane sent me an original copy of John Coltrane’s “A Love Supreme.” But in one of them he had drawn something on it. It was a cloud with a face on it and it was breathing…our god breathes through us so completely so gently we hardly feel it. That was written on it. When I visited cousin Mary’s there were drawings on the wall that John Coltrane did. [Coltrane’s cousin Mary Alexander lived with him and his family in Philadelphia. She witnessed Coltrane making the watercolor drawings that adorned the house – D.D.]

Bishop Franzo King: Oh he was a visual artist as well. I don’t think he put so much into it say like Miles did. But, yeah…He knew the need to express himself in that way.

Deterville: So Mark, where did you get your initial interest in this Byzantine tradition of icon painting. How did you originally gain an interest in that? Maybe we can start at the beginning and take the story all the way to when you created these icons here in the Coltrane Church.

Mark Dukes: Well, when I was in art school. I started reading the Bible and I had a spiritual experience just by reading the Bible. You know, I got down on my knees and accepted Jesus in my life and it wasn’t in the church, ya’know. It was kind of interesting because I had a problem with the church ever since that time because I got saved not in a church but just by reading the Bible and then when I went to the church, right, I started seeing things that weren’t really in the Bible. I thought love was supreme even back then and I didn’t really see that in the church. You know, its all about A Love Supreme. It was kind of interesting in hindsight you know that it was inevitable that I was going to be here at the Saint John Coltrane African Orthodox Church in some capacity. So, I started on a spiritual journey that kind of like lead me here. But before I got here I started getting interested in eastern orthodoxy. And you can’t be around eastern orthodoxy without coming across some icons because icons are really crucial to their worship. And so at one point I thought that I was called maybe to be a monk. I went to a community of converts in the Greek Orthodox religion and when I was down there as a novitiate I saw that there was an icon that was not complete. And I asked the Bishop for a blessing to complete that icon. I told him that I went to art school and that I was an artist and he gave me a blessing to complete the icon. That was my first icon.

Deterville: Now what year would that have been?

Mark Dukes: This was probably 1987. Because I came back in 1989 and in 1989 a friend of mine introduced me to Archbishop King. I came back from the monastery and I had an egg that I etched out an icon on. It was of the mother of God. It was broken and I showed it to Archbishop King and the Archbishop said, “Hallelujah, you finally have arrived!” (Laughs) “I believe that you have been sent here to do an icon of John Coltrane.” We just had a dialogue from there that ended up with me doing the first icon of John Coltrane. A part of that development was being introduced to John Coltrane because I really didn’t know who John Coltrane was. I really didn’t come from a family that listened to Jazz. Then having a dream lead me to the point were I felt like I could do an icon of Saint John Coltrane.

Deterville: The imagery in the dream, does that show up in some of the icons?

Mark Dukes: Well actually it did. I actually had a dream of him looking exactly like that. [Points to the first Coltrane icon.] It was like in a Star Trek episode where you see a little tiny space ship in a field of stars and then it gets bigger and bigger. Boom! And it said “paint him, paint him like this!” You know and it was just like that. 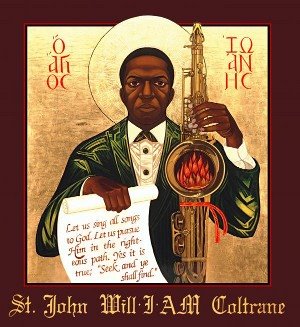 Mark Dukes: That was the first one. That was started in 1989, but we probably finished it ’91. [Speaking to Rev. King] I think that you actually posed with your saxophone…you know, the hand placement and stuff like that and I took photographs of that in 1989. Then I found a place at Saint Gregory’s Episcopal Church because I had a connection with that orthodox Christian monastery. They actually had a monk there who was doing a soup kitchen and I hooked up with him and I was helping him with the soup kitchen. He offered a space in storage where I could do art and that became my studio. That led to my next commission eventually with Saint Gregory’s. I did the Saint John Coltrane pieces in that storage area. And in 1995 I started working on the Saint Gregory’s stuff. I completed all of these [the pieces in the Coltrane Church] within that period of time. Like ’92 to 95.

Deterville: So all of the work that we’re seeing in the Coltrane church was created during that period of time. Where was the studio located?

Mark Dukes: It was at the bottom of Potrero Hill across from Anchor Steam Brewery at the corner of De Haro and Maripossa.

End of Part I