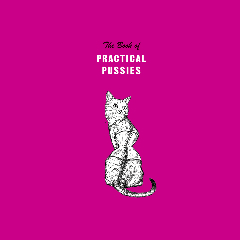 The Book of Practical Pussies

Michelle Rollman’s cat illustrations are totally perverted. They morph between human female and feline female in ways that are truly disturbing, like they are both realistically cute the way cats actually are, not cartoonish, and then sexy the way a femmed-out lady can be, and the chimera is truly grotesque. But cute! And then you feel sort of sickened by the way in which it’s cute, because it’s like the sexy lady part is somehow molesting the cat, even though they are in fact the same thing. Something is being defiled by this Frankenstein’s existence, I don’t know what, maybe me, the viewer. Rollman’s drawings have been compiled into this book, The Book of Practical Pussies, the cover a pink so hot it blisters and then there’s that cat on the front, all wrapped in a corset. The cat looks back, doesn’t make eye contact, but eye contact is aggressive for cats. It doesn’t look ashamed, or come-hither, it’s just a cat in a corset. Don’t you feel weird looking at it? Try gazing at this other one, a drawing of a cat you know just cleaning itself as cats do, its leg flung behind its head but its leg, just that one, is actually a woman’s leg in hose and heels. A human woman, not a cat woman. It’s so creepy and excellent, and the accompanying text is excellent, pieces by Bay Area literary stalwarts like Camille Roy, Jocelyn Saidenberg, Kevin Killian and others. The book was published by Krupskaya, a local poetry press run by Saidenberg and Killian, a great press that puts out good-looking volumes of experimental work. 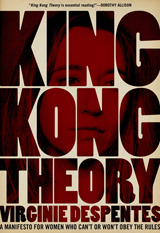 Here’s a story. Once I got an email asking if traveling French filmmakers doing a documentary about feminist sex workers could come over my house and interview me. I was sick when I got the email, and traveling and overwhelmed and cranky but I said yes anyway and later the French people came to my house and asked me some questions and one of them, a quiet, long-haired woman with introspective eyes told me she’d made another movie and she’d send it to me. And she did, and the movie was the infamous sex-worker shoot-em-up Baise Moi, and the woman who had been in my kitchen had been freaking Virginie Despentes, the radical French feminist who had penned the rape revenge novel Baise Moi and then went on to shoot the film version, casting porn actresses in the lead. I just about died to know I’d had this hero in my kitchen and had been too whatever was wrong with me to get it. Later I was in a performance with Despentes in Spain, watching a video she shot that was overlaid with text from her new book, King Kong Theory. It was in French, a language I do not speak, and so it was with real joy that I opened a package from The Feminist Press this week containing a copy of the English translation of King Kong Theory, subtitled A Manifesto for Women Who Can’t or Won’t Obey the Rules. It opens suchly: I am writing as an ugly one for the ugly ones: the old hags, the dykes, the frigid, the unfucked, the unfuckable, the neurotics, the psychos, for all those girls that don’t get a look in the universal market of the consumable chick. It goes on an on, a litany of all the people you’d most like to invite to your party, including those who have big bellies, those who would rather be men, brutish, noisy women who destroy everything that gets in their way, those whose shyness is due to their hangups, those who dream of plastic surgery, those who like to get drunk in bars and collapse on the floor. The men she is writing for include those who cry easily, those who aren’t ambitious, men who don’t want to be counted on, ad infinitum. It’s like a new, French Valerie Solanas, thank you Feminist Press for bringing Despentes to America and will you please now translate Baise Moi, please?

OH! PS just heard from the folks at Feminist Press that Baise Moi was put out on Grove like a decade ago, translated by BRUCE BENDERSON! Yes! I am heading over to Modern Times to place my order.