The Billboard for the Film Invictus 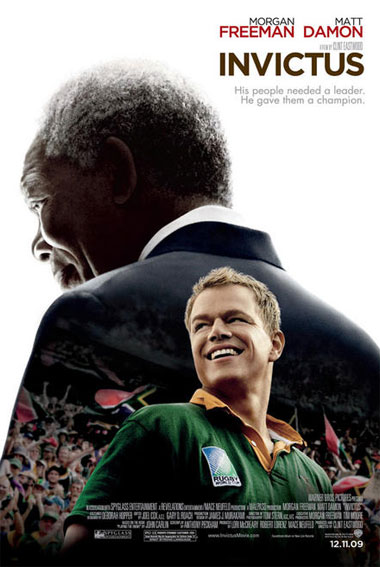 I have an ongoing interest in the play of images that precede the release of a movie and how those images create expectation and anticipation for the narrative told in the film. Anyway, I was in East Oakland recently and saw one of the many billboards for this film. There is something deeply disturbing and unnerving about Mandela’s image as portrayed by Morgan Freeman in these billboards and movie posters. The image of Mandela is looming yet his back is turned and he is in shadow. He is ultimately reduced to a backdrop for the white athlete portrayed by Matt Damon standing in light and central to the composition of the billboard image. The encoding in this imagery places the white rugby player in a more central significant position than the legendary historical figure of Mandela. The words on the billboard read, “His people needed a leader. He gave them a champion.” Implied in these words is the tacit assumption that Nelson Mandela was not sufficient enough a leader for “his people” at the time of his release from prison. One would think that this is a preposterous notion in light of Mandela’s historic achievements, but the viewer of this billboard is expected to suspend disbelief and imagine that he “needed” the help of the white athlete depicted in the image.

The trailer for the film is equally as absurd. Interspersed with clips from the film flash the words “To Unite his country…he asked one man…to do the impossible.” Are we to believe that a Rugby game was that significant an episode in the struggle for Black self-determination in South Africa? Perhaps there is more nuance in the film, but the images in the trailer and the billboards re-run the tired white protagonist as savior narrative to the point of ridiculousness.

Sunday I went to Coffee with a Beat, one of my favorite cafés in Oakland and there on one of the tables was the latest Parade Magazine from the San Francisco Chronicle’s Sunday Paper. The front cover shows Morgan Freeman, Clint Eastwood and Matt Damon. An interesting note is that Eastwood went to high school in Oakland in the late 1940s. The article further revealed that, “Eastwood doesn’t let any of the characters in the movie lecture about racism.” WHAT?!!! For me this confirms that Eastwood may again create the type of sanitized stories that vainly place minor white protagonists at the center of Black historical narratives.  The poster for Invictus seems to illustrate how distorted the view of a historical event can become when disempowered people don’t have control of the images that tell the story. A clue to how Black South Africans viewed the Rugby World Cup can be found in the comments of South African Policy Analyst Aubrey Matshiqi. He Said that “…the euphoria of the world cup overshadowed the inequities in South Africa.” With historical figures such as Winnie Mandela, Steve Biko, Walter Sisulu, Oliver Tambo and Robert Sobukwe I ask do we (meaning everybody) really need a white athletic protagonist to highlight or understand one of the most significant liberation struggles of the 20th century? Why was John Carlin’s book chosen as the first major internationally released film on the anti-Apartheid struggle to be made in South Africa?