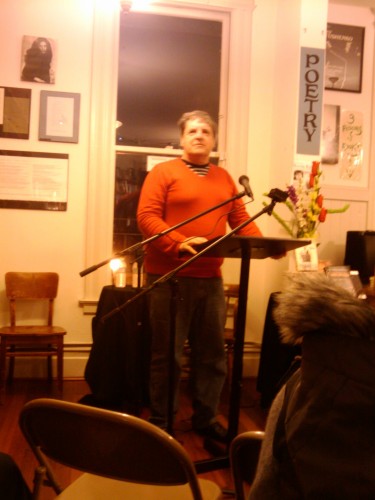 Kevin Killian performs his dark side at City Lights

Man I am so jacked up on the biggest Shirley Temple in a dirty glass from Vesuvio, extra formaldehyde from the maraschino cherry, please. I went there for a mocktail after hearing Kevin Killian read from his latest book, Impossible Princess, at City Lights. Kevin Killian is so freaking funny, and his work is so brazenly vulnerable in that it’s vulnerable to be so weird and risky and also risque, and he just plunges into the hilarious muck of it with pretty much the best vibes I’ve ever felt off a writer giving a reading. Some literary organization has to create a Best Vibe award and give it to Kevin Killian. Having City Lights call him and ask him to do a book with them felt like some sort of award to Kevin, and to have the editor specifically solicit his weirdest works must have felt like he won some experimental writer lotto. I mean, everyone I know is always afraid their work is too weird for a publisher, you know? Or is that just me?

Kevin read the story Rochester, a collabortion with the zinester Tony Leuzzi featuring a sort of alternative universe Kevin Killian — hideous, lecherous, sewing aprons from rags and mashing apples to grisly pulp while a chimpanzee bangs out stories he edits and passes off as his own. The chimp is also sort of psychic. Tony is a shallow Castro queen who hardly even cares about Kevin Killian, who is set up in the piece as a literary legend but sort of lumbers and lurches about, poking the boy’s behind with a screwdriver. Kevin read his dialogue in this labored monster voice, with amazing timing, very theatrical. Kevin Killian is a consistent delight to hear read, he is just so smart and witty and strange, the best combo, right? And you probably all already know about him cause he used to blog right here but if you don’t, go back and read his old posts. 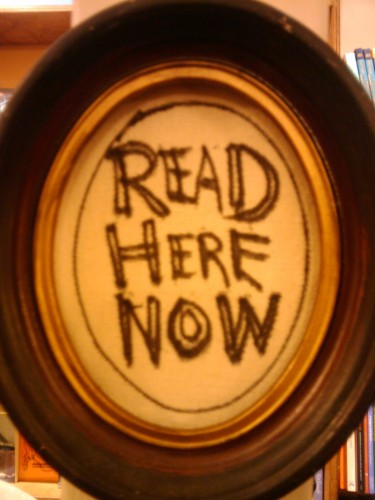 I felt extra appreciative of City Lights tonight and its not just because their events coordinator Peter Marvalis sports such great classic Ginsberg style and knew to declare Kevin Killian not part of the literary scene but the actual literary scene. And not just because they laid out the local focaccia bread and pear cider and what not. It always feels magical to enter City Lights, not just tonight when I entered and walked smack into comedian Marga Gomez who was hanging posters for her New Year’s Eve show. The place always feels like a temple and a museum, like a scared art piece being offered to we the readers. But tonight I was thinking about Bailey Coy books, a great bookstore in Capital Hill in Seattle, and how it is closing. My agent emailed me today that it is shutting its doors. Yesterday I had coffee with Ramsey from the new, radical publisher PM Press, who talked about the looming doom of e-books and the Kindle and you know the whole video killed the radio star song. And I protested, “But Ramsey, tech gadgets are cold and unloveable. They are not beautiful, like this,” and I shook the book I was reading, Here They Come by Yannick Murphy, a fucking terrific book that McSweeney’s packaged in a gorgeous blue-hued cover with cool art that feels lovely to touch. I’m not going to get such pleasure out of cuddling a battery-charged glowing thing, no matter how much I love to curl up with a good long text message, and I do, text messaging is one of my favorite things ever, I almost get hit by cars mutiple times a day for my love of texting, but a text is not a book. But Ramsey called me out on being old, which  guess I am in that I did not grow up reading text on computers like people in their twenties, and that, even worse, teenagers are currently totally comfortable with ingesting large chunks of writing on tiny little gadgets they hold in their hands. All they’re waiting for, Ramsey said, is the book industry equivalent of the iPod and then we’re all screwed. The They in this story are the big publishers and makers of technological gadgets, and the We’re All are the small writers who are never going to be promoted on corporate web sites, and the small publishers who publish the small writers. Awwww, man! I just stopped being a technophobe like, two months ago, and now here’s this crappy distopic literary scenario to contend with. 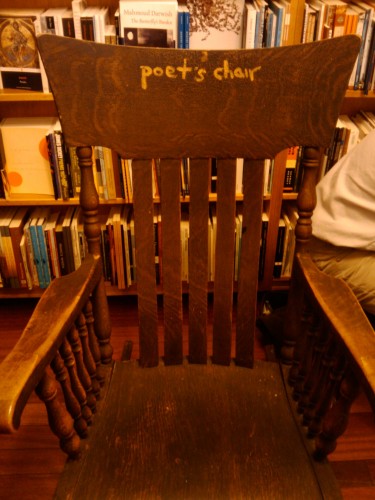 Until everything falls apart and hopefully for long after, we will have City Lights, which has such a great poetry room, and that awesome zine alcove, and the basement where even more books are stuffed, and really every time I use the bathroom that’s off the poetry room I think about how Allen Ginsberg probably took a dump there – I’m sorry, I can’t help it, it’s what I think and probably the poet wouldn’t care to be so recalled as he seemed very comfortable with all of the body’s mechanics and probably even went so far as to deem them holy. Did Allen sit in the poet’s chair? Maybe Diane di Prima has, I love her photo, black and white, hung in the upper left corner of the room, so young with her thick dense storm cloud of hair all around her. I bought a copy of Kevin’s new book, as well as his last poetry collection, Action Kylie, which I hadn’t gotten yet. The title Kylie is Kylie Minogue and isn’t Impossible Princess maybe a Kylie Minogue song, too? And, in Rochester Kevin Killian and Tony Leuzzi meet in a Kylie Minogue online chat room. That’s another thing I love about Kevin Killian, how much he loves pop culture and how seemlessly he shuffles it into the teeming bank of everything that is his mind and work. He really loves Kylie Minogue more than anyone I ever met, and I want to mention that he turned me on to the work of Raymond Pettibon, whose work I’d known from the cover of Sonic Youth’s Goo, but I hadn’t known who did it, or that he’d done anything more, and now he’s so much one of my favorites that I almost bought the limited-edition beach towel Target did of one of his pieces, but $50 is a lot for a towel and it was one of his surfer pieces which is appropriate but I don’t like his sports pieces as much as the ones about sex or Hollywood or religion or alcohol. 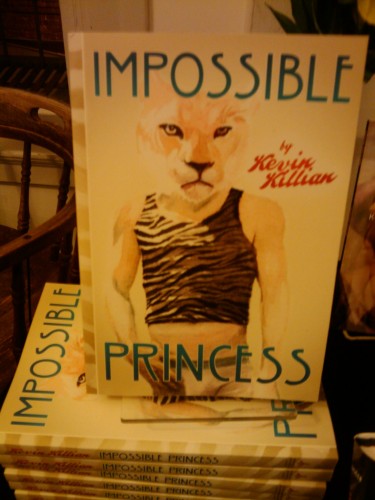 Anyway, I bought those two books by Kevin, and I bought Charles Burns’ Black Hole because I’ve wanted it for a long time and thought what am I waiting for? Ali bought Jack Spicer’s collected poetry that Kevin Killian edited and which has the wonderful title My Vocabulary Did This To Me. Jerry Lee bought Eileen Myles’ novel Cool For You. I did not buy the Poems From the Women’s Movement anthology Honor Moore edited even though I was beyond excited to find a poetry collection that threw Eileen Myles, June Jordan, Erica Jong, Sylvia Plath, Rae Armantrout, Anne Sexton, Judy Grahn and a bunch of others into the same book. Is it not the best idea for a poetry collection? Does it not have the best cover of these young and beautiful and long-haired women from another era marching in the street together? I totally am going to go back and get it. What I was thinking, as we were all buying our books, is that it’s like an act of resistance to buy a book. It’s a crucial act of support and it is an act of resistance and as times get weirder and more electronic it will become increasingly more radical, and more important for people who truly do love the medium to act on that love and you know buy books, because if we don’t then really the books might go away, just like fairies if you stop believing in them. 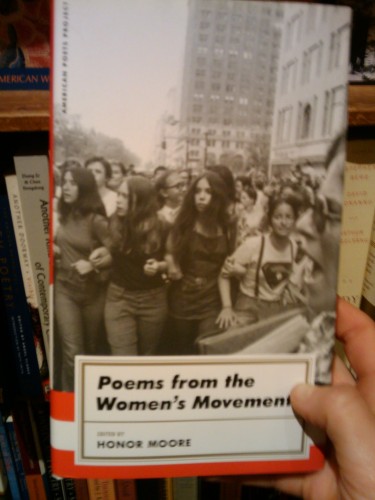