Notes From The Chemical Outpost Vol. 2 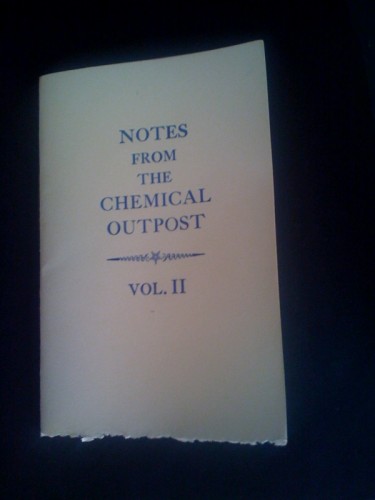 Will Yackulic’s books have always seemed to me a well-deserved respite from his exacting geometric typewriter works. Even before his art involved pulling paper through a wide carriage Remington, the books were a break from painting thousands of white and turquoise cubes. These earlier landscapes resembled the stark terrain of Superman’s planet Krypton.

Titles of Will’s books include A Serious Earth, Solar Doughnuts, Pac Mastery: Observations and Critical Discourse, Stendec, Death Race VSOP, Space Surveillance Variations and of course Notes From The Chemical Outpost Vol. I. When I searched my cordoned off favorite or “magic” books for Notes From The Chemical Outpost Vol. I and couldn’t find it, I took this disappearance to mean that this writing should be all about Vol. II. Both volumes have simple and striking letterpressed covers; slight occult accents highlight the front and back. The insides are black-and-white Xerox. (The dimensions: 8 1/2 by 11 folded in half)

Vol. II begins with a precautionary note: It is customary to say that the characters in this book bear no resemblance to anyone living or dead. That would certainly be a lie, but working out just who is who is bound to be difficult. On one of the first pages, a childhood portrait of Arthur Rimbaud has been placed in the circle where ordinarily one of Yackulic’s outposts would impose itself upon the viewer. Rimbaud starred in several early works of Will Yackulic’s (circa-2001, in a show at The Luggage Store), and if you are at all familiar with his work it is easy to enjoy this book as a retrospective of his various past motifs (cubes, poems, French, Crowley, etc.). 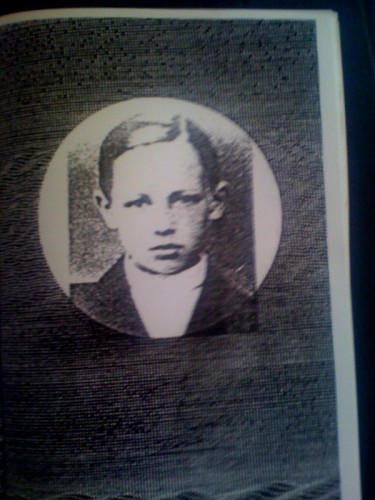 The next page boasts a single phrase, “Breaking The Academic Lock Step.” This is a call to action, and maybe just a reaffirmation. Over the years, using fragments such these, Will constantly let me know just what I have been up to with my own work. Most of his aphorisms — sometimes typed directly onto the canvas — seem to encourage staying out of one’s own way. The drawing to the right of these words is a gathering of lines moving crookedly across the page in the outline of a ladies’ skirt and two slippers; the top is spurting drops of blood (or maybe oil) upward. The shifty handling of the line reminds me of something I read in Jean Cocteau’s The Laic Mystery.

One of the book’s middle sections is just one sentence: ‘What saves Miro — his line is alive, if he makes a cross, it crucifies.” The blinding purity of Yackulic’s odds and ends is indebted (in part) to his constantly embracing elements of chance, then quick patchwork and tailoring once they’re all checked in. I almost want to cut the thread that holds this book together to see the 4 full pages unfolded and discover exactly who is secretly lying with whom. A second later portrait of Rimbaud actually resides alongside the poem “Strange to see where,” and the lunar chart for 2009 is next to the “The Broad Scope of Psychoanalysis,” with the words Please, not more “spaceships” in boyish scrawl underneath. 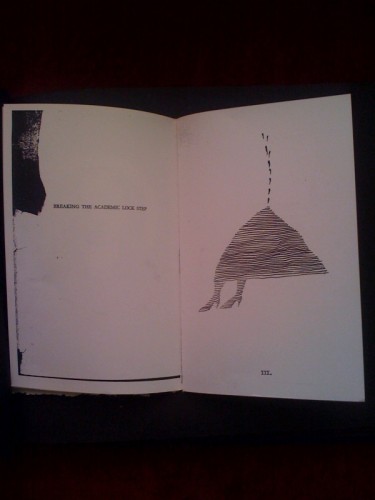 “Stendec II” is the main text in Notes From the Chemical Outpost Vol. II. The original “Stendec” was a very short text (3 small stapled pages) from 2003; its loose but endlessly joining line was a considerable influence on my own writing. The sources of great events are like those of rivers, in vain do we explore the earth’s surface, we can never find them. I cannot say there was any concrete proof of conspiracy with the outer world. I took those lines as an opening for my own poem entitled “The Secret Ceremony.” I wanted something definitive, almost frightening in its message, but with pure pleasure unleashed by the sounding of the words.

Stendec II” takes the tone of having infinitely concrete proof. These are findings one could imagine being presented on a panel at some obscure international conference. Yackulic gives a clue to his sources by barely crossing out “The Broad Scope of Psycho-Analysis: Speculations on Ether, The Vortex Theory Of Atoms & Nicholas Tesla.” It reads like a physics manual with a touch of Beckett, a tone that is so grave its comical. Yet Yackulic possesses such a fine ear the words also seem to be uncovering some truth:

The mineral is largely dependent on the will of others & has little free will of its own. Crystals were the single most powerful objects in use during the period of Atlantis. Seriously. They were the principal source of energy and there powers were unsurpassed in healing. But, as with all tools of man, these powers were also subject to misuse & it was the misuse of the very powers (crystals) that caused the downfall of the Atlantean civilization. The sort of temptations which often lead us further from reality. [Are they running out of the real thing on the other side?] 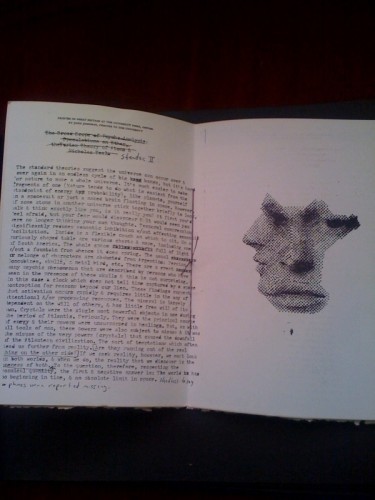 A few pages on is a simple-looking diagram entitled Crystal Energies. Above and below are drawings of crystals cut into slices, with the words “Crystal structure, then, is nothing more than vibration,” and “2169 vibrations per second.” Are the outposts in Yackulic’s larger works a reformation of these crystals and their inherent outward vibration? Notes From The Chemical Outpost Vol. II allows full access to the core of his vision, and shares several comically mislaid notes and addendums, my favorite being a clumsy Persian pipe smoking of its own accord.

Near the end, there is a torn piece of an interview with Gerald de Campo, Founder and Patriarch of the Thelemic Gnostic Church of Alexandria. He says, In my opinion Liber AL seems to address a BIGGER problem than death. It addresses the timeless problem of living. We should all hurry up and get self-knowledge so that we can get on with the joy of existence. The dying part will take care of itself.

Notes From The Chemical Outpost was printed in a signed and numbered edition of 55. Will Yackulic is represented by The Gregory Lind Gallery in San Francisco and Jeff Bailey Gallery in New York.