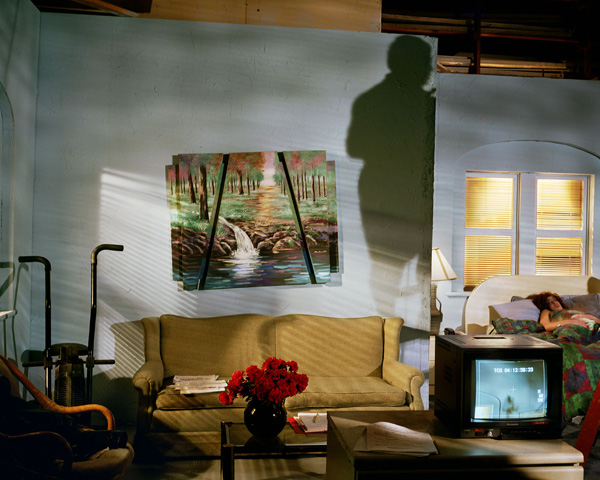 On Sunday, December 13, photographer Larry Sultan passed away at home, surrounded by his beloved family. For several months he had been fighting a rare and virulent cancer, one that would not respond to treatment. In a series of humorous, thoughtful, and heart-breaking emails, he kept us abreast of his condition until he finally said good-bye. 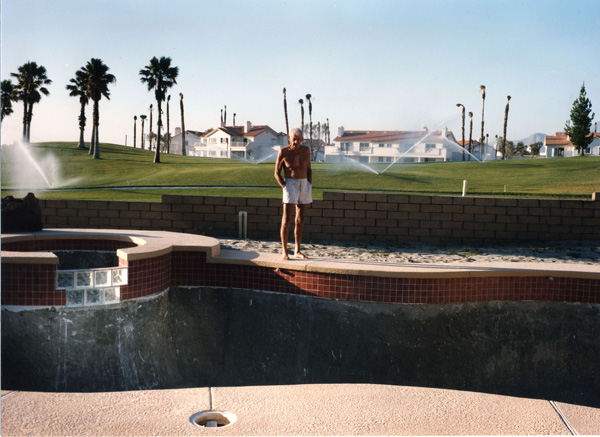 The domestic theater was also the subject of his earlier and more personal project, Pictures from Home. Juxtaposing old family snapshots and home movies, interviews, and his own portraits of his aging parents, Pictures from Home examined the precarious construction of a familial mythology. In these pictures, Sultan’s parents, posed in their carefully decorated living room amid their middle-class trophies or by the backyard swimming pool, look not so much triumphant as lost.

One picture in particular from this series has always moved me. In Empty Pool (1991, above) Larry’s shirtless father stands alongside an empty swimming pool. Behind him, a cluster of identical condominiums grace a rolling golf course. The lawn is a luxuriant emerald green thanks to the sprinklers hard at work on this hot day, though many of the transplanted palm trees are oddly stunted, failing to thrive. The aging man stands at the center of the frame, close to the edge of the pool. His body, though fit, is slight, and he is dwarfed by the yawning concrete chasm of the pool. He looks down, into the pool, with a contemplative but inscrutable expression. Though we know from the title that it is a new pool, soon to be filled with sparkling chlorinated water, its stark void recalls nothing so much as a grave. A vast psychological divide opens within the frame, between subject and photographer, between father and son, and now, I see, between life and death. 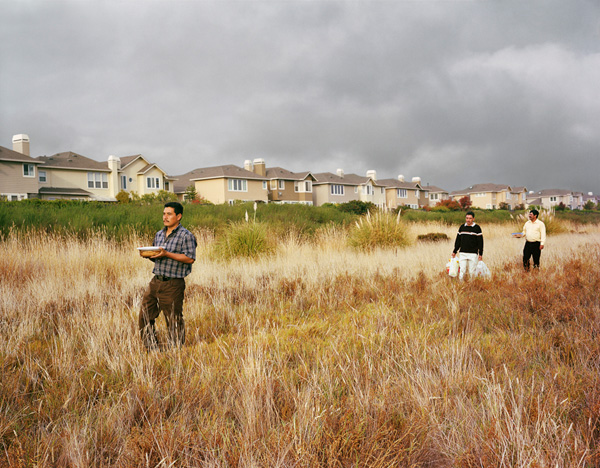 A month or so ago, Larry came in to show my colleagues and me his most recent body of work. He was thin and pale, and it was clear to all of us that he had begun on a journey from which there would be no turning back. The pictures showed Mexican day laborers whom Larry had hired in order to photograph in and around suburban towns in California, many not far from his own Marin home. Larry directed the men’s actions, posing them in activities—carrying food through a field, rowing a boat on a placid canal, resting under an exuberantly blossoming tree— that are at once mundane and mysterious. Larry understood that these men, all illegal aliens, were in a kind of limbo, or exile, and he sought to portray their extraordinarily complicated relationship to the place where they lived and the places they called home. But as always, the work was also still about Larry. As we looked at the pictures, he talked about what California meant to him, the San Fernando Valley of his childhood, and the Bay Area where he had made his own home and family as an adult. Set in overgrown fields and bucolic hillsides, under skies shot through with rose and gold or shrouded with fog, the pictures clearly evoked a homecoming of an entirely different sort. I suspect I was not the only one in the group who closed her office door after this meeting and wept.

If I talk at length about Larry’s pictures, it is because to talk about his pictures is to talk about the man himself: insightful and critical, humane and tender. His are unsparing, clear-eyed, compassionate, flirtatious, anxious, complicated, and poignant pictures, infused with a sense of humor that ranges from wry to dirty. Most of all they are generous, even vulnerable, in their honesty. 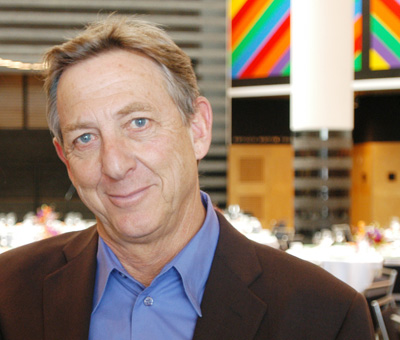 From time to time Larry would ask me to fill in for him at his classes at CCA, and I had the opportunity to see the impact he had on his students. A beloved teacher, Larry had high expectations for his students, but he gave far more than he demanded. His generosity extended beyond the classroom and museum walls to his larger community. He was intent on widening the audience for whom art is intended, and on provoking dialogues about the role art plays in public life. Though he was best known for his photography, over the course of his career he executed a number of important public art projects with his long-time collaborator Mike Mandel, ranging from billboards, to posters produced in collaboration with high school students, to a tiled mural that adorns an Oakland public pool. With his wife Kelly, he also undertook a number of provocative projects, including one called “Have You Seen Me?” designed to give a voice to minority students in his community, a population with little outlet for public expression. For Larry, the ability to make, see, appreciate, understand, and interrogate art was not only a cultural necessity, but also a public right.

Among Larry’s public commissions was a large-scale mosaic mural that he designed with Mike Mandel for the San Francisco airport, where it graces a boarding gate in the international terminal. Entitled Waiting, the picture shows a crowd of people at the airport, anxiously awaiting the arrival of their loved ones. I fly out of that gate frequently and often think how fitting it is at the bittersweet moment of departure to be reminded of the joy of coming home. I will miss you, Larry.