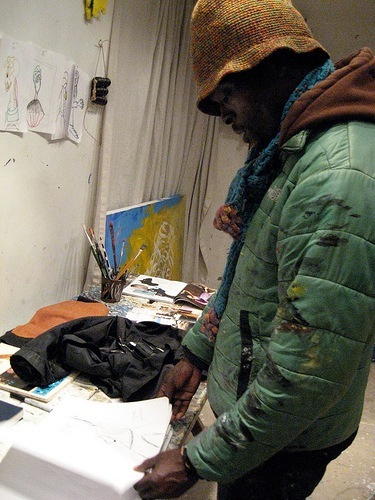 Githinji with one of dozens of sketchbooks in his studio

While visiting Githinji’s studio at 1018 Pine street in West Oakland we talked about a lot of things, mostly about the notion of ritual and process. Like many Black/African artists the ritual process of creating the material art object is foremost in Githinji’s mind. The ritual of making is the “art” and knowing that makes seeing and experiencing the object that is the residue of his ritual even more rich. He describes the process with an earnest look on his face “…that is what we do. It’s like James Brown, you know, to get under it and sweat.” He describes his process as being in a certain rhythm with the energy around him. The energy could be in the visual field, something that he sees, or being in rhythm with an intangible presence. These things happen in a moment. He says “As artists that’s what we are. We surrender to rhythm.” Often times he finds that moment while in public and outside of his studio and that is when he works in sketchbooks. Here are a few examples of the hundreds of drawings that Githinji shared with me in one of my visits to his studio. 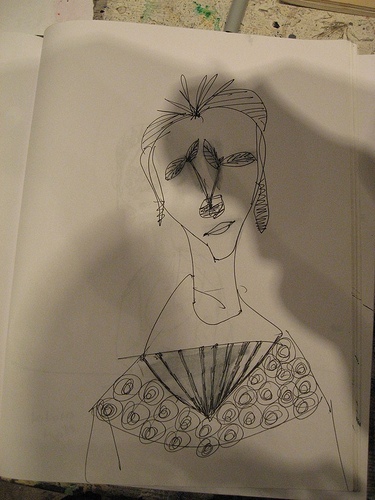 He showed me one of the dozens of sketchbooks that he fills with drawings. The sheer volume of the drawings and a sense of the rapidity with which they were created is an example of Githinji being under the ritual process both in and out of his studio. The drawings represent more of a flash of what the person means to him in a moment than a portrait of any kind; a flash that happens in a non-linear moment as opposed to an increment of time such as minutes or seconds. The moment can’t be measured. He could be talking about himself specifically or the African sensibility towards process in general when he says, “we do something and see it from different dimensions. Spiritual dimensions that aren’t just direct and straight.” The drawings exhibit the lightning awareness present in the art process that Amiri Baraka spoke of in his essay “hunting is not those heads on the wall” in 1965. Baraka highlights how Western concepts of art value the art object often times to the neglect of the creative process and in turn the artist. What he calls “…the substitution of artifact worship for the lightning awareness of the art process.” If the process is made to be the apex of value and that process is housed in the synthesis between the mind, body and spirit of the artist, then her/his ritual of creation is the thing most valued in the society. The object that is so revered in the market would take a backseat to reverence for the maker. 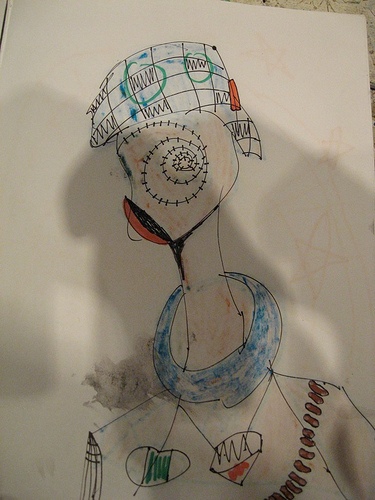 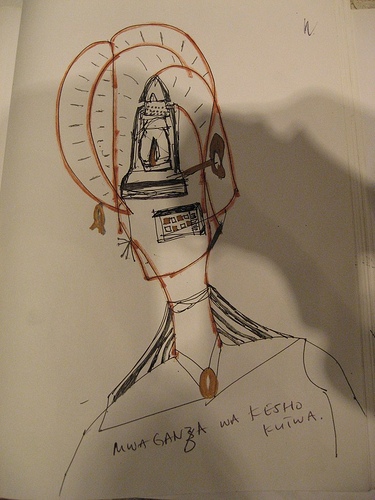 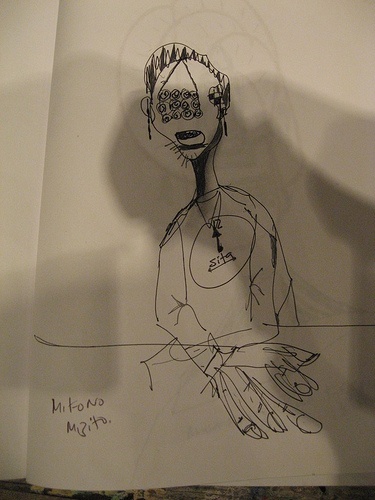 The drawings are of figures that may have writing in Kikuyu (Githinji’s native language) on them. The faces sometimes have objects such as plants or lamps that, to my eyes, function as facial features. He produces these impressions of the people around him in cafes and other public places. The figurative drawings are a distinctly different body of work than the painted Africa pieces that are constructed from all types of found materials. The Africa pieces are his signature work and they will be the focus of the next segment on Githinji Wambire’s studio.