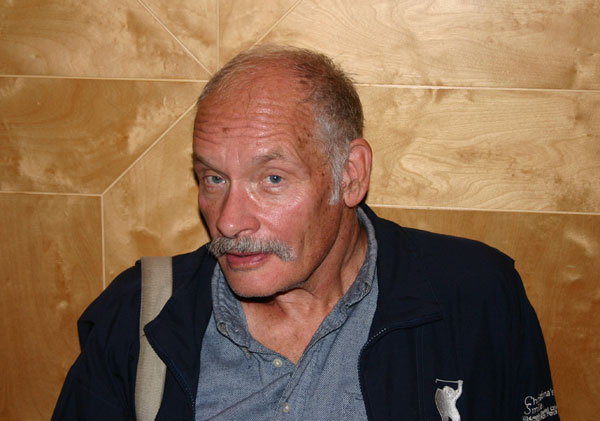 George Kuchar in the SFMOMA Atrium

I got a whole bunch of things because I didn’t like painting the apartment; couldn’t paint the apartment, takes too much time. So, I put up dolls and bought things in thrift stores. I collect statues and also paintings. I got a chance to frame some of my paintings I did in the ’70s — I was trained as a commercial artist. So I hang them on the wall, and then once in a while I hang up the cover of grease stains and stuff. I hang up a colorful thing that you get in the Mission, like a big tiger or elephant on a tapestry. So, I collect that kind of stuff. That and I got a hold of a bunch of books, and I collect videos. I don’t belong to a video store or club; I buy them, sometimes used. I got a big collection of videos, plus my own.

I have two cats. One died. So once in a while, I have an animal.

Usually I don’t eat with artists. I get indigestion. I like artists, they’re fine. I remember I met one artist and I said, “I got friends in the post office,” and he said, “You know someone that works in the post office? Those are real people.” So in other words, they never consider themselves real people, or they’re outsiders, the artists. I eat once in a while with a student or someone. Generally I eat alone because then I can swallow the food, you don’t have to make conversation or you don’t have to worry if the food’s stuck in your teeth. You know, all that kind of cosmetic stuff. Then, of course, if you had respect for a great artist you’d get double indigestion because you had to eat with them and make an impression. No, it would have to be where I don’t know who the hell the person is. Then it’s a surprise, it’s much more enjoyable.

None. Because I can paint myself. I do my own paintings. Of course, stealing, you’re worried about getting caught and it wouldn’t feel right. I was raised a Catholic, and therefore, thou shall not steal. So, I actually wouldn’t steal. If you can make your own, why the hell bother stealing it? And then you can buy reproductions, like Eric Sloane. Eric Sloane was one of my favorite artists. He lived in Connecticut and he painted covered bridges, and you were able to get giant reproductions of his work, framed, at Woolworth’s, when Woolworth’s existed. And you get it for what, under 12 bucks, so it’s enough art for me. I can afford it or I can make it. I wouldn’t steal.

The favorite tool is my hands. Actually, I don’t worry about that. I’m more worried about my legs; I think those have been getting leg injuries. That’s also a favorite tool of mine because I don’t drive a car. I gotta get around, I gotta pick items up, and buy tape. Those, I guess, are my tools.

Now, of course, I work with the computer, editing. I’m happy with the editing on the computer. So that’s a tool. Then I would like pencils and paper, whatever’s handy. I guess it’s my hands would have to be my favorite tool. And the eyes, you gotta watch out for macular degeneration, don’t wanna go blind, and stuff like that.

George Kuchar, and his brother Mike Kuchar, will be presenting recent film preservations this Thursday, December 10. You won’t want to miss Pussy on a Hot Tin Roof, Tootsies in Autumn, A Woman Distressed, and Lovers of Eternity. Or the presence of these two legendary Bay Area film and video artists. Also, George was recently in residence across the street at YBCA, and Tropical Vulture, still on view there, features a preview of Conversations with a Tropical Vulture, scripted by George with the Mexican artist Miguel Calderon, and featuring George as the lead actor and Calderon as director.