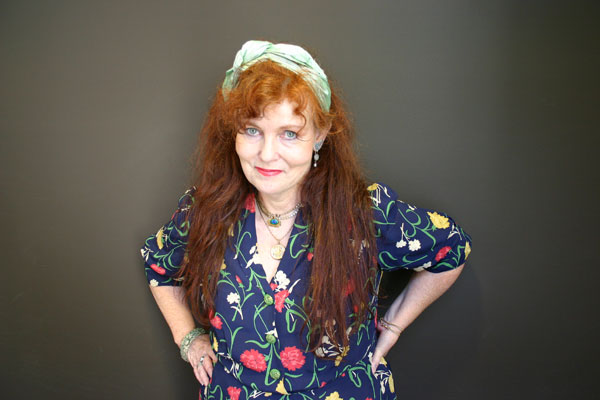 Here’s Fayette in the SFMOMA offices.

Fayette Hauser, Los Angeles, California. Occupation is a dilemma. Right now I would say artist, writer—I’m writing a book, and archiving my photography, contributing to other peoples’ books, so it’s really a lot of history at this moment in time. Hobby is antique textiles, as old as can be, and searching for them. My focus is 18th- and 19th-century French textiles.

I collect everything. I have so many collections of things. If I like one of something then I must have at least 5 or it just doesn’t matter. My favorite things to collect are textiles. I love to collect textiles because I feel they are totally works of art and unique and very abstract and subjective and contain the history of the period in one little piece of fabric. It’s very telling. I also like old photographs, especially portraits, portraits of children.

At one time I was a stylist for food photographers for Bon Appetit and I got into dishes. I brought antique dishes to Bon Appetit; they were being very plain until I showed up. So, now I have a lot of plates, dishes and that kind of thing. And before that I did costume design for films. And I’ve had vintage clothes since the 60s when I was in art school so the collection goes way back to Boston 1964, when we discovered the Goodwill in Boston. It was called the Morgan Memorial and it was 5 floors. Nobody went there, everything was dusty and laying around. They had an antique division which was really incredible then because nobody wanted it, everyone wanted modern.

Samuel Beckett. He’s my favorite playwright, I absolutely love him. I would love to have a conversation with him. That would be the man. Absolutely. Even now, if he could rise from the dead, he would look even better. His portrait in the Avedon show, I mean, he’s just a stunner.

That’s tough. A painting by Bonnard. I would pick a Bonnard painting. One of the really abstracted landscapes, the backyard paintings that look so bizarre. He was my favorite painter when I was in art school, I learned a lot from him.

Oh, my favorite tool. That is a serious toss-up between scissors, a good pen, and an X-acto blade. I think a good pair of scissors would go on the top of the list. I always carry my best scissors with me. Once they got taken away from me, I was devastated. Now I don’t put them in the carry-on, just because of that. A nice, small, sharp, good pair of scissors – can’t do without it. Then there’s always the safety pin and the bobby pin.

More about why Fayette’s here: “We’re having film night on December 3rd. It’s the 40th anniversary celebration for our theater group, the Cockettes, which was born here in San Francisco at the Palace Theater in North Beach on New Year’s Eve 1969/70. We sprung full blown onto the scene and were channeling the energy of the street onto the stage and everyone embraced it from the moment it began. It was a wonderful ride. For three years I never wanted to get off.”