For about a year now I’ve been an avid fan of Sketchup, a freeware 3-D modeling program developed by our peninsula neighbor friends Google. It’s billed as an everyman’s version of CAD, and it has saved my artist butt many a time by allowing me to create quick and lovely 3-D sketches of exhibition spaces and installation proposals. I used it extensively on my last project in London, “COPYSTAND: An Autonomous Manufacturing Zone,” emailing spatial mock-ups of furniture placement and measurements back and forth to the project managers. By the time I had physically arrived in the space for the actual exhibition, it felt like I had already “been there” since I was so intimately familiar with its virtual representation. Strange, really. But totally awesome. 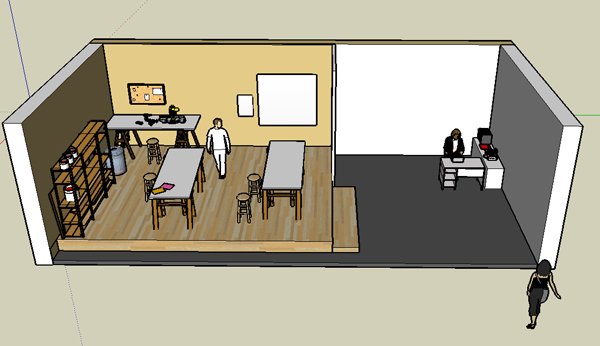 So it came as a surprise to me last night when I downloaded the upgrade to Sketchup 7 and realized they had replaced my favorite default guy, Bryce.

“Who’s Bryce?” you may ask? Why, he’s the default guy, the guy who automatically pops up into an empty space, ready to act as a human scale model to whatever it is you’re building. Bryce wears a T-shirt layered over a long sleeve shirt, sort of casual jeans (not skinny, more generic), and perhaps tennis shoes, it’s a bit hard to say. He’s kind of the guy you’d see anywhere, really — especially in the bowels of Silicon Valley. “Generic white guy,” if you get my drift. I bet you he even has a messenger bag hiding somewhere. 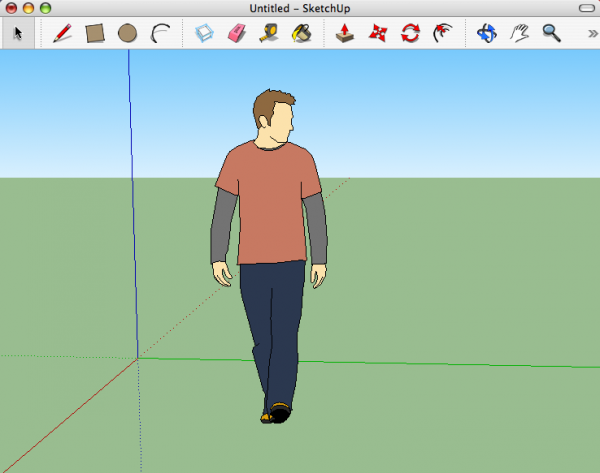 Below are screenshots of the various ways he’s been treated by users: 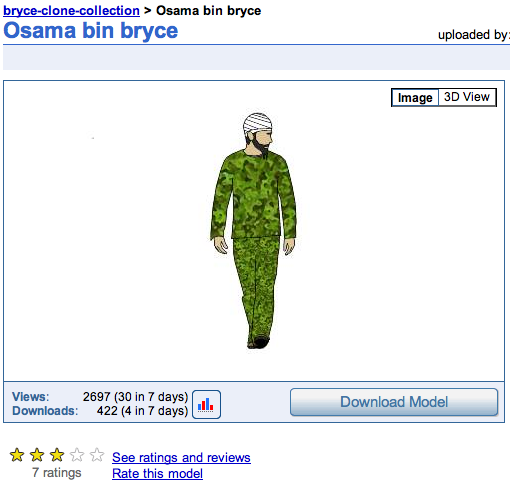 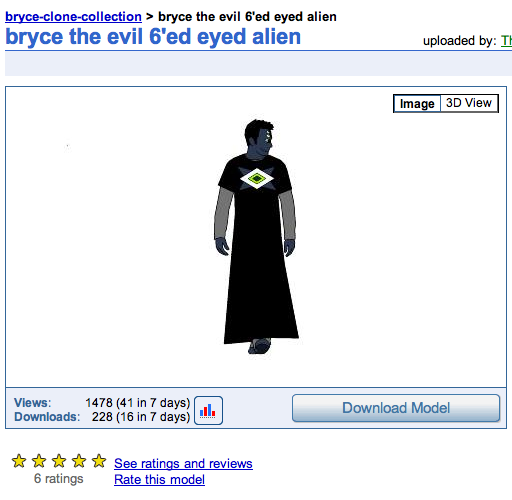 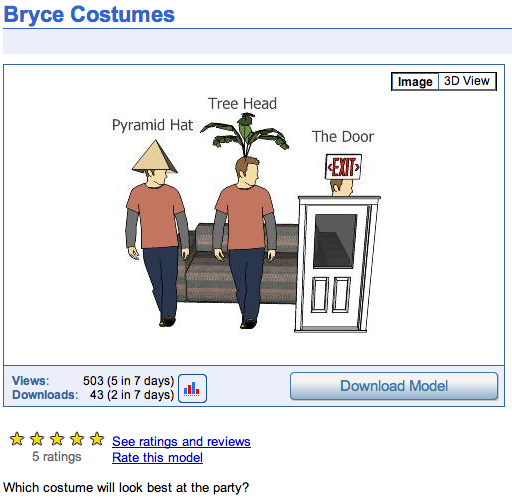 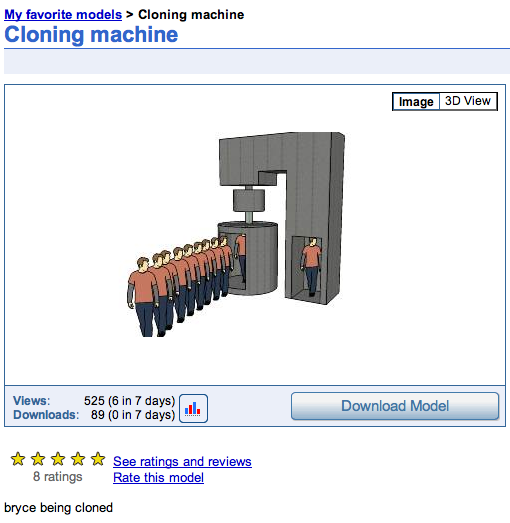 But Bryce is a thing of the past. Hell-o “Sang” — a guy who wears a white button down shirt, casually untucked, and has the disheveled haircut of a hipster. But I was dismayed — where was my favorite default guy and what had they done to him? Had I really become so used to generic Bryce that even an updated, ethnic version (Sang is Asian American, it seems), was still unsettling, despite my own support of diversity in the workplace? 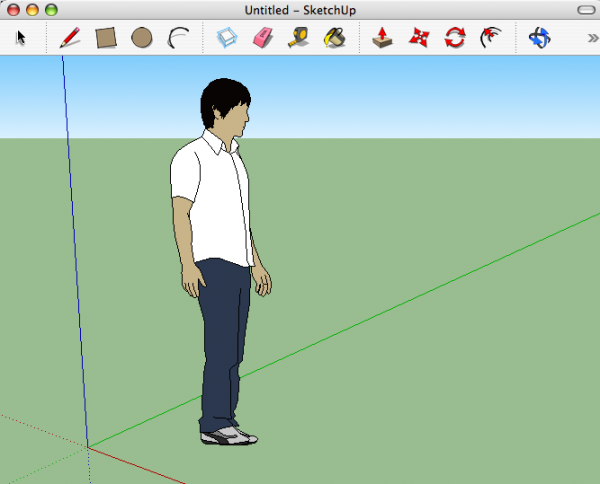 Upon further internet research I found out that both Bryce and Sang are based on actual people who are Google Sketchup developers. Bryce is actually Sang’s manager. Sang seems really cool, or at least in real life, as evidenced by his sense of humor on the INV/ALT Design Blog.

Maybe it is time to retire Bryce. Silicon Valley was really never as generic as he was, as evidenced by its large Asian American community involved in daily life,  business, and yes, software development. Only time will tell how the global Sketchup public responds to Sang. Will they abuse him as much as they’ve abused Bryce? Is the generic white guy whipping boy a thing of the past?

The cool thing about having a default guy in Sketchup is that he’s just automatically there. He’s deletable of course, but most people leave him in and incorporate him in some way. He populates everyone’s virtual worlds almost like a friendly virus, colonizing these vectored spaces and attempting to give it a humanity. The same will happen to Sang and he will populate a new Sketchup world from here on out.

Besides, perhaps it’s time Sketchup acknowledged there are more Sangs in the world than Bryces. According to wikipedia, Asians make up 60% of the world population. So then I welcome Sang and leave behind Bryce. Fare thee well, Bryce. Enjoy retirement, you’ve had a tough life! 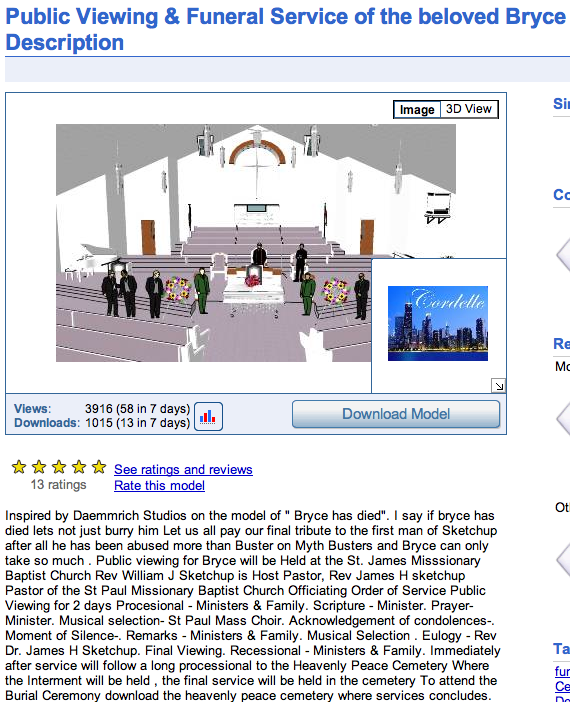 A complex funeral service for Bryce designed by a Sketchup user