Our monthly feature, Collection Rotation: some wonderful guest organizes a mini-exhibition from our collection works online. This month’s guest-curator is the totally marvelous San Francisco artist and filmmaker ANNE MCGUIRE. You can see some of her work in JIGSAMENTALLAMA, on through 12/19, at David Cunningham Projects. Thanks Anne!
____________________________________

All these coincidences are driving me crazy.

It starts with my grandmother, born in 1905: 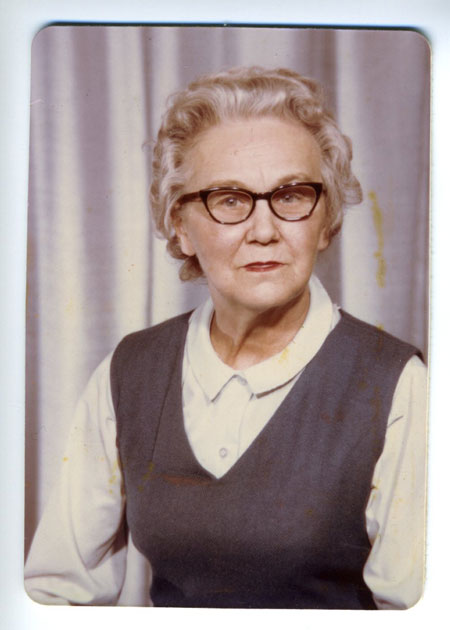 The photographer Roger M. Parry was also born in 1905. That makes my Grandma and Parry contemporaries.

Parry took this picture called Madeleine, in 1938. It’s of a woman’s bun on the back of her head. Madeleine is also the female protagonist of Hitchcock’s VERTIGO, a movie about a man obsessed with a woman named Madeleine who wears a bun. There’s a great scene in VERTIGO where Johnny and Madeleine visit Mission Dolores, two blocks from where I live. The photo by Parry predates Hitchcock’s movie (and the story it’s based on) by a couple of decades. 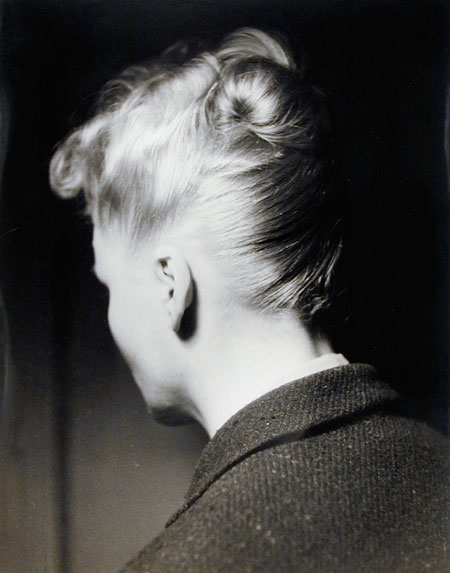 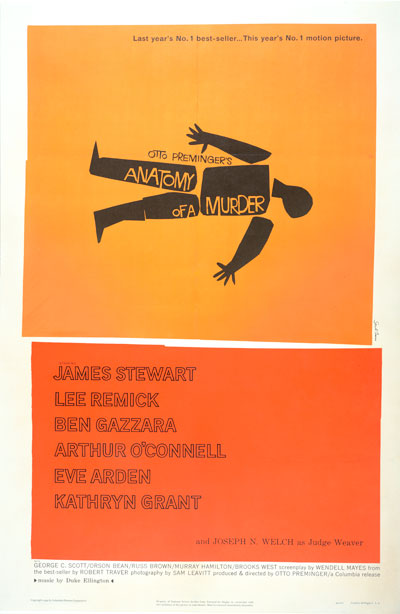 Saul Bass designed many of Hitchcock’s movie posters. He often used just a couple of colors, and reduced his figures to blank cut-out shapes which remind me of those Pompeii figures (as seen in this photo by Georgio Sommers from the 1880s): 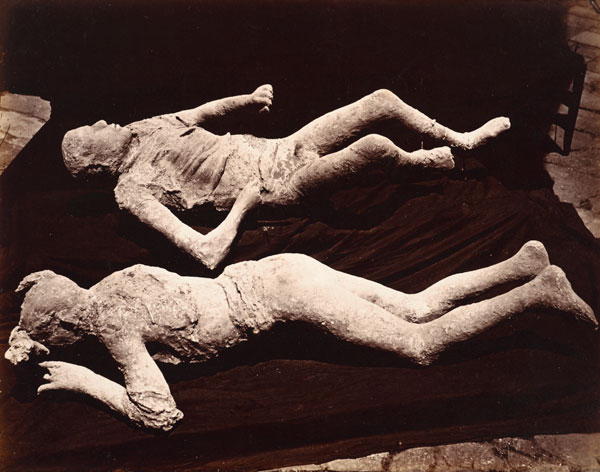 I’ve always been captivated by the story of Pompeii and how in 79 AD it was covered by lava and ash when the volcano Vesuvius erupted, killing thousands as they ate, worked, walked, and lived.

These figures by Manuel Neri were made exactly 1900 years after Vesuvius blew up. At first I thought they were by George Segal: 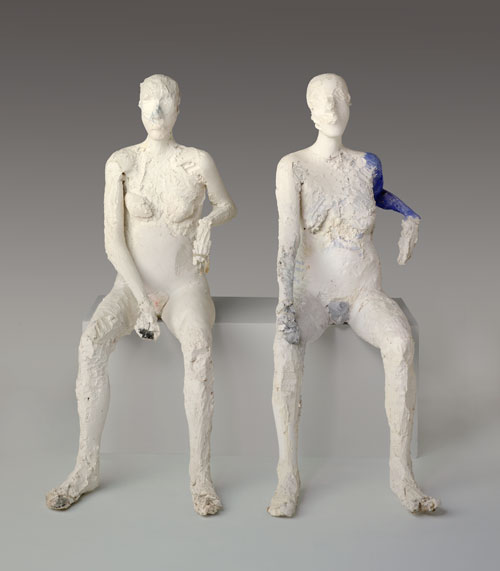 Here is George Segal’s Hot Dog Stand (note ceiling). My guess is that Segal wanted to bring Mondrian to the streets. 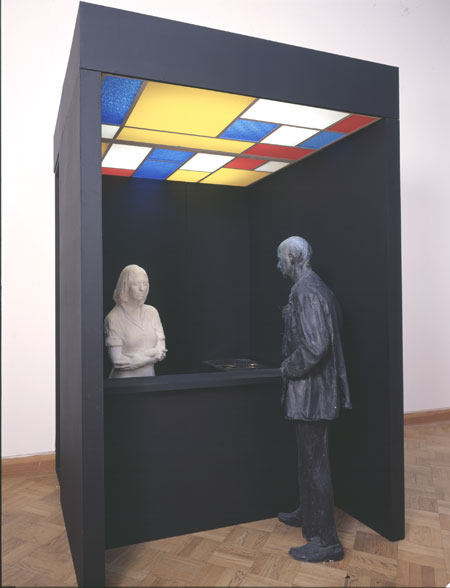 Have you seen George Kuchar’s 1968 film House of the White People? It features Segal at work in his studio in New Jersey (he had converted his chicken coop into a museum of his sculpture).

Lee Friedlander took this photo in 1968. (Baltimore.) I love this lady’s high-hair and shift and the Diner’s Club sticker on the window. Does this place still exist? I visited Baltimore in April for a performance festival called TransModern. There is a wild spirit at work in Baltimore, playful. Lots of youth, working on their looks, stars of their world. 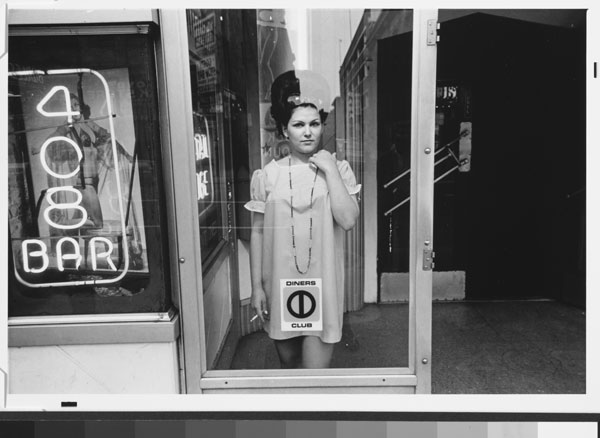 The youths in Rineke Dijkstra’s video The Buzz Club are also note-worthy. The work shows club kids trying to act cool, the way they would in the confines of a dark dance club, but here they stand against a blank wall under bright lights in front of a camera. The camera is alluring, a mirror they cannot see into. 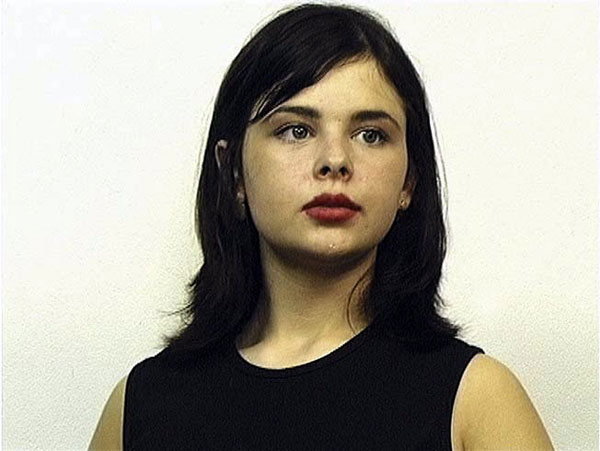 Dan Graham’s wonderful piece is a bit of a fun-house mirror – bring your camera. 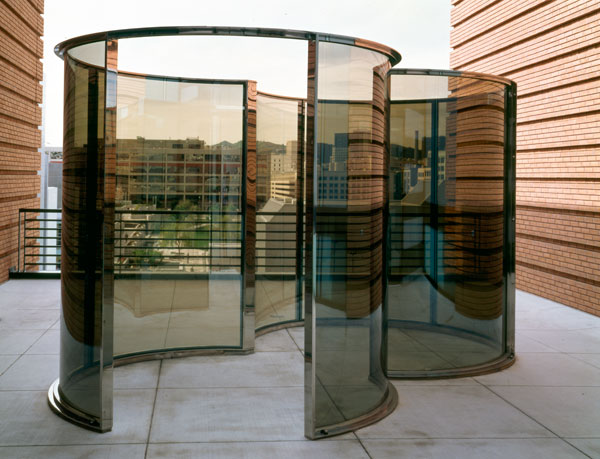 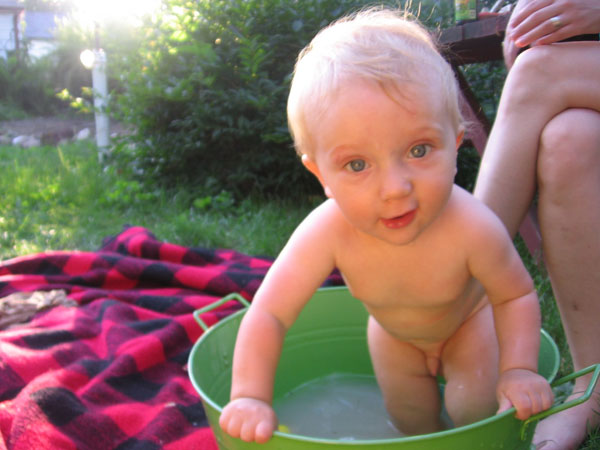 Anne McGuire’s work, both on paper and videotape, plays with conventions of perception. Her film Strain Andromeda, The (1993) re-edits Robert Wise’s The Andromeda Strain (1971) in such a way that it starts with the end, and ends with the beginning. Ditto with her 2006 Adventure Poseidon, The (The Unsinking of My Ship), after Ronald Neame’s The Poseidon Adventure (1972). She has taught at Korea’s Kyung Sung University, the San Francisco Art Institute, UC Santa Cruz, and at Stanford University. Video Databank (Chicago) and LUX Distribution (London) distribute her videos. McGuire’s works on paper are available through [2nd Floor Projects] in San Francisco. She lives in San Francisco, where she also writes poems and performs as a singer.