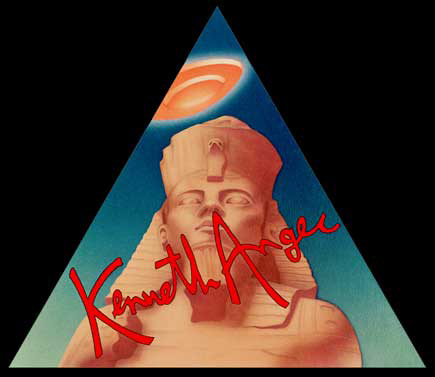 Magic is never settled; the one that should have it has it. The only definitive statement that can be made concerning its nature is that it is creative. Eros is the name of its agency.

Throughout my impassioned love for Kenneth Anger and his Magick Lantern Cycle I have heard of several stray films that over time have disappeared. At times it seems that his lost works outnumber the existing ones. These include adaptations of Lautremont’s Maldoror; The Story of O; a film of Thelema Abbey in Sicily documenting the Crowley murals that Anger spent 3 months uncovering; and perhaps most intriguing, a film of The Gnostic Mass. Sir Paul Getty was to have funded this last project, but his death in 2003 left it and others in limbo.

As to why these films have yet to surface, Anger is always quite telling: Strips of film were sent away, then destroyed by their developers for indecency; reels were stolen from trunks of cars; there were private films struck once for foreign collectors; the money ran out; they lost it, he’s tried to find it, and it’s untraceable, because a freeway to the San Fernando Valley was put through all those lovely 1920s houses. One starlet was removed from his set by her French ruling class family. Only a single still from The Story of O has survived. He can go on & on.

Anger works as I have known quite a few poets to work: He takes bits and pieces of all of these rumored films and threads them as a veil over the dominant imagery. These films do exist, but speaking as if they don’t only triples their potency. They are given as slivers and to track these fragments as they arise would crack the underlying secret architecture. Men and women have been killed for less.

Stars tumble from the dice cup over a fixed horizon. As we get older passages that once seemed random gain wisdom. They illumine our secret fears, then, brighter still, straight burn them into dust. Most arts would welcome the arrival of such revelation joyfully, though the thought of these transformations being brought about by Anger’s work frightens me. “A magical evocation born out of the rigors of choice,” chance.

When one is looking forward to an opening, performance, or screening of film, fantasy tends to run wild as to the imagined depths one might reach on that particular outing. Atlantis! Our arrival does not fall to one grand sweeping gesture, but is beset by small fires and symbols on point within that first flow of recognition, tracing a rise in nobility. We are allowed to see it once, and then it hardens, is set away from us. These are the works that come about casting shadows and years later light upon the door to that innermost chamber, girdled in gold leaf, three pieces turned down queer into the bed, caught in the wind and folded there.

Anger’s works stack up almost as if he had died very young. Lucifer Rising was finally completed in 1981 and the Magick Lantern Cycle appeared to be sealed, as any royal tomb should be. I had heard that when a print of his more recent Mouse Heaven arrived at Canyon Cinema, he’d taped a large handwritten note to its canister that read, “Keep away from Disney spies and all enemies of Kenneth Anger!”

This piece was originally written and performed at Blood Transfusion For a Ghost – P.S.1 Contemporary Art Center 6.20.09