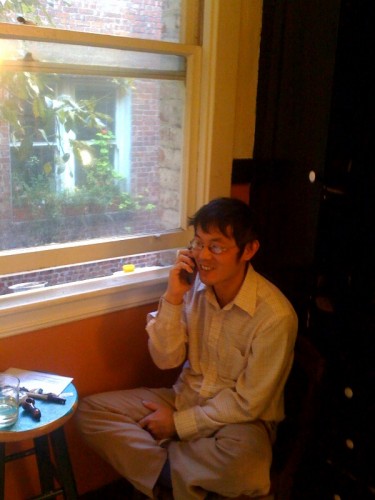 I remember when Tomo was only in one band. It was [Hey] Willpower first, or wait, Window Window, and then Tussle and then Coconut? Maybe his two solo albums came first. I’m not sure that’s right, but I do remember that I was never worried as he was joining up with group after group. He just seemed to snowball into a force that was needed simultaneously by three groups with three distinct sounds. The kind of role I would ordinarily ascribe to a producer or arranger. Not to even mention other pairings that lasted a show or two or were just revived whenever the stars were aligned. He plays guitar for Coconut; bass, keyboards and percussion for Tussle; and keyboard for [Hey] Willpower. I used to read about the old big bands (Fletcher Henderson, Duke Ellington and later Sun Ra) playing upwards of 280 one nighters per year, and I think Tomo would do well with that life, one of his bands dropping him off in Providence and then another picking him up there, trading him out as needed. 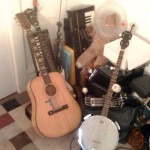 The first time I visited Tomo’s apartment he had a small hand-held recording device. The kind you set on the table between two people during an interview. It was the two of us as well as Nathan Berlinguette. Tomo asked if we wanted to make a sound piece, or maybe he said “a noise piece.” He waited until we were quiet, pressed ‘Record,’ and leaned back hard in his chair. I took a roll of pennies that happened to be at arms’ length and cracked it against the counter. I forget what Nathan did. The playback was very much like a crude Xerox of those few seconds. The recording came back with a rough loud edge I did not expect. We made several more that night, and each one turned out perfectly. It was like collaborating on poetry or an exquisite corpse drawing. It seems more about what the room wants when things are going well. Like when mute television is blending perfectly with music left on in another room.

Tomo used to tell me about his Tussle “homework,” which seemed to entail listening to recorded Tussle practice sessions and isolating the hinges for possible song making. Nathan, who issued Tomo’s first two solo CDs on his Daft Alliance label (2004 and 2006 respectively), says that one of the things he most admires about Tomo is the thrill he gets by playing with people that are “untrained.” Before those sound pieces, I hadn’t involved myself in any musical activity for years, beyond singing around a fire once at Ocean Beach. 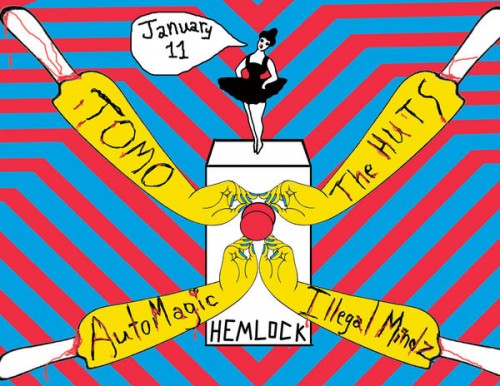 I last saw Coconut play an acoustic set at Marin Headlands as part of David Wilson’s Open Endless event on May 10 of this year. The waves had surfers that day, and the songs were always open enough to include them spontaneously, even by name. The last time I saw Tussle play was at a house party. Tomo has said he feels if a show takes place in a secret or out of the way venue, the audience feels more a part of it and the dividing line disappears. Coconut is his band with the artist Colter Jacobsen. Their first release was a box set, comprised of three CDs: Rain, Cocoanut, and Hello Fruity, complete with a grapefruit map. (Allone Co. 2007) Seeing as how I play no instrument, I wanted to ask one of Tomo’s bandmates just what it is that he brings to music making. Colter writes: 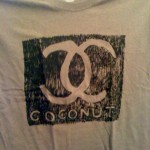 I always wonder where Tomo’s influences come from. The first band he played in was, I think, sort of heavy metal. I could be wrong. But I think they covered Metallica and maybe even the Toy Dolls? He buys albums for their covers. So I think artwork and a band’s aesthetic informs Tomo’s tastes, whether he knows it or not. Tomo probably mostly absorbs his influences from these collections that he has amassed and from seeing live shows. The genres are very wide, ranging from computer music, heavy metal, rock, jazz, blues, funk, dub, electronica, techno, Americana, bluegrass, classical, minimalism. But somehow his guitar style has come to be very Tomo. What is that? A quirky blend of mostly finger-picking, almost Fahey styles, with humorous out-dated genres like bossa nova or surprising breakdowns and changes that suddenly lead into sensitive and sincere ballads. Tomo used to have a system to the way he listened to his own music collection. I’m not sure if he still does this now that he has an iPhone, but basically, he used to rotate his CDs by taking five CDs with him to the coffee shop he worked at. Then he’d take the next five the next day and so on. This way he kept a constant log of his collection in his head. He’d decide to sell a CD (and buy a new one) when he felt he was getting tired of the CD. I assume this leveling of listening, or giving all his music equal play time, makes way for easy and immediate access to the variety that is constantly spinning in his brain-catalogue. Playing music with Tomo is always a learning experience. When I first hear his songs, they sound so strange to my ear, so many starts and stops and changes. After hearing it many many times I finally become familiar with it and wonder why I couldn’t hear it for so long. All its parts make so much sense together. And I realize it could be no other way. To Tomo it’s like talking I think, or like making a poem from a feeling. The most predominant feelings I get from Tomo’s music are feelings of enlightenment, a place where new ideas enter your mind, a feeling of something new coming. But then sometimes the feelings I feel come from a place of resigning to the habits of the everyday, accepting them and life for what they are. Some songs I know come from conflict and trying to understand relationships. This is where we connect mostly in the sensibility of where our songs come from. Mine I think are a little more about yearning and being wronged. Tomo’s are more about the sparkle and glimmerings of love and the possible threat of it only being a fleeting moment. Some of his songs can also inhabit a very lonely, though hopeful place, coming from a late-at-night place (literally) that is dark, though looking closely you can see the tiny firefly-like blue static lights from rubbing socks against your sleeping bag. The heart of his songs I think come from a very specific place, a feeling experienced that he then follows. I feel very similar to that place of feeling with Tomo and I think our ideas often marry well even though they began as two separate parts. Practicing with Tomo is like walking through a park and noticing how beautiful the clouds are, or laughing at a funny-looking dog that is wearing a blue sweater. It’s healing for the mind. We don’t only practice music, we practice walking and talking and looking. When I first met Tomo he didn’t drink water, nor did he drink any alcohol. Now he drinks water and alcohol. Also when I first met him he didn’t dance. Now Tomo dances. But Tomo is still playing music all the time. I think music is what keeps Tomo together.