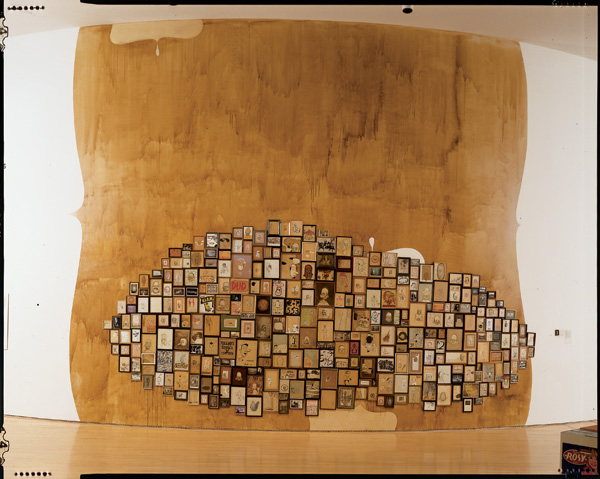 In the first in an occasional series of posts focused on issues of conservation, managing editor of communications Apollonia Morrill talks with director of conservation and collections Jill Sterrett, about an installation by Barry McGee, and the ways the field of  conservation evolves to meet the demands of new artwork.

As a student of art history, I was always fascinated by the field of conservation. I started out studying medieval art; of those who work in with this material, conservators seemed most linked to its inner life and its makers. They get to touch the art, after all. I’ve now worked at SFMOMA almost eight years and am myself an artist, and, with a view behind the scenes, I’m still awed by the work conservators do. Conserving modern and especially contemporary art is a complex affair. The artworks in our collection present challenges that range from the stabilizing traditional materials in a Giacometti sculpture, for instance, to archiving concepts behind a piece like Felix Gonzalez-Torres’s curtain of gold beads that will be installed in The Anniversary Show with only a set of instructions from the artist for guidance.

I recently spoke with SFMOMA Director of Conservation and Collections Jill Sterrett about conservation, focusing on one particular work by local favorite Barry McGee. Well known as a graffiti artist, McGee (aka Twist) makes drawings, paintings, and mixed-media installations inspired by, and drawn from, urban culture and street life. SFMOMA acquired his untitled installation in conjunction with the SECA Award Show in 1996 and has subsequently twice reinstalled the work. It will go on view again this December as part of The Anniversary Show. The piece has presented some unusual challenges, and Sterrett’s approach underscores the creativity and flexibility of the conservation team, which has bent the traditional rules of its trade to make room for the quirks of contemporary art:

Apollonia Morrill: You’ve done extensive conservation work on Barry McGee’s untitled installation piece. Can you talk a bit about it?

Jill Sterrett: This work is comprised of 325 drawings and found photographs in found frames and installed by the artist. In previous installations, before hanging the drawings, he painted the wall, giving each installation a distinct look. The life of this piece raises very interesting questions about the artist’s ongoing involvement. And those are questions that we don’t have completely resolute answers for. Our conservation team here is very engaged with the idea that this installation has an active life. We invite the possibility of iterations, and then document each one, including making one-to-one templates of every installation, to show where each of the 325 drawings was hung for that round.

AM: In the first and second installations, it looks like the frames are hung side by side, while in the third they’re on top of one another.

JS: I think the biggest danger in bringing this piece into the collection would have been imposing some sort of false lockdown on the first installation, as if that was the only way the piece could be shown. That is not what the artist intended. It is more open-ended than that; there is room for versions. The conservation work we are doing gives us an idea and a record of how the artist intends the piece to be in the world.

AM: It seems increasingly common to have works like this, that might be totally transformed every time they’re installed.

JS: Yes, for works like this one, we need to consider the ongoing life of the artwork instead of trying to compel some sort of static order. In art conservation, there’s a notion that we often inherit in our methods: objects are not supposed to change. And in fact, at this museum, for some works, that quality of ongoing change is one of the things that we’ve grown to honor—even more than the physical materials that the works are made of. This allows for the idea that artworks do transform, and they live and they change with each installation. 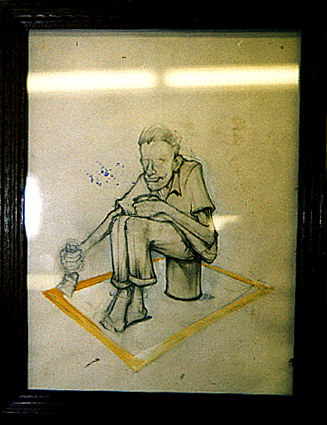 That said, there are also some really interesting material conservation issues around Barry McGee’s drawings. He uses found frames that are sometimes flimsy. If you turn them around to look at the back, you find nothing if not an unorthodox method of framing. You’ve got cardboard, you’ve got masking tape, you’ve got broken picture glass, and you’ve got these dime-store frames. When we acquired this work, the masking tape was failing, and some of the drawings were falling out the frames. They were literally physically at risk. We worked very closely with one of the curators who acquired the work, Janet Bishop, to come up with a solution to reframe these.

We wanted to honor Barry’s methods. While you could describe these works as framed drawings and photographs, they also have the look and feel of objects. When you see this piece installed, rather than just looking at the two-dimensional plane of framed works, you also see an assembly of objects on a painted wall. We didn’t want our treatment of the frames to create a falseness that would be hygienic or too archival—that would be at odds with what Barry is about. So we did things like take the drawings out of the frames and insert an interlayer of good-quality paper as a protective barrier between the drawing and the framing material. It doesn’t change your experience of the drawing.

We also honored his use of masking tape, deciding, in a completely heretical move for the conservation world, to reframe the drawings using masking tape.

AM: Won’t the new masking tape break down too?

JS: Exactly, which means there’s an ongoing relationship we are going to have to these drawings.

AM: How fascinating. And you are even ripping the tape like McGee did.

JS: It’s been a challenge to explain this to our conservation colleagues at other institutions. If you’re of the mindset that you should only use archival materials, you can have an honest debate about whether this is a sound treatment. We’ve heard people ask, “You didn’t replace the acidic cardboard, and you reapplied fresh masking tape?” And we’ve said, “Yes, but we did put an inner layer of good paper in there that you can’t see, and we didn’t change the way that he framed the work.” We’ve stabilized the piece using minimal intervention, and more importantly I hope we’ve preserved the spirit of the piece.

AM: And the works are also right up against the glass, which is extremely unusual in a museum.

JS: Right up against the glass, if that’s the way he did it. There are certain cases where if we could put a little spacer in, we did. But what we’re really doing is including the artist’s framing method as part of his “gesture”, part of what he was doing. So often with artworks the frame is sort of looked at as an accessory. But in this case, the frames are integral to what Barry McGee’s doing. We’ve left broken glass where it exists. And that’s really a testament to his work as well. If he chose broken glass, we decided to go ahead and leave it, unless the glass was causing harm to the drawing. So there are a few instances where there was chipping, and if those shards were damaging the drawing, we replaced it. 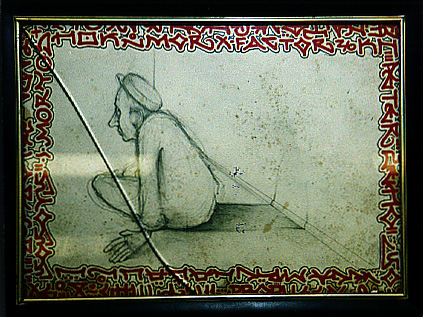 AM: Did you replace it with broken glass?

JS: Sometimes yes and sometimes no. There’s a look and a feel to this piece, which is very much about the street. These are found frames. Without too much intervention, you can really mess with that feeling. We decided to privilege that street quality in the conservation, instead of undertaking a more clinical analysis of all the materials that go into making a work last a long time. It means that we will have an engaged, ongoing relationship to this piece but I think we take that on as one of the commitments of keeping a piece like this one.

AM: Did you work closely with the artist to come up with these solutions?

JS: We’ve worked primarily with Janet to come up with these solutions. As we were considering what our options were for the treatment of these individual works, we sat with her to show her the range of issues. Whether it was the cardboard interleaving, or whether it was a somewhat fumbly frame, or whether it was broken glass—we showed her what the piece would look like if we were to frame it per all the accepted, conventional standards of framing versus our revised approach. And we all agreed that the look and feel of the piece was really much more intact if we were to revise our approach. We compromised on regular standards of framing on behalf of the work. 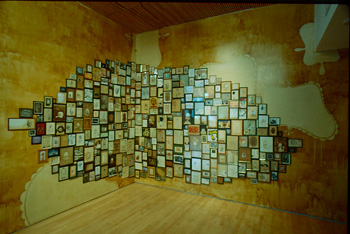 AM: One last thing. Could you define what exactly conservation is?

JS: That’s a good question. I think that conservation is in a bit of transformation these days. A common public perception is that conservators fix broken things. While that’s not untrue, another way to see it is that conservators attend to the life of objects, which has to do with understanding both their physical manifestation and the ideas behind them. You see traditional conservation being slightly redrafted with contemporary art, as in the case of Barry McGee’s work.

There’s an interesting tale. We had two interns working on this project who were applying to graduate programs in conservation and took portfolios of their treatments to their admissions interviews. They presented this project and in both cases we heard our approach engendered considerable debate.

AM: Did they get in?

JS: They did. We can agree to disagree, but it shows that how you answer the question of what conservation is depends on your perspective. The debate keeps it interesting.

SFMOMA’s Elise S. Haas Conservation Studio is a major West Coast facility specializing in the treatment of 20th-century paintings and works on paper. In addition to caring for objects in the museum’s permanent collection, the laboratory offers professional services to other institutions. Jill Sterrett has served as head of conservation since 2000. Apollonia Morrill is the managing editor in communications at SFMOMA and a photographer. One of her pictures will be on view in The Anniversary Show, which opens in January.