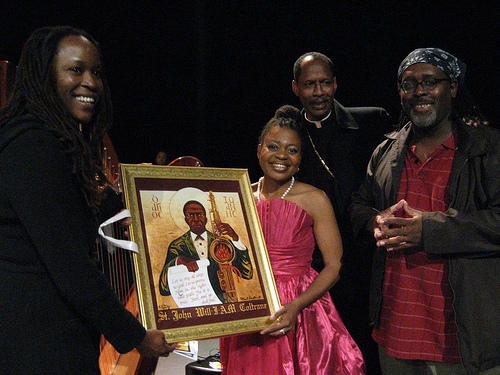 Destiny Muhammad is a harpist in the tradition of Jazz innovators such as Dorothy Ashby and of course the legendary Alice Coltrane. Both John and Alice Coltrane were renown for music that was palpably buoyed along by their spiritual convictions but unburdened by religious dogma. In other words if you knew nothing of their religious perspectives you were likely to be moved anyway. Destiny’s music has this affect as well and she brings the extra-added skills of a trained songstress to her mix of gospel inflected sacred jazz. So it was no surprise when Bishop Franzo Wayne King of San Francisco’s Saint John Coltrane African Orthodox Church appeared at the climax of this celebration of Oakland’s community treasure. Bishop Franzo King delivered a short sermon on the musical “trinity” of rhythm, melody and harmony with the sounds of Coltrane’s classic “A Love Supreme” presenting his words like a gift to the audience turned congregation.

After the concert the artist Mark Dukes presented a reproduction of one of the Coltrane church’s painted icons to Destiny. Dukes’ work is unique in that he brings the Byzantine icon painting tradition into the 21st century by immortalizing revered modern figures such as John Coltrane. The icons of John Coltrane at the Saint John Coltrane Church in the Fillmore district are particularly striking and beautiful. Dukes is also a deacon at the church. 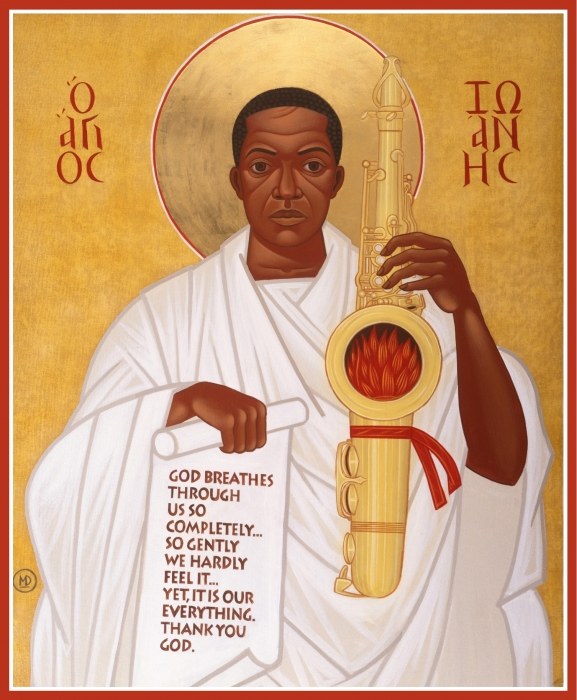 Seeing Destiny beaming with a glowing smile while holding the Coltrane icon was so special that I had to share it with the SF MOMA Open Space audience. 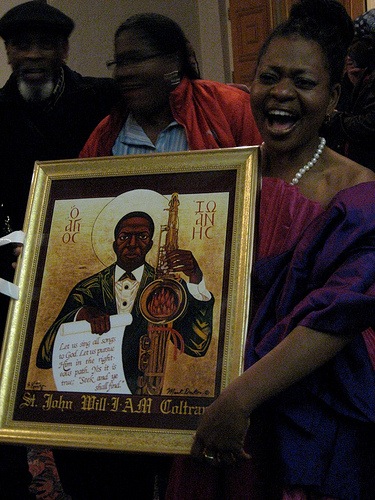