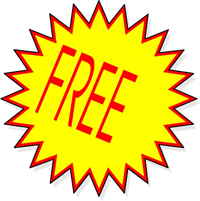 I heard an anecdote somewhere that the three words in the English language that evoke the most visceral response are “free,” “sex,” and “sale.” I’m not exactly sure if there’s a particular order to which is more popular, and it’s funny to think how someone could come up with a good marketing slogan involving all three at once and create the best business model ever (“Free Sex Sale?” Uhhhh. Now that’s a bit of contradicting genius, isn’t it?).

Let’s focus on just one of those words right now: FREE.

I’ve been sick for almost four days, holed up and trying to take advantage of the fact that a lot of TV shows are available online via websites like Hulu, etc. So far I’ve watched the first few episodes of PBS’ NOVA series “Becoming Human,” and marveled at the sort of stiff animation of our ancestors (available streaming for free on the PBS site), as well as several installments of the docu-drama “Secrets of the Dead” (one, on the Great Influenza pandemic of 1918 -was not the most enlivening to view while being ill, I might add). Also some episodes of Season 6 of Project Runway on Lifetime.com, my shameful pop culture vice (“Make it work!”). But I was supremely let down to find out PBS had just yanked their Michael Pollan epic “Botany of Desire,” from the free section and had just missed viewing it by a day.

So in the midst of this FREE-for-all I wanted to alert everyone that for a limited time every episode of Art21 (“Art in the Twenty-First Century”) documentary series on contemporary art is available to view for free. The new season has some great episodes with William Kentridge, Cao Fei, Paul McCarthy, and more. Catch it now! It’s your tax dollars at work! OK, well I guess it’s really not free, is it. Arrrrr. 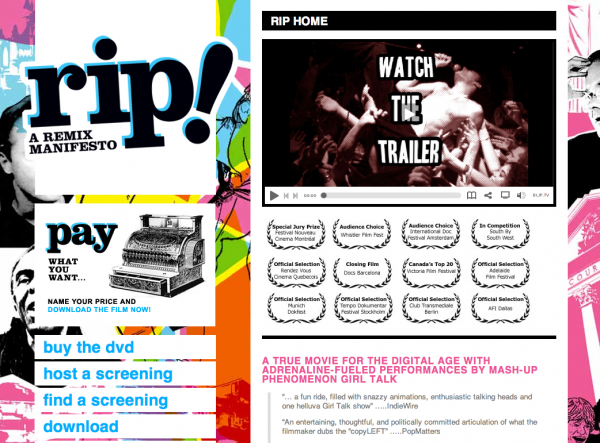 Also, a while back I discovered an amazing Canadian documentary called “RIP: A Remix Manifesto,” which explores issues of copyright and media appropriation in our late-capitalist culture. With interviews with copyright lawyer Lawrence Lessig, musician and Girl Talk frontman Greg Gillis, and a most wonderful section on how Brazil has taken on issues of breaking copyright (in this case pharmaceutical) for the sake of medical equity for its people, this is a wonderful documentary. All that and cameo appearances by Gilberto Gil? OMG. The cool thing is that you can purchase it for download on a pay-what-you-will model, a pioneering example along the likes of Radiohead and others who are trying to navigate the new world of digital downloads and cutting out the middleman distributor. I highly recommend checking this out — it’s fresh, funny, political, and will energize your thoughts about creative production in a media-saturated world. Also, despite the fact that free is fun, I will gladly pay to support an artist’s project directly.

Now back to the big question: watching Battlestar Gallactica Classic or Project Runway? Or maybe flipping through the latest US magazine and checking in on that affair Fergie’s husband may have had. Being sick certainly has its charms…