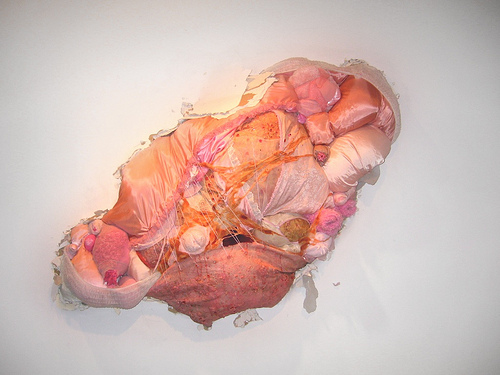 I keep being on tour with Sister Spit, and we keep rolling into these art spaces to do our show and the art spaces keep having these pieces on the wall that are really alive on the wall, coming off the wall, escaping, bursting through the plaster like the Kool-Aid man if the Kool-Aid man was maybe female, sort of lumpy and luscious and labial. Pillowy and tactile and pink. I guess right now I mean Liesa Lietzke’s Polypsis, currently straining through the wall at The Lab on 16th Street, a bulbous mass of conjoined fabrics, Red Hots, strawberry Nerds, and other sweet debris. Things swept the floor of a little girl’s bedroom, the sort of little girl who has a sugar problem and lives her life in tutus and maybe isn’t even all that little. But Polypsis is, like, a tumor, right? So now I wonder why I see something so totally vaginal when I look at it. Artsy representations of female genitalia tend towards, you know, holes. Polypsis is creating the hole, all that unruly pinkness smashing through, the crazed pink head of a baby alien drag queen crowning  – wait, that’s vaginal again, I can’t help it, it just looks like the most aroused pussy ever tearing through its panties. How is femaleness like a polyp? I’m thinking of the mutant, monstrous femaleness of high femmes, the female body just falling out of itself, its clothes, how easy a female body can be inappropriate,, because it’s a trans female body or because its fat or overtly sexual.

It doesn’t take a tumor to feel betrayed by your body, to feel it escape your control like a cell hell-bent on dividing, and dividing, an dividing. Last night after Sister Spit’s show at  Compactspace, a teeny, cool gallery in downtown Los Angeles, we drove to Canter’s deli like we always do, for pickles and matzoball soup, and when I got out of the van I learned I’d bled all over the back of my dress. Happened again today, happens all the time, it’s casual and daily, the autonomous wildness of my body, yours too I’m sure. So Polypsis, for me it was all about a big, turned-on, birthing, drag queen tumor of a pussy breaking through.

The alien girl art at Compactspace was more oozing off the walls, sliding and crawling, also replicating but not so organic as digital, some sort of cyborgian slime. It’s actually called Alien Organic and the artist is Julia Westerbeke.  Using materials like burnt Styrofoam and melted plastic its more like Human Toxic. I’ve often thought that the outer-space aliens people claim to get visited by might just as easily be humans traveling backwards through time and evolution to try to understand just how the hell they turned from us to them. Couldn’t we be moving towards giant heads for our overanalytical brains; long, bulbous fingers for pushing buttons; skin with a whole new hue for a whole new atmosphere, morphing to bleeding spitting ejaculating and secreting liquefied Styrofoam. 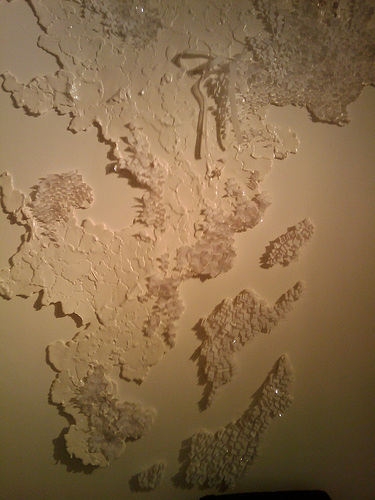 At Compactspace the art crept down the wall and spilled across the floor, and the nice people who run the gallery covered it up with plastic, like condoms or dental dams. You wouldn’t want to nudge up against it while listening to poetry and find yourself mysteriously impregnated with some Styrofoam-based life foam, a viral pregnancy perhaps. A long dense string of it hung like a snot stalactite from the ceiling, the curling mucus of it stiff, hardened. We had to arrange the chairs around it and the gallery owners asked me to please ask the audience to be careful with it when they moved around. Of course no one wanted to touch it but everyone wanted to touch it, like the urge to pick your nose. The organic is always disgusting, there’s no escaping the wily uncontained rot of ourselves, no way around it except splat into the middle of it, making a party of it like that joyful polyp bursting through the wall with such exuberance and glamour.