Seeing with the Blackeyed Pea: The Art of Letitia Ntofon 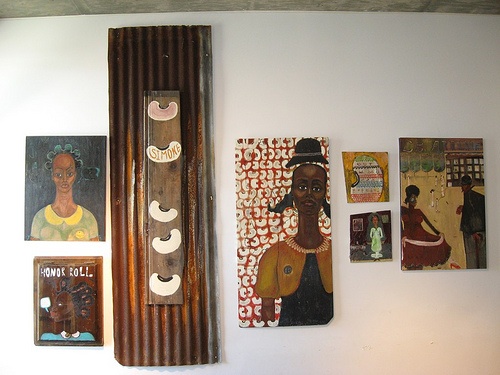 My first encounter with Letitia Inyang Ntofon’s paintings was in The Black Dot Café located at 1195 Pine Street in deep West Oakland’s Black cultural district known as The Village Bottoms. I have known her for several years but mostly as a poet and writer. Her paintings, especially as they were arranged and installed on the wall in this location gave them an elusive narrative quality that grew the more that I looked at them. They felt like a story without a specific plot that contained many inscrutable details. Of the seven pieces at least two of them are self-portraits and that underlines the aura of autobiographical narrative in the paintings. They are made of found materials in irregular sizes that range from plywood to furniture fragments.

I was given another clue to the elusive narrative by the title that she gave for her seven painting installation. “Ekpu in the Fattening House.” I asked her what the title meant and she said that “…Ekpu are ancestor figures from Oron, Nigeria where my father is from. Fattening houses were traditionally where women learned the secrets of being a woman. When I started these paintings, I felt like an actress in a play in a way—I became possessed with the spirit of a young woman, a rebellious woman, entering the fattening house. She is questioning tradition, expectation, nobility. What you see here, might be something she hid away in a crevice in the house.” The artist/actor is trying to hold on to, secret away even, some small remnant of her own individuality as she goes through the ritual that makes her conform to the societal expectations for what a woman should be.

Ancestor veneration and ritual is a common concern of contemporary African Diasporic artists not only as personal reflection but the willful retrieval of African cultural ethos. Ntofon’s work draws on that ethos consciously and uses the form of some African writing systems to convey ideas about ancestor veneration and vision. 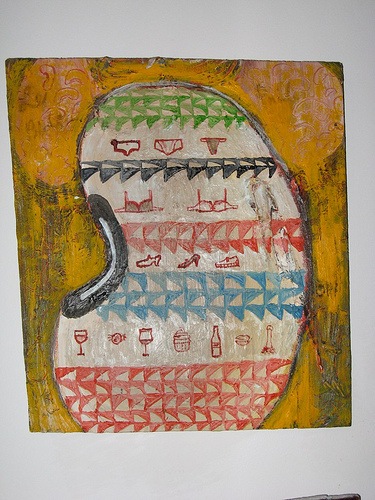 The small piece that is fifth in the sequence of paintings is titled “Initiation #1” and it directly draws from symbols used in West African secret societies. Ntofon clarified that the type of writing systems she is using, “…are symbols of the Ekpe society, also found in Oron, although it is not the only place where it exists.” Some examples of those writing systems are nsibidi writing originating from the leopard societies amongst the Ejagham people of Nigeria. I find that her work shares affinities with contemporary African artists such as Victor Ekpuk who also draws upon nsibidi writing and paints on found objects for a considerable part of his work. “Initiation #1” is one of three paintings that use the image of the black-eyed pea. Another is the self-portrait titled “Sumthin To Eat” that contains an engaging backdrop of black-eyed peas playing against just enough red between each pea to expose peeks at the plywood surface that it is painted on. 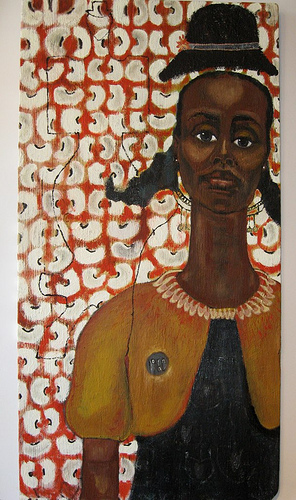 Ntofon says “…the pea for me also masquerades as the Oron“ordeal” bean, aka Calabar bean, a poisonous bean which was used to reveal alleged witches. The ordeal bean almost always killed those it accused, but if you were somehow able to still be breathing…you weren’t a witch. Some of its properties have been used in treating diseases of the eye, which is interesting to me…the whole connection to vision. Then, I think of how in a way the black eyed pea is our Black American ordeal bean…if these beans could talk they could probably tell the secrets of our whole history here.” The shape of the Black eyed pea could also signify the womb. Her reference to witches, and the allusion to the womblike pea as a revealer, speak to the hidden power of vision. In his classic work “Souls of Black Folks”, W.E.B. Dubois’ famously spoke of Black people being, “…gifted with a second sight in this American world…” The Black eyed pea in these paintings seem to serve as a metaphor for that particularly Black historical vision in America. 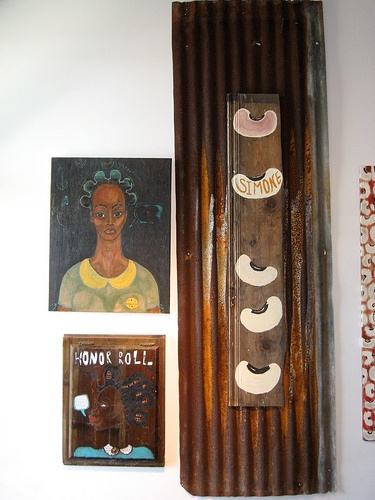 The third painting is a large vertical piece done on found wood mounted on a piece of corrugated metal of the type commonly seen in West Oakland as fences. Five large black-eyed peas dominate the piece. One pea contains the name “Simone” probably in remembrance of the great singer Nina Simone. The piece ties the artist’s use of her local environment to her concerns with Afri-diasporic symbolism. The corrugated metal is used in ghettos, favelas and shanty towns from the Jacarezinho favela in Rio De Janeiro to Lagos, Nigeria.

Although she is a self-taught artist, these types of aesthetic concerns prevent me from mistaking Ntofon’s work for the kind of self-taught art that Horace Pippin or Clementine Hunter may have produced in an earlier era. Her art consciously connects African ritual symbols (the Oron ordeal bean and nsibidi writing) to symbols common to the African experience in the Americas in the form of the black-eyed pea. Cornel West wrote of Horace Pippin’s art that it exemplified the crisis of the black visual artist in America. A crisis that West says was described in iconic terms by W.E.B. Dubois’ notion of “double consciousness.” “One ever feels his twoness – an American, a Negro; two souls, two thoughts, two unreconciled strivings; two warring ideals in one dark body, whose dogged strength alone keeps it from being torn asunder.” But Letitia Ntofon’s work has more than a concern for the false dichotomy of a “twoness.” She is concerned with a whole myriad of aesthetic strategies that transcend being labeled a western construct called a “negro” and another western construction called being an “American.” She is not seeing herself through the eyes of the western status quo. She is accessing the symbols and vision of African ritual. In doing so she also allows herself to reclaim stereotypic identity labels and use them as she sees fit. 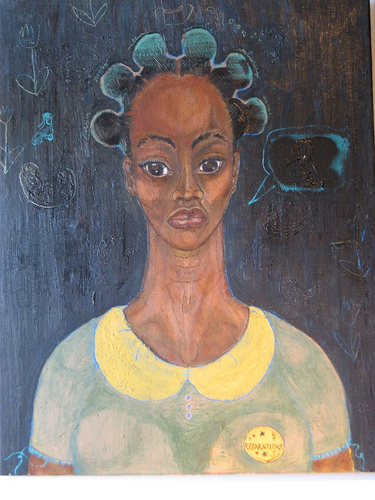 The self-portrait entitled “After the Riot” exemplifies that tactic. “After the Riot” shows Ntofon as a wide-eyed seer with her hair worn in six knots atop her head. Each knot has a word written above it that is representative of various identities that Black folks navigate with or through. Above her head is written the words “nigger, negro, nationalist, militant, revolutionary and savage.” She explains, again drawing on the work of literary and stage artists, that her inspiration for the identities represented in this self-portrait come from,“…themes that the genius Barbara Ann Teer founder of the National Black Theater in Harlem, who died last year, worked with in her theatrical works. I was inspired by these, as phases of consciousness that we as Black people move through on a constant basis, intentionally and unintentionally. Teer made these as a rites of passage in a way. I added ‘Savage’ as another phase to move through, a self-acceptance of our cultural fierceness that can be used for either negative or productive purposes, and also a reclamation of how it has been used in the past against us.” The great poet/philosophers Leopold Senghor and Aime Cesaire used a similar tactic by reclaiming the French epithet negre and reincarnating it as Negritude or Blackness. 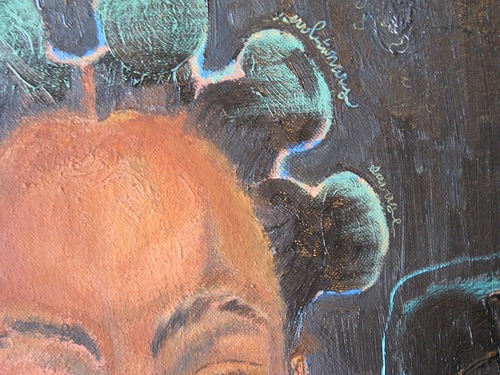 After the Riot (detail, “Revolutionary”, “Savage”)

Letitia Ntofon’s work is one example of Black artists who make their art practice one that looks at African ontology such as that exemplified in the “fattening house” and applies those ways of being as their primary mode of self-reflection. This visual narrative is not genuflecting to the European canon to legitimize itself. Her work lends an open space for me to view her art and apply my own speculations about the story that was being told. I invite readers to come to west Oakland and view this work to see what your experience of this oblique story is.

Note: I would like to thank my wife Adeeba Dwanimen Deterville for assisting me by sharing her insight about the symbols relating to womanhood in Letitia Ntofon’s paintings.