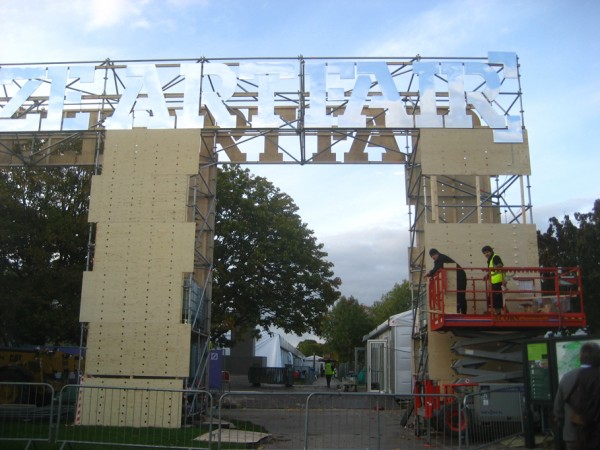 Dear Open Space Diary, (from here on out to be referred to lovingly as “OSD”)

Well, here I am in jolly old London. Hal-lo!!! 🙂 🙂 🙂 I touched down earlier this afternoon and the plane ride was pretty good because it was a direct flight from San Francisco to Heathrow. Wow, it makes such a difference to have no stopovers! But honestly the airplane food really sucked. Oh well. The good thing is that the time difference of 9 hours seems like a thing of the past already. I am officially feeling like I can convert to UK time in a flash! Thank god, because from here on out it’s gonna be all about work, work, work. Sigh. 🙁

OSD, where do I even begin? I’m on the first leg of a two week journey of exhibitions, bouncing from the Frieze Art Fair in London to P.S.1 Contemporary Art Center in New York, and then back to hometown San Francisco. It’s exhilarating and also kind of nerve-wracking, actually. Great because I get to travel and go places and show artwork. But hard because it’s like being thrust in new contexts and new people and places at every turn. Dude. It’s, like, INTERNATIONAL and stuff. So, here’s the deal: I’m in London for the next nine days to present my Frieze Project commission “COPYSTAND: An Autonomous Manufacturing Zone.” And, like, I know this isn’t my own personal blog but you, OSD, are such an artworld-related thingamabobbie that somehow it makes sense to try to report back from these far-flung art arenas in some way. Or at least try to do so from a personalized artist perspective.

I know, I know. You’ll read all about these Fairs and shows in some art journal down the road anyway. But they’ll be the type of writings that are all about high-faluting criticism and theory and stuff. (Which I love by the way, don’t get me wrong, Julian!) But the behind-the-scenes thing from an artist/producer’s perspective? That’ll be harder to find… So, hello! Here I am!

Actually, in all honesty I’m not sure how behind-the-scenes I can get. I’d love to show you all the photos of drunken art patrons falling all over themselves during the champagne receptions and afterparties. I mean, who doesn’t love a good art fair shenanigan story? Remember Miami Art Basel in 2007 when Takashi Murakami threw his big afterparty at that club that was just a hair’s breath away from being a stripbar? But that could get me in a heap of trouble and may be a bad career move. Haha.

But in all seriousness (or at least semi-seriousness), this is serious. I mean, serious like my artwork serious. And that’s SERIOUS. As I sit here in my Holiday Inn for the next nine days, I ponder what will happen when thousands of people tromp by my project booth. Will it be the sound of crickets and tumbleweeds? 😐 Or will it be applause and approving murmers?

Why, oh why, do artists even subject themselves to being present at art fairs? Like a much-respected conceptual art teacher of mine put it way back during my undergrad days at the San Francisco Art Institute: “it’s why cows don’t visit the grocery store.” (ergo, he meant something along the lines of artists being meat and the grocery store has the meat aisle. Meat for sale. You know what I mean?).

OK, g’nite OSD… It’s nine hours ahead here and I do admit I’m feeling tired. Tomorrow: gonna check out how my pre-install has been going without me at the Frieze Fair, first thing in the morning. It’s three days before the big grand opening to the public and I’m excited to get cracking 🙂