At Home with Cristy Road

Drinking the most anemic, milked-down coffee at a breakfast joint in Providence, Rhode Island, I so wish I was back in Cristy Road’s lightless, ornamented punk rock palace. The walls are covered, like totally covered, with Cristy’s illustrations, inky and graphic and punk and female, girls breaking down or falling in love or both at the same time while crowd surfing with octopus at a punk show. Cristy is often asked to create art for the bands and businesses who, at a glance, know they share the same political aesthetic as Cristy. She did the T-Shirts for the feminist book store Women and Children First in Chicago, she did the cover of the 3-wave feminist anthology We Don’t Need Another Wave, she made Sister Spit’s 2009 graphics and she created an awesome burning cop car for a show about queer street protest I curated this summer. The cop car was blown up and submitted to the art director of the Green Day musical happening in Berkeley, who was soliciting art to plaster across the stage’s backdrop. This is super perfect for Cristy because her name was lifted from the lyrics of a Green Day song and she is so obsessed with the band her first artistic offering was Greenzine, a true fan-zine, and her current work in progress is an illustrated novel about her love for the band. After the publication of her last illustrated punk rock roman a clef, Bad Habits, Green Day’s Billy Joe sent Cristy a hand-written fan letter, calling her a miracle. The real Christie Road is a street in the East Bay, with a sign that is regularly stolen by mad Green Day fans. Cristy has one hung above her work station. She told me they’re really hard to steal now cause the workers hang it way high, out of the reach of thieving Green day fanatics. 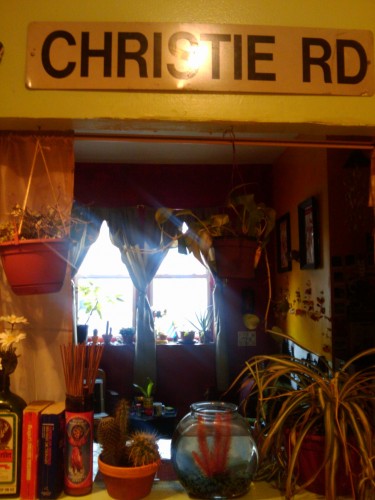 The rest of the room half-plastered in Cristy’s artwork is wallpapered with various posters of glamorous women, mostly Madonna, as Cristy’s roommates are a gaggle of punked-out fags not too punk to love Madonna. They are, after all, drag queens as well as punks and on my visit one, a fashion designer, was holding white denim vest tricked-out crusty-style in patches and studs, under the kitchen sink, dying it sepia with tea. The other were sprawled in the cavernous living room, stoned and eating coffee cake and giving themselves clay masks and watching The Golden Girls amidst the decor – a live iguana, clown dolls, a crazy mannequin named Pompeii, a gun vase stuffed with glittery fake flowers. Diana Ross posters hang on walls, Hole, too. Perpetually exhausted as the endless tour rolls into its seventh week, I had tugged my luggage through the Hasidic Brooklyn neighborhood Cristy lives in, and she rewarded me by making me a giant cup of Cuban style coffee like her grandmother makes, in a metal espresso pot thick with sugar and cream. Even though this tour has given me a caffeine tolerance that has rendered Red Bull useless, I sip the Cuban coffee respectfully, knowing that it has the power to Fuck Me Up. 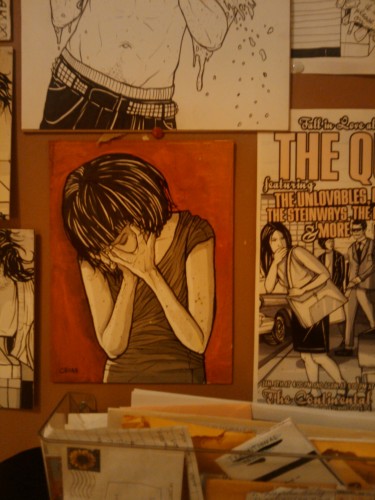 I haven’t seen Cristy since the Sister Spit European tour one month ago, but it seems longer than that. On that tour, girls would show up at our shows in Vienna, Germany, London, wearing t-shirts with Cristy’s art on it, looking at her the way she looks at Billy Joe. When you are a struggling, working artist just trying to get your work out there, keep it out there, pay the rent, it can feel like, What am I even doing this for who cares it’s not curing cancer or feeding people or anything. And to go to a whole other land and learn that your work has, without you knowing, traveled overseas and joined up with other subcultures hungry for awesome representations of girls, queers, people of color, all of them rising up in the streets, marching and dancing and making out, all while looking totally cute – it is sort of a major personal revelation and it was mighty cool to get to see that happen with Cristy. 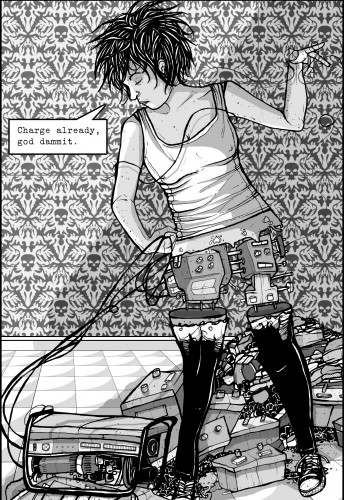 That night at the Sister Spit show at Bar Sputnik in Brooklyn, Cristy guested with us, climbing on stage in a little plaid dress and peaked cap, looking like an adorable punk room gnome, she read from Bad Habits while flashing images from the book behind her on the stage. The novel, so autobiographical Cristy jokes about it before reading every time (“The narrator is Cuban-American, like ME! And she is in her twenties, like ME!”), details a lost but dogged young female punk’s immigration from Miami to New York City, broken down from an abusive relationship but determined to find her way out of it, even if she has to utilize some rickety coping mechanisms (cocaine, one night stands) to get there. The piece she performs features the narrator discovering that its her own body that contains all the potential for joy and pleasure and she doesn’t need any other person to access that. I’m talking about masturbation, and Cristy talks about it in her native style which is a excellently odd mixture of super heady, almost academic-speak soon to be exploded with curse words, slang and plain-spoken dialogue delivered in Cristy’s affected stoner accent, to the crowd’s delight. The piece crescendos with the narrator climaxing to the strains of Iron Maiden leaking down from the metal head upstairs. And I say as she exits the stage, Cristy Road: Keeping masturbation metal. If you happen to live in Gainesville, Florida you will get to see Cristy’s work live and in person. The rest of us will have to settle for visits to her web site, http://www.croadcore.org/, to gaze at girls with melting faces and other bizarre and beautiful works. 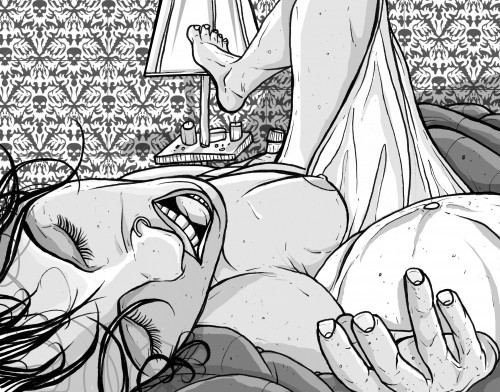