In the mid-90s, on the block of South Van Ness bordered by 16th and 15th streets used to be a little art gallery called Bewegung. It was the brainchild of Heather Haynes, a student at the San Francisco Art Institute. Heather lived in the back and the gallery was in the front. Heather was my best friend for a bunch of that decade, when I was young and just moved to San Francisco. I would come over to the gallery and Heather would be giving the whole space a spiritual cleanse, mopping it with a solution of like cow’s milk and blue crumbly balls of something from a Botanica in the Haight plus flower petals and when she was done she’d go in the shower and give herself a spirtual cleanse as well, dumping this great-smelling potion over her shaved head. The whole space used to be a Chinese restaurant – Heather would find animal carcasses in the backyard while gardening – but now Heather had performance and art in the windowed storefront while she and a roommate lived in stilted wooden boxes in the back, like treehouses. I was always locking myself out of my own house and sleeping at Heather’s house, in her cloud bed made of piles of down comforters and tossed with throw pillows stuffed with vetiver. If it sounds magical it’s ’cause it was. I once even saw a ghost hanging out over Heather while she slept, but that is another story. 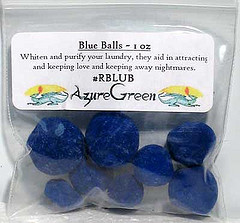 Nobody is endorsing this particular brand of magical blue cleansing balls.

The best show I remember from Bewegung was Charles Herman-Wurmfled, the jack-of-all-trades who went on to make a bunch of movies, first Fancy’s Persuasion, a classic in which he cast Justin Bond as the mom a la’ John Waters’ choice of Divine as the matriarch in Hairspray. After that he did Kissing Jessica Stein and next, amazingingly, Legally Blonde 2, but I remember when he hung a bunch of art involving blue maribou on the walls of Bewegung and in front of it I go-go danced, topless and painted blue, wearing shitty cut-off jeans and combat boots, to the sound of Hole blasting through my Walkman, while balanced on a cinderblock. A few other ruffians were similarly Smurfed-up and stuck on a block to dance to the beat of their own Walkman, while off to the side a cellist played elegant music. It was kind of amazing.

Now Heather lives in Toronto, where she runs Toronto Free Gallery www.torontofreegalery.org  an art spaced dedicated to showing work that deals with social justice, cultural, urban and environmental issues. TFG is sandwiched between a tattoo parlor and a Caribbean patti take-out joint, and the owners of the take-away place did a Caribbean  patti workshop as a part of the current exhibition curated by Maiko Tanaka, Tejpa Ajji and Chris Reed. It’s that sort of true community space. The current exhibition, Toronto Free Broadcasting currently has  an open call out for instructional videos and a bunch already received are up on their site, assisting with hands-on problems like How to Break Into a Hotel Room, as well as more conceptual issues like How to Become a Hot Chick or How to Ruin a Relationship. http://torontofreebroadcasting 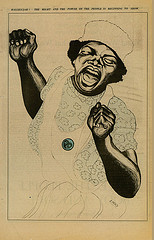 Emory Douglas, Hallelujah! The Might and the Power of the People is Beginning to Show, from The Black Panther Newsletter, May 29, 1971

Heather Haynes is also publishing the art, media + politics magazine Fuse, which has an awesome cover story on the art and career of Emory Douglas, the Black Panthers’ Minister of of Culture and the creator of all of the movement’s amazing graphics, an excellent mix of pre-punk folk art depicting yelling ladies and kids bearing protest signs, beaten pigs and of course Huey P. Newton with a gun. Some looks like zine art and some like  propaganda and all are so full of beautiful energy and dynamic gusto. They look like they could have been created yesterday and, in the words of the artist, “You’re talking about unemployment, decent housing, dealing with the prison industrial complex, and the disproportionate number of people of color dying in the military. All those things still exist today.”

When Sister Spit was just in Cleveland some local queers gave us the hard sell on their town and claimed it to be akin to San Francisco in the 60s or the East Village in the 80s. I don’t think this is true, but the rumors are coming in that this might be the case for Winnipeg. Writer Eileen Myles was just up there reading from her brilliant new book The Importance of Being Iceland (so brilliant it made me cry in the tour van three different times with three different emotions) and she said it’s like the coolest place ever, and an article in Fuse that talks about the scene also makes it sound like one of those beaten down cities that eventually produces some cracked-out cultural diamond. But my favorite part of the article is the bit about how someone vandalized a new and heinous luxury condo development with the tag BAYAREA! Ouch. The truth hurts. http://www.fusemagazine.org/