Wonderland: A world turned upside down

Wonderland: a land of wonder, curiosities and marvels.

Wonder: something strange and surprising. A cause of astonishment.

In the popular novel, Alice and her Adventures in Wonderland by Lewis Carroll, a young girl follows a rabbit down its rabbit hole to find herself in a place that, from her perspective, is full of nonsense and chaos. In Wonderland Alice meets a cast of characters, anthropomorphic plants and animals and travels through a fantasy land that is far from the hum-drum bore of the world she just left behind.

The Wonderland that curator Lance Fung refers to in his upcoming public, collaborative project is far from the fantastical space of Carroll’s novel. Fung’s Wonderland is the Tenderloin. Tucked between wealthy neighborhoods like Nob Hill and Union Square, the Tenderloin is a small, densely populated neighborhood. The Tenderloin, like many urban areas, is a difficult place to describe and categorize. The Tenderloin has the highest percentage of families, children and immigrants living in any area of San Francisco. Its residents are largely low-income people who are marginalized due to class, citizenship status, race, gender and sexuality, many of whom do not get the social services they need.

Fung has curated ten collaborative groups to create projects in multiple sites throughout this neighborhood including public venues and community organizations. The project features forty-six artists, including those currently living in San Francisco, and other artists both nationally and internationally located. Wonderland began as a graduate level course taught by Fung at the San Francisco Art Institute. According to the press release, Wonderland is “born of and responds to” the diversities of the Tenderloin. The show’s primary audience is cited as those who live or work in the Tenderloin. Later the press release states that it will transform the Tenderloin into a destination for tourists, opening on October 17th with a block party in Boedekker Park, the projects will remain open for one month. Wonderland is sponsored by the North of Market Community Benefit District and several galleries in the area including the 1AM Gallery and Ever Gold Gallery.

Those are the facts: the title, the neighborhood and the project. To be honest, my research about Wonderland has raised a lot of complicated feelings and concerns for me—many of which are difficult to articulate and relate to many broader issues I have attempted to address here on Open Space; questions related to public art, to socially engaged art practices, to gentrification and  specifically to San Francisco’s uneven economic and social landscape.

Izida Zorde articulated similar concerns in her introduction to the recent July 2009 issue of the Canadian arts journal, Fuse. She states, “Many artistic interventions that skirt the surface of social networks—when divorced from the desire for community empowerment and transformation—can actually have the effect of institutionalizing the negative social impacts of a neo-liberalizing society. What responsibilities do artists working in relation to communities have to engage not just with their surface but also with their underlying politics and realities?” Zorde’s questions couldn’t have more relevancy to Fung’s exhibition. While the Wonderland press release acknowledges the complexities of the Tenderloin and many projects may benefit the community members they directly engage with, I’m concerned about the goal of “renewing the neighborhood as a tourist destination,” as stated in the press release. I’m also concerned about the sustainability of these projects and fear that Wonderland will re-brand a low-income neighborhood as an “arts district” without addressing the underlying politics and realities for those who live there now, not those who may move in once new galleries open and property values rise.

There are several projects included in Wonderland that do engage directly with community organizations and non-profits. The collaborative group “Cents” is working with the Boys and Girls Club, producing drawings based on the children’s ideas of home and shelter. The drawings will then be assembled into a three-dimensional structure and displayed in various locations throughout the Tenderloin as a way of engaging with the public. Postcards of the drawings will be made available and passersby will be encouraged to write their own messages about home on the back. Other projects include engaging with small business owners, interviewing senior citizens about parenting, creating a radio broadcast of residents singing songs in a variety of languages and a collaboration with the after school program at Glide Memorial Church.

One project is particularly troubling to me. The project “Offstage” began with research into the history of the Tenderloin as a theater district and extends this history to what is described on the Wonderland blog as “the theatricality of the streets” that depicts “human drama in extremely raw form.” The artists describe the inhabitants of the Tenderloin as conducting “melodramatic behaviors common to urban vagabonds” often induced by inebriation. In order to make visual this phenomenon, as they describe it, the artists chose to abstract and replicate sleeping bag forms, to reference those without shelter in the neighborhood and will install these forms in the windows of the Golden Gate Theater located on Taylor street. In the last paragraph of the project description the artists state, “In our installation, we bring focus to the life on the streets of the Tenderloin, allowing the spectacle of the street to take center stage. Consequently, the “characters” are brought closer to the streets by featuring a “show” that is available to all pedestrians and inhabitants of the neighborhood.” In conjunction with this project description, the blog features photographs that mimic those captured by surveillance cameras—images taken from afar, without the persons awareness, and altered to highlight them through a spotlight, as though to exemplfy exactly who this cast of characters are.

It remains unclear to me how this project functions within the framework of Wonderland as a community centered project whose primary audience is intended to be residents of the Tenderloin. While the artists were apparently inspired by their observations within the neighborhood, the perspective remains that of someone outside, falling back on the assumptions often made about people who live “on the wrong side of the tracks.” All too often urban areas such as the Tenderloin are represented one-dimensionally through the lens of all that is considered dangerous and illegal. Yes, there is crime in the Tenderloin, yet there are also internal communities within these neighborhoods and systems of checks and balances that often remain unseen to those who do not live there. 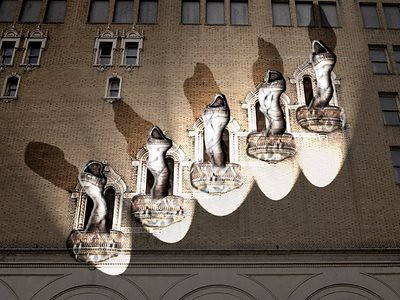 The true issue that underlies the premise of “Offstage” is a city government that continues to cut funding for a population of people who are addicts and/or have mental illnesses and are in need of basic social services. So long as clinics, rehabilitation centers, and shelters continue to loose financial support, the street will remain a site in which all areas of people’s lives are made highly visible. By naming this situation as a “show” the artists of “Offstage” invite visitors to observe this “spectacle” at a distance, from the position of an audience member, a tourist passing through the neighborhood. Additionally, the aestheticization of homelessness in the form of sleeping bags ascending from a theater does little to address the “social representation and change” as the description on the blog states. How do the residents of the Tenderloin, those “urban vagabonds” described in “Offstage” benefit from such a representation?

I’m not terribly interested in identifying which projects are more or less appropriate or community oriented and which are not, rather, my concerns lie with the framework of the project as a whole.  Certainly, Wonderland provides artists, particularly young, recently graduated MFA students with an opportunity to gain exposure and participate in a large scale exhibition, an opportunity especially exciting for those interested in socially engaged work. It is my hope that these artists reflect on their own position and consider how they are engaging with the Tenderloin community. As opposed to an ephemeral connection facilitated through an art show, building sustainable relationships fosters a more complex understanding of the Tenderloin. Artist, Michael Swaine’s project “Sewing for the People” serves as an excellent example of such a project. On the 15th of every month, Swaine sets up a portable sewing cart on Cohen Alley in the Tenderloin, repairing holes and mending clothes. Swaine’s project has continued for so long now that he has a regular clientele and has developed relationships with residents of the neighborhood. His project utilizes his own craft skills while offering a basic service to anyone who desires it.

The opening night of Wonderland will undoubtedly draw crowds of hundreds to the Tenderloin, given Fung’s reputation and the publicity that the show has received. The visitors will experience not only the individual projects but the neighborhood, as well. As the poorest, most stigmatized neighborhood in San Francisco will become highly visible for a brief period of time, the attention of the visitors or art tourists turned to the neighborhood itself. While I am a proponent of removing art from museums and making it more accessible to the general public, I am skeptical of this brief encounter with the Tenderloin, the lure and thrill of visiting San Francisco’s seediest neighborhood (a word used by Fung in the press release to describe the Tenderloin) for one night through a voyeuristic meandering. Within this scenario, I fear that the spectacle of the poor will remain in place and sustainable change and awareness about what is truly at stake for residents in the Tenderloin will be more and more difficult to enact.

It is not my intention to discourage artists from attempting to address politics or community engagement within their practice, however I think it is imperative to consider the broader impacts of our artistic practices within geographical contexts that we have little connection with. By not engaging with the underlying politics and realities within a place like the Tenderloin, artists’ projects have the danger of replicating power dynamics that help to sustain systems of oppression and social hierarchy. Within the context of the drastic funding cuts to social services in the Tenderlion and the extremely high rate of homelessness in San Francisco, it is imperative to question who benefits when the neighborhood is turned into a tourist destination? Whose lives are on display? Who plays the role of Alice, falling down the rabbit hole to experience a world turned upside down, only to wake up later and return to her safe and comfortable life? Who’s wonderland is this?