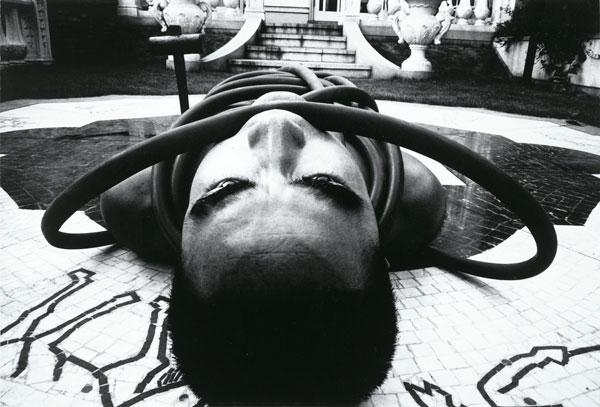 One of our current collection exhibitions, The Provoke Era: Postwar Japanese Photography presents a number of pictures from that turbulent moment in Japanese history. After the devastation of World War II, Japan entered a period of American military occupation and modernization. Photographers reacted to the drastic sociocultural changes taking place by forging a new visual language that broke with tradition while it memorialized the old culture and recorded the new. SFMOMA began collecting this work in the 1970s, under curators John Humphrey and Van Deren Coke, but the bulk of the collection has been built by senior curator of photography Sandra Phillips over the last two decades. Here, she joins in conversation with poet, essayist, and translator W.S. Di Piero, an avid fan of postwar Japanese photography. 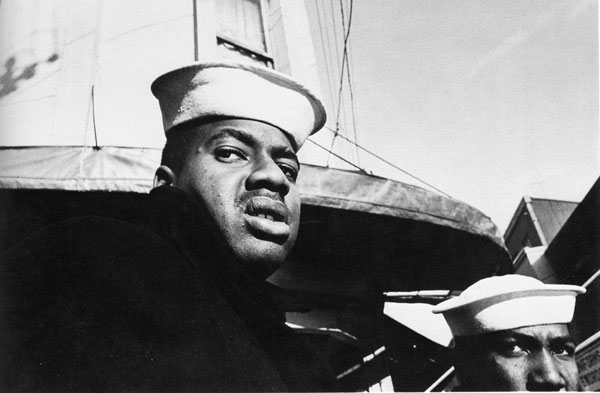 Sandra Phillips: Simone, what intrigues you most about postwar Japanese photography?

W.S. Di Piero : I’m interested in it for two reasons: it has the archival memorializing street photography does, and it’s archival memorializing that’s taking place in one of the most critical periods of Japanese history—that time from1945 to roughly the late 1960s, when the American presence was felt first in a terrifying way, and then later in a very different way during the occupation. And all of that was experienced and taken in by these photographers. I think Daido Moriyama was seven or eight years old when they dropped the bomb. He was young, but he was of consciousness when that happened.

SP: Shomei Tomatsu talks about being a kid of, I think, eleven, when he would not go down into the bomb shelters. Instead, he stayed upstairs in his room and looked at the bombs exploding, as though they were fireworks. He was both terrified and fascinated by them. I think that’s the whole key to his work, frankly, being terrified and fascinated by what’s happened. These photographers who experienced the war as children grew up and were—like the Japanese people as a whole—trying to deal with the fact that the Americans were still there, on all these military bases.

WSD: Looking at a lot of these pictures, I can admire them, and like them as pictures, and there’s also always a feeling of being behind a kind of cultural plate of glass. Something between me and whatever is transpiring before the lens. What about you? Why your attraction to this work?

SP: I saw a show when I was in New York in 1974 that John Szarkowski had put on, called New Japanese Photography. It seemed to me so different from anything else I’d seen that I’ve been trying to figure out what it’s all about ever since. It wasa a culture riven by its experience with America, both attracted to and made distraught by it.

I think there’s something fascinatingly ambiguous about a lot of these pictures. The question, what is Japan now? Is it something to be proud of or something to forget? What is the role of the American presence? And the destructiveness of the Americans? Our culture is so strange and ambiguous. How astounding it must be to see it through another culture’s eyes. I mean, we are amazingly violent and amazingly free. That’s something that’s been very liberating for the Japanese to digest, I think.

WSD: Yes, it’s a curious thing. In a sense these photographers were liberated by certain American things, like car culture. Or take this picture of Yukio Mishima [at top]—to my eye, it is as far as one can get from militaristic culture. What are those things wrapped around his neck?

SP: It’s a garden hose. You know, Mishima was a very wealthy man. And he lived in a neo-baroque or rococo palace, almost, with a very elaborate garden. So, when that picture was made, the photographer, Hosoe, who was very involved in dance, found this hose, wrapped it around him and made this strange and wonderful picture. 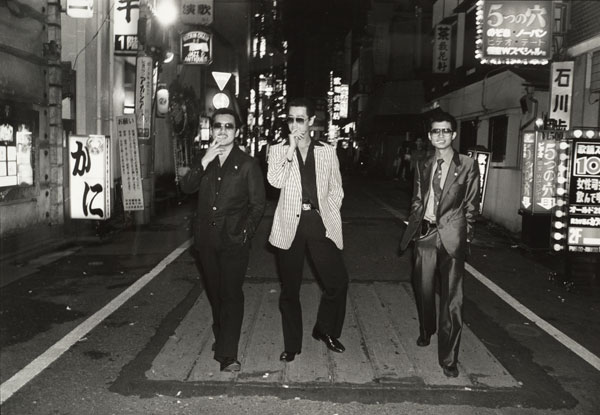 WSD: Another thing that strikes me about a lot of this work is how theatrical it is, whether it’s Moriyama’s preoccupation with masks and street theater, or Hiroshi Sugimoto’s vacant movie theaters. Or Katsumi Watanabe’s picture of the three gangster types smoking cigarettes. They’re really dressing the part—they’re participating in a kind of theater. Or, the Tomatsu picture of the girl with her hair over her eyes and the coke bottle. Do you know anything about it? 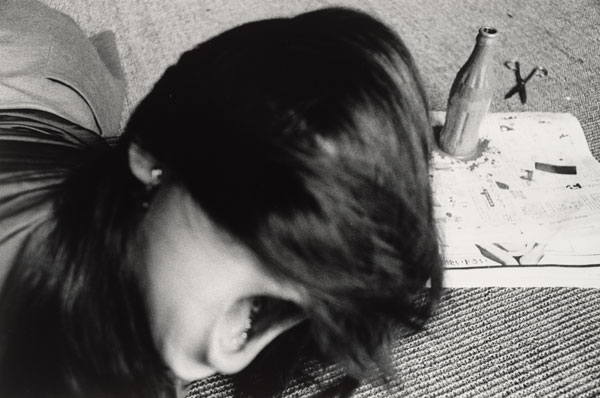 SP: She’s probably on acid or something. The picture appears in a book Tomatsu did about a part of Tokyo called Shinjuku, where all the wild nightlife was. The Golden-gai, as it was called, was made up of old barracks left over from the war—a holdover from the occupation. There were tiny little bars for all the different groups—the people who admired French New Wave movies would have their own bar, and the photographers like Tomatsu and his pals had a bar. And they’re tiny places, and you can only fit maybe twelve people, they’re just crammed in, but there are gazillions of them. And there were also movie theaters there, and after the movies were over, street performers would be out doing their thing, too. Tomatsu’s book is about the small theater groups that evolved on the street and the rebellious student activity that took place there, and the drug-taking and the sex and, you know, just being in the sixties.

WSD: Another thing that strikes me is there’s an extreme phosphorescence to the light in a number of these photographs.

SP: A lot of it is night light. 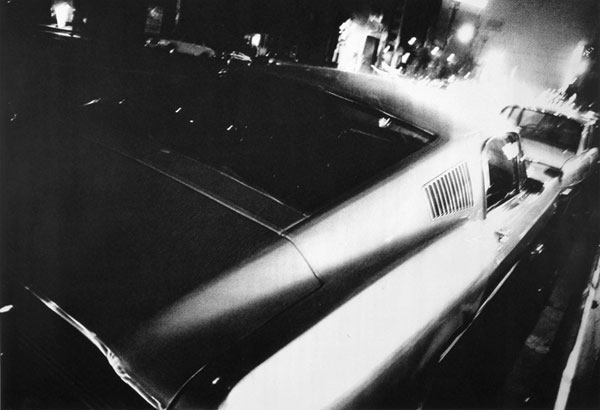 WSD: A lot of it is night light, and sometimes the light barely seems to have a shape; like in Takuma Nakahira’s La nuit series. He’s letting light explode, you know?

SP: Yes, the light in Nakahira’s pictures is amazing— kind of blindingly disturbing. Nakahira is a very interesting guy. He was very interested in Sartre and the French sixties student rebellion. For a very few, wonderful years, he made these amazing pictures, very large, which are not, strictly speaking, photographs. Politically, he didn’t want to make fine art objects, and instead produced what are really more like big posters. They’re original, one-of-a-kind pieces, meant to be tacked up on the wall. We’re very fortunate to have them.

And you’re right, there’s a really consistent interest in light, especially non-natural light, in a lot of this work.

WSD: Eikoh Hosoe’s Kamaitachi #31 is a fantastic picture. There’s that light again. The human presence seems to be something that is just sort of momentarily visiting. 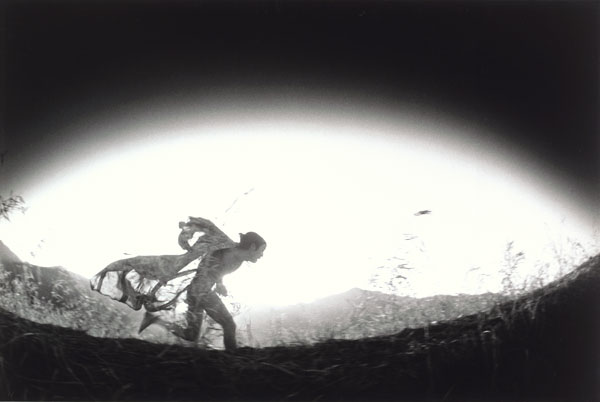 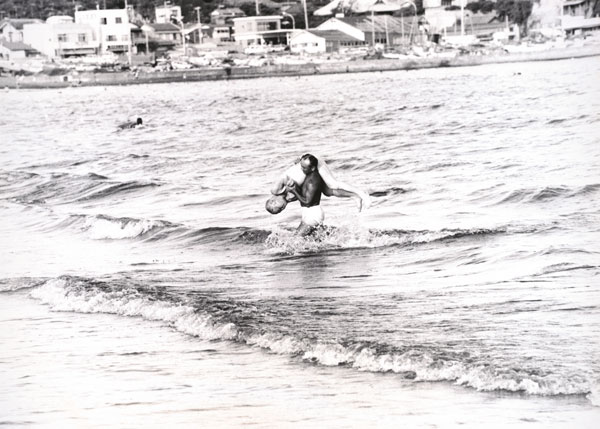 WSD: The picture shows a very tanned man carrying— Is that a woman he’s carrying? Can you tell?

SP: I can’t tell, for sure, but I think it’s another man he’s carrying out of the sea; it looks like he’s being rescued from drowning.

WSD: It only seems. It suggests a narrative, but doesn’t give you one. It keeps its secret.

SP: Yes, that’s true. Which is maybe why it’s so compelling.

WSD: These pictures by Yamazaki, are these time-lapse pictures? 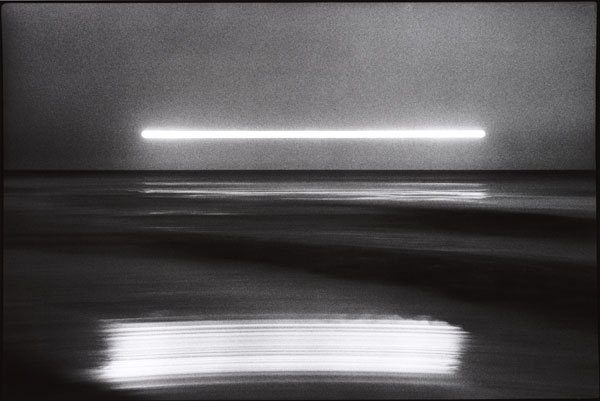 SP: It’s a series called The Sun is Longing for the Sea. The odd effect is produced by the photographer moving the camera.

WSD: This reminds me of something Moriyama said, that he often wouldn’t even look through the viewfinder, but just carry a camera around and snap pictures. His whole body became the camera. This idea of being in motion, that what the camera is recording is the motion of the body of the maker, and not even necessarily the eye of the maker is something I find really interesting.

In this Moriyama picture from the Eros series:  What’s going on here? Did he hire a model? Or did he find a prostitute to pose?

SP: I think this is a girlfriend, actually. And I think this was taken in what are called ‘love hotels’. In this series the pictures are all slightly out of focus, and very beautiful. They were published in a magazine called Provoke, which was the most important magazine dealing with photography of this period—the alternative photography of the late sixties, early seventies. Provoke only lasted, I think, three issues, but these were published in them.

WSD: They almost look like he’s trying to find a way of taking certain kinds of pictorialist values and do something new with them.

SP: They’re very erotic pictures, and a little bit raw. And by taking them a little out of focus, he makes them, I think, exactly what you say, kind of pictorialist, in a way. Kohei Yoshiyuki is a photographer who was also part of this moment, or a little bit later. He made totally voyeuristic pictures, taken after the invention of the infrared light bulb, of people in public parks, usually having sex, or in places where there is sex, or has been sex.  For example, this untitled picture [below] was taken in a park in Shinjuku, where urban development was newly underway. 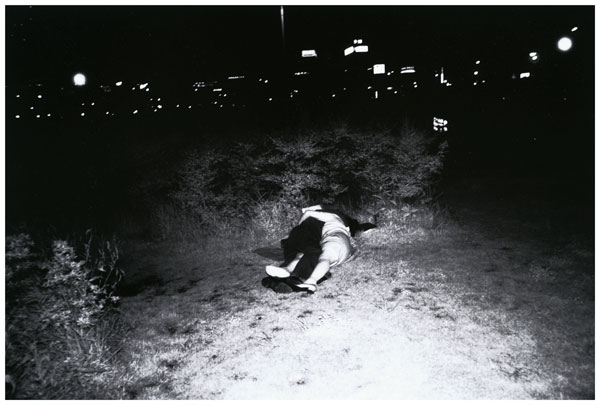 SP: Yes. It’s amazing! You can see the lights in the distance.

WSD: Well, this wasn’t taken with a long lens! He must’ve been pretty close.

SP: He was definitely close. [They laugh.]

WSD: The halo lights of the city appear almost as if they’re watching. It looks like a scene out of Midsummer Night’s Dream. It’s so bucolic.

SP:  Simone, of these Japanese photographers, who most interests you?

WSD: The two that really capture my attention are Moriyama and Hosoe. I feel a certain sympathy with Moriyama, because there’s so much about him that was contrary. I think he wrote somewhere that he’s not against consumerism, he’s not against America, he’s not against American culture: he’s against photography. I find that most appealing. The work feels to me like it is coming out of a kind of resistance—whether the pressures are formal pressures or social, political pressures. And there’s a real urgency to all of these pictures, as if the photographers can’t possibly take in as much as they really want to take in, and so are moving as quickly as they can.

SP: This is a cultural moment that’s specifically Japanese.

WSD: What’s our equivalent here, a period when American photographers might have felt similar compulsions?

SP: Maybe the thirties, when things were so vulnerable and life was changing, and not what it was before. People were coming to California from Texas and
Oklahoma and living in tents. It seems to me there was a very profound cultural reaction to real events, both physical events—you know, the climate—and economic events. Maybe that was, in some way, equivalent to what the Japanese were trying to deal with during the postwar period. 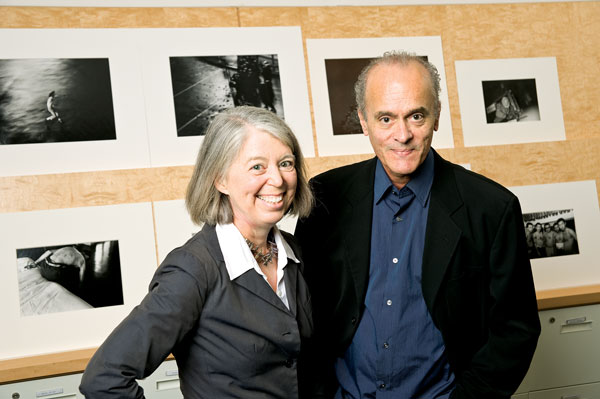 WSD: That makes a lot of sense to me. There was also a sort of visual voraciousness, to take in as much as possible of what was happening.

SP: To try and understand it, maybe.

WSD: Yes. I think the understanding always comes later. First you make the archive, and then you try to figure out what has happened.