Five questions to SFMOMA visitors, artists, staff, or guests. Harry Parr and Sam Bompas  are jellymongers who will be giving a performance this Thursday, in conjunction with the exhibition Sensate: Bodies and Design. Bompas & Parr claim to spend so much time together that they have become psychic, so for this interview Harry answered for Sam and Sam answered for Harry. 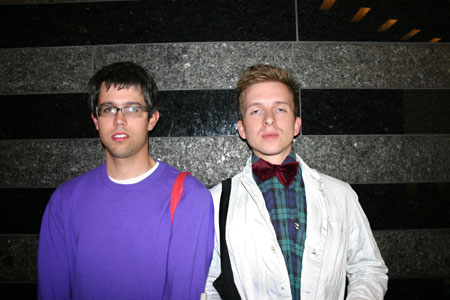 Harry: Sam Bompas, London, jellymonger, and his hobby is shopping for bowties.

Sam: How did you know? Wow, you are psychic. Harry Parr, London. He lives in Bermondsey actually, opposite a rather attractive pub. He is an architectural food-smith. His hobby is – I’m tempted to mention something about the razzmatazz trousers because Harry has the most extraordinary collection of brightly colored trousers I’ve ever seen in my entire life. I guess it’s the job though, really. In Harry’s studio he has a rather improbable collection of industrial machinery, ranging from vast industrial humidifying equipment to Vac Formers.

Harry: He collects bow ties which I think I mentioned. He collects books as well. He’s got a very large collection of books about food, about the history of food and also lots of very intellectual literature, which I don’t understand but he does read and tells tales from it but it’s beyond me.

Sam: Again, the natty trousers. Like Congo Natty. I like to think of Harry as a collector of experience and life experience.

Harry: That’s really funny. That is what I would say that I collect.

Sam: Well that’s because we are psychic, Harry. That’s the only reason we’re able to determine these things. So it’s not so much about the object itself but a collector of life.

Harry: He’s a big fan of the Pussycat Dolls and they are artists of sorts. So he’d have them all for dinner.

Sam: You could finish it by saying “have them.”

Harry: Have them? I think I did finish it.

Sam: No, but then you said ‘have dinner” which slightly qualifies.

Harry: I thought that was still quite ambiguous. I don’t know how you’d have them for dinner. It’s safe to say you could forgo doing much cooking.

Sam: It could be quite an interesting application though. Could you imagine a body…Okay let’s stop talking about this. Harry would have Antony Gormley. We haven’t met Antony Gormley but I think we’d very much like to. I think we’ve got a lot to talk about.

Harry: I think he’d want something like the Trevi Fountain. He would get a pneumatic drill, or rather he’d get me to steal it for him. And we could import it into his house. And probably replace the water with something else.

Sam: Actually that’s true. As a Cancerian I’m quite water orientated. I’m big on liquids. With Harry it’s always big. It’s always ambitious. He would steal a very large building, maybe St. Paul’s Cathedral and then you could put your house on the roof of St. Paul’s.

Harry: I was thinking the other way around.

Harry: It would be really good for Bermondsey as well. That’s where I live. It doesn’t have many sights. It used to have a biscuit factory where they invented Twiglets which are quite an amazing cocktail snack from the 50s. And they invented all manner of biscuits like chocolate bourbons, there are incredible garibaldi biscuits as well. They invented, actually, snack culture, I think. Which I know you guys are quite keen on. They invented that. Snack time was invented there. But I think St. Paul’s on the roof of my house would bring back that level of fame to Bermondsey.

Sam: It would be quite difficult to disguise it. I think that would be a challenge as well to rise to.

Harry: His “drug scales” which measure in very small increments. So you can get up to 100 grams in naught point naught naught one. He finds it very useful for cooking when you’re adding. And in doing experiments he wants to make sure he has exactly the right quantity of liquids. That’s his favorite tool.

Sam: Buzz saw. It’s very useful. It’s very handy when you’re cooking to get that amount of cutting power. Especially when you’re making walls for cooking with. A lot of our work is as much about environment as about what people eat. So typically what we’ll end up doing is going into a space and transforming the space and then presenting a banquet within the area. It means you have to pay attention to the space itself, which a buzz saw is useful for.