Coming Up: Greater Horrors, an interview with Anthony Discenza 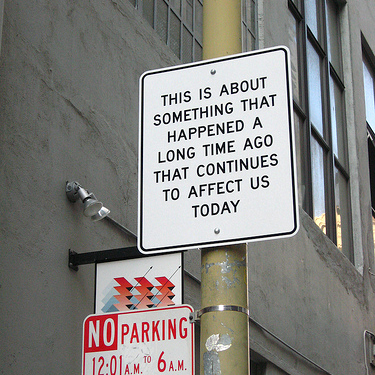 For the past year artist Anthony Discenza has been installing, without permission, a series of street signs attached to sidewalk poles on Minna Street, near SFMOMA. Last month I emailed him a few questions about the ongoing project:

Let’s start with some stats on the The Street Signs Project. How many signs have you installed? How many have been confiscated vs. stolen? When did you start the project?

I started the project a little over a year ago, back in May or June of 2008.  To date, I think I’ve put up 14 signs; of those, 6 have been removed—I know the city took down at least 2 of them and 2 were stolen. Of course, I’m not counting the 3 signs I put up in San Jose as part of the Rejection show at the SJICA. Those signs had a slightly different agenda, as they were made specifically around the idea of rejection. San Jose made us take those down as well, but they didn’t confiscate them.

With The Street Signs Project you’ve stepped away from the densely layered image-rich video work you’ve become known for into text. It seems your long relationship with Science Fiction narratives, which have ostensibly inspired much of the video work, plays a role here too. Signs like “Transported into a Realm of Remote and Delicate metaphor, Will we see Angels?” suggest an abstract landscape of fiction (if not of drug use). Other signs like “Coming Up: Greater Horrors” are more situational, as if placed there to speak in an uncanny way directly to the reader. Can you talk about how science fiction has influenced the language of these signs?

The Street Signs Project does seem like quite a departure from the video work, but they actually emerge from a tradition of working with text that goes way back in my practice, and in fact predates much of my video work.  For years I’ve played with fragmentary pieces of text that I either found or wrote myself. I think of this activity as kind of shadow practice, one that has been deeply tied up with my having worked in office environments my whole adult life.  Over the years I’ve accumulated entire drawers full of text-derived pieces, most of them printed or Xeroxed on 8 ½ x 11 paper, or scribbled on lined yellow legal pads. In many ways I think I’m influenced by things I encounter in language and literature more than purely visual things, and I’ve always been a big fan of text-based art, from Ed Ruscha up through David Shrigley.  I love the way that language can be an object, and the way that a small, enigmatic fragment can somehow invoke something much larger in the mind. 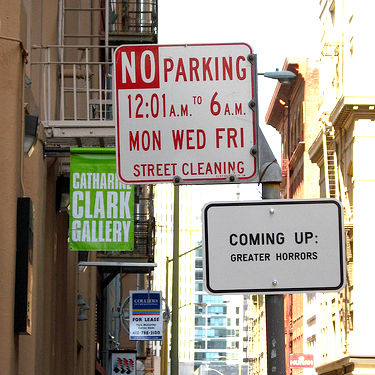 I can trace The Street Signs Project back to some work I was doing in 2000—a series of very short, but very dense and compressed fragments of text that incorporated found language, quotes, stream-of-consciousness, etc. These pieces were by turns sarcastic, portentous, and vaguely apocalyptic in their feel. The mixture of tones at work in the street Signs echoes those older pieces in some way; there is a certain fictive streak running through them. I wouldn’t say that they’re  influenced by any one type of source—they emerge out of a process of ingestion and regurgitation of the many voices of mass culture that are continually bombarding us. In some way I might describe the signs as a kind of deliberately flawed ventriloquism or parroting of those voices.  Alternatively, I might describe them as a conflation of elevated modes of speech with more prosaic or banal forms–the Gothic novel mixed with the People magazine headline.

During our last conversation you mentioned that there’s a tone of sarcasm that runs through the sign project. Do you imagine specific characters speaking these phrases? Is there a subtext or some sentiment you want to deliver to the people walking down the street in San Francisco? 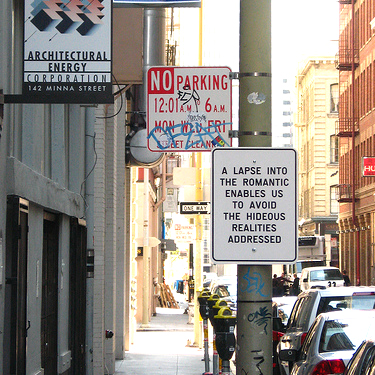 One of the things I did want to do with these signs, and which I think drives a lot of the text-based work I’ve done, is to allow my sense of humor to have a greater outlet.  Frankly, I think one would be hard-pressed to find much humor in most of my solo video work. If there is any there, it’s buried pretty deep.  At the same time a lot of my interest in text-based projects revolves around the idea of a voice, of who or what might be speaking. I think we live in a situation now where we’re constantly being addressed by a highly mediated form of speech that cloaks itself in a variety of different voices.  A good example of this is the way that so many advertisements now use a first-person voice, as if a real person was speaking, when really it’s just some massive corporation trying to put its arm around us.  I see this as a very insidious act of mimicry, sort of like the way the demon in The Exorcist mimics the voice of someone very close to you as a way of breaking your spirit.

Traffic signs are interesting from this perspective because they form this massive textual field that exists everywhere. They’re ubiquitous to the point of invisibility; we obey them (or not) but we don’t really attend to them. Traffic signage can also be thought of as having a very particular and unified voice—I’d characterize it as very matter-of-fact, authoritative, a little bit mindless. Traffic signs presume our obedience, and so kind of normalize it. Of course, they’re threatening as well, since they also imply the potential of punishment for non-compliance. So I thought it would be interesting, or maybe just funny, to introduce a tiny point of rupture into this field. I wanted to see what happened when different sorts of speech suddenly emerged from it.  But the voices that the signs speak in aren’t meant to suggest characters—rather, I think of them as part of the normalizing voice of mediated culture in its manifold disguises.  This is why I always use a first-person plural form of address in the signs.

Your previous work tended toward the maximalist, addressing the over-saturation of an individual living in the information age, yet the signs are clean and controlled. While part of this is, as you’ve said, a result of borrowing the visual logic of street signs, your occasional use of lists takes this a bit further. Can you talk about the typological approach in some of the signs? 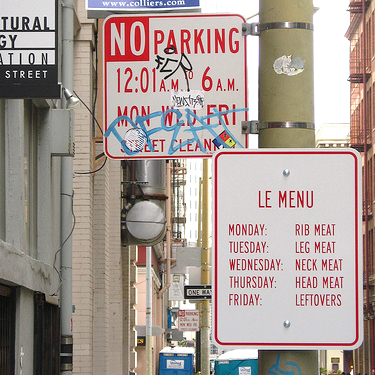 Again, it goes back to the idea of voice, and thinking here of the way typography and layout combine to create a kind of voice in your head.  To me, traffic signage has this kind of loud 1960’s robot kind of voice—in particular, I think of the robot on Lost in Space.  So Street Signs just use the same design decisions (or lack of them.) Again, it’s an act of mimicry; I like imagining the text of my signs as being spoken in that same sort of voice.  It’s like a baseball announcer reading a Victoria’s Secret ad—it collapses the authority of the announcer on the one hand and renders the contrived attempt at seduction utterly ridiculous on the other.

The list is definitely a form that keeps re-appearing in my text work.  I guess it’s a form I’m just naturally drawn too; I’m a bit of a compulsive list-maker. It certainly has something to do with working in an office environment; where lists are a permanent feature of the landscape.  Of course, my fascination with lists mirrors the larger culture, as it seems to me we’re all pretty obsessed with them.  If you think about it, there’s a kernel of absurdity built into the notion of a list.

You’ve recently decided to produce a limited, but large, edition of four panels from The Street Signs Project, screen-printed on paper. In most cases these will be brought into the home of the buyer (and off the streets). How do you imagine these signs operate differently in a private space? 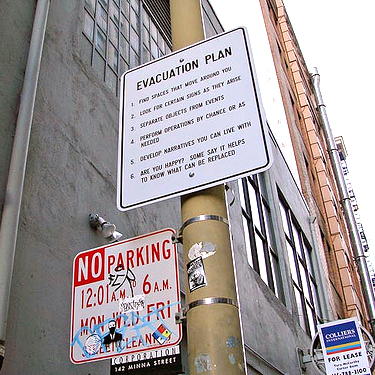 Well, the project has a finite lifetime built into it; I won’t do it forever and the signs themselves are fairly transient.  The project is also very limited in its spatial scope, so a lot of people will never see any of the signs firsthand. The posters are one way to expand the range of the project a little. It’d be nice to install signs all over the place but I just don’t have the resources or time. I also admit that, given the impermanent nature of the project, I’m still attached to having some sort of physical object to be able to give to people, even if in that sense the posters are little more than a kind of souvenir.  I can’t pretend that the effect will be comparable, but hopefully the signs that I’ve made into posters are still funny and provocative. And that the project works through the juxtaposition of these peculiar acts of speech with the visual vernacular of street signage and its pre-existing set of associations.