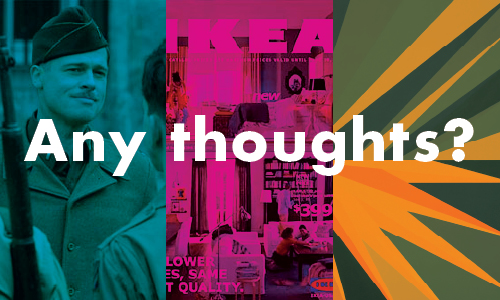 I’ve seen a few things over the past few weeks that don’t warrant their own post, but certainly have heated argument potential. What follows is an attempt to make this post more of a forum for discussion. Any thoughts? Just keep reading…

Glourious Basterdization: With trepidation, I went to see Quentin Tarantino’s new film, “Inglourious Basterds,” this past weekend. It has been alternately praised and condemned (most stingingly by David Denby in The New Yorker) for its Jewish revenge-fantasy take on World War II. I’ve become weary of the treacly Jews-as-victims storyline and would support a moratorium on Holocaust-related films for the next decade if asked. So to see some hard-nosed Jews kicking some Nazi ass sounded refreshing, even if I could sympathize with those who might feel that Tarantino, by spinning out his own pulp fiction from the most tragic of 20th century events, had overstepped his already wide bounds in this latest work. Tarantino, though, actually liberates the film from such concerns by making it a tall tale, and his invented story is from where the unadulterated pleasures spring. This, paradoxically, makes it Tarantino’s most serious (and maybe accomplished) film. His dialogue is witty, but never laugh-out-loud funny. Tarantino is not so uncouth to deny that even within his genre-mashup approach (the opening credits’ use of no less than three different vernacular styles is the most obvious tip-off), the subject matter still requires a primarily sober tone, with only Brad Pitt’s broad turn as a Tennessee-born army lieutenant providing the occasional comic relief. Even the film’s outrageously staged final act accomplishes its high wire balance between dark comedy and tragic fugue, and I came out of the theater utterly thrilled and baffled over how Tarantino’s gumbo of influences could feel so fresh. Any thoughts?

Vilifying Verdana: The new 2010 IKEA catalog came out this past week, and while most people probably tossed it straight into the recycling bin (along with that crumbling IKEA chair just purchased last year), typography aficionados went apoplectic over the shift from the use of the typeface Futura to the everyman-but-really-designed-for-the-web Verdana. The blogosphere chatter got so loud that no less than The New York Times web site featured an article about the controversy at the top of their home page on Sunday. IKEA spokespersons claim it’s to help IKEA be more versatile and efficient in a increasingly global and web-based market that is reeling from a worldwide recession. I couldn’t help but think this is another byproduct of a more ascetic design age driven by web-based media and its obsession with data-based barometrics over aesthetics. (See this post written by a former Google creative director on his blog.) Couldn’t they have at least picked a system font that was a bit more elegant like, say, Georgia? I’m all for efficiency, but visual concerns (not to mention consistency) still play a role, too, don’t they? Any thoughts?

The Process is the Point: The recent Wallworks exhibit at the Yerba Buena Center for the Arts (YBCA) invited 8 artists to create site-specific works on the gallery walls. The works themselves are a wonderful celebration of the visual and the tactile, but YBCA took the exhibition one step further by opening it up to visitors before the artists finished installing their pieces. This allowed visitors a rare behind-the-scenes look into the artist process and, in turn, made YBCA more transparent and accessible as an institution. (Full disclosure: my design firm does work with YBCA and designed the exhibit catalog for Wallworks.) I greatly enjoyed this behind the curtains view offered by YBCA, and yet I’m sure there must be a question for some of how much arts institutions should be following certain societal trends—in this case, the effect of social-based media—or provide refuge from them as a way to create an art experience that is more “pure.” Any thoughts?