Whose Car Is This? 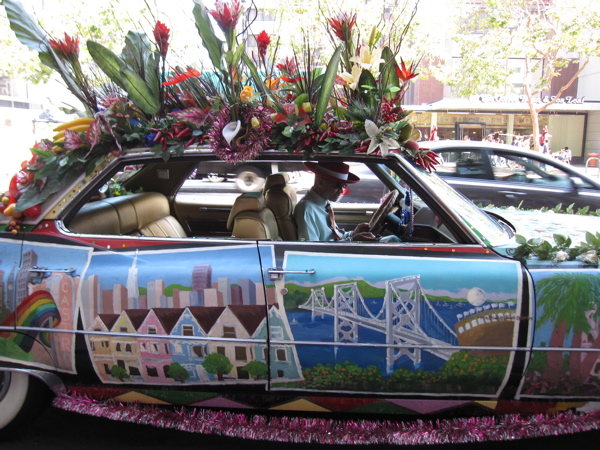 I was walking down Market Street on Saturday just taking in the day with my sometime colleague Bradford Nordeen. He and I have co-authored a groundbreaking article on “The Cinema of Whitney Houston” that is supposed to appear in the October issue of L.A. based art and culture magazine Animal Shelter. So there we were fresh from shopping when we saw this classic car parked on Market Street. (Wait, I forgot to say that if you are interested in bargains, get yourself down to “Agnes B.” on the first block of Grant, they are going out of business and everything, everything is 70 per cent off!) It’s a shame they are going out of business but now their prices are sort of in the Ross Dress for Less category. Well back to the car. 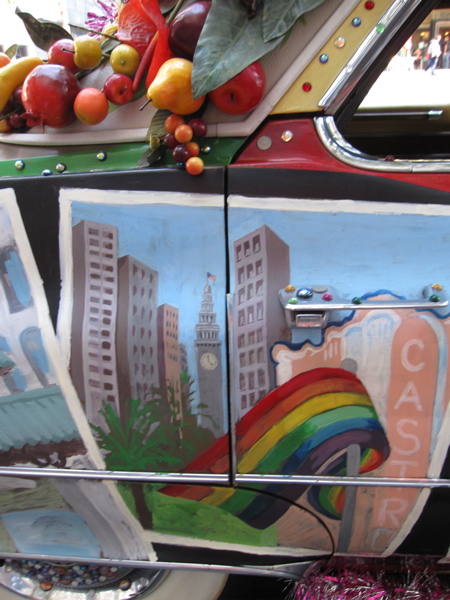 This painting has everything in it — maybe it’s Market Street itself– from the Ferry Building through the tweaky village of the Castro!

Tourists from dozens of nations saw a photo op and brought out state of the art Leicas, Panasonics, Nikons to do it justice.

Meanwhile the driver played it cool, making a long and involved cell phone call in the shade behind the wheel and making as if he didn’t notice he was, like Britney Spears in “Gimme More,” the center of attention.  I admired his cool in more ways than one–he was rather like Jean Paul Belmondo in A Bout de Souffle.

If you remember, San Francisco was having a rare summer’s day full of heat and sun. The fake fruit attached to the roof of the car, along with a dramatic growth of plastic flowers and Christmas tinsel, gave it the Brazilian air of one of Carmen Miranda’s headdresses in her 1940s Fox Technicolor musicals like The Gang’s All Here. It was almost more than the eye could take in, and my mind flashed on how labor intensive this work must be. 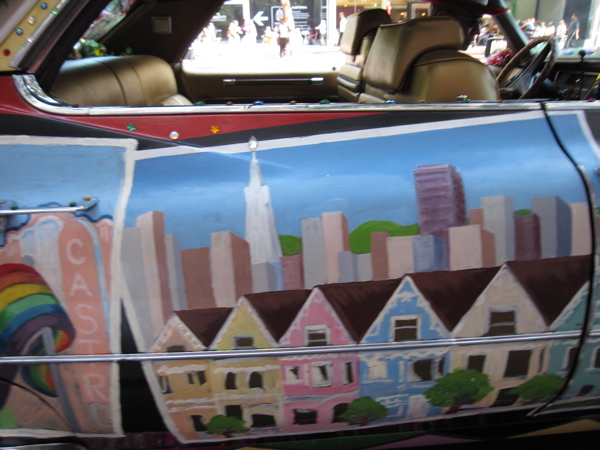 The famous postcard houses on Alamo Square that symbolize “San Francisco” to many.

Photographers were urging their friends to pose in front of this imposing piece of Bay Area visual culture, so I got Bradford to stand there and say cheese, I think spoiling a man from Greece who was similarly urging his girlfriend to say, oh I don’t know, feta I suppose.

There’s Bradford. You can sort of see the car’s hood which depicts a vertiginous hill swoop of the cable car halfway to the stars.

Finally I climbed around the hood and stood in traffic attempting an impromptu al fresco interview of the driver. My status as reporter for “Open Space” has given me more cojones than formerly, though I haven’t actually been shy in thirty years.
“Do you live in San Francisco?” I asked.  Driver nodded briefly and clicked off his cell phone.  “Yes.” 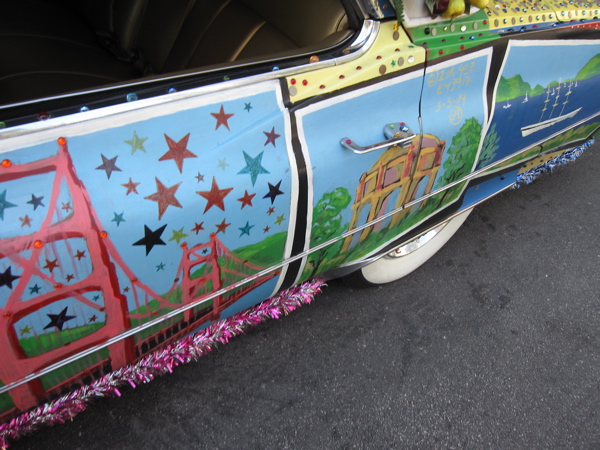 Driver’s side. Golden Gate Bridge, then what’s that thing in the middl?

“Did you customize this car yourself? Are these your paintings?”
“The postcards, “ as he called them, “were all done by a girlfriend. I did the stuff on top—“ —the living sculpture of what would you call it?  —like a fruit meadow— “and also the rhinestones.” I don’t have good pictures of the rhinestones, but rhinestones big as cobblestones decorated the hubcaps and bumpers of the car.  Well, here you can see a hint of them: 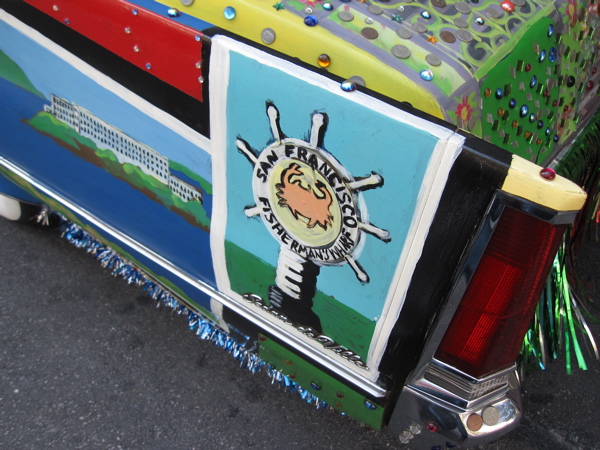 Rhinestones like hailstones fall on the crab on the fisherman’s wheel down at Fisherman’s Wharf, and Alcatraz to the left.

In the back windshield was a glamorous de-cal of my oldtime favorite Janis Joplin. But I don’t have good picture of that either, nor of the car’s showpiece, the hood with its dramatic reconstruction of a cable car spilling down California Street–but it was super cool and you know me, I’m not easily blown away. 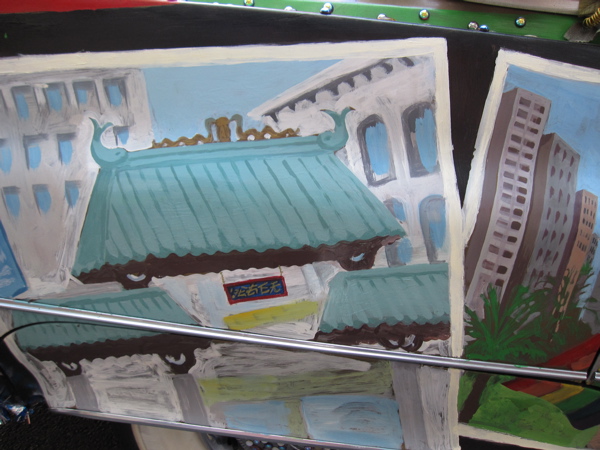 I was so flustered however I forgot to ask the driver what his name was, so I appeal to my readers —whose car is this?

And can you make out the make and model? 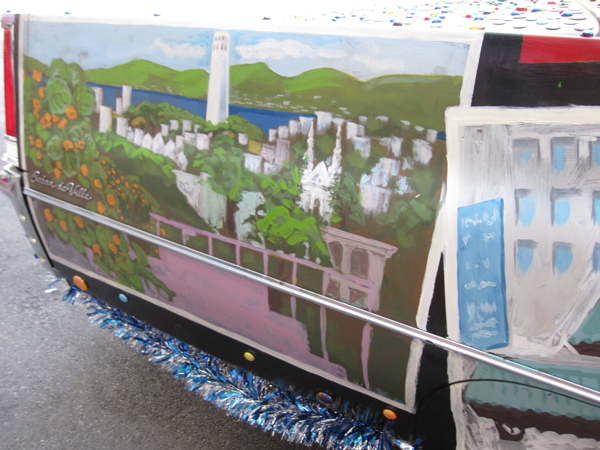