The State That I Am In 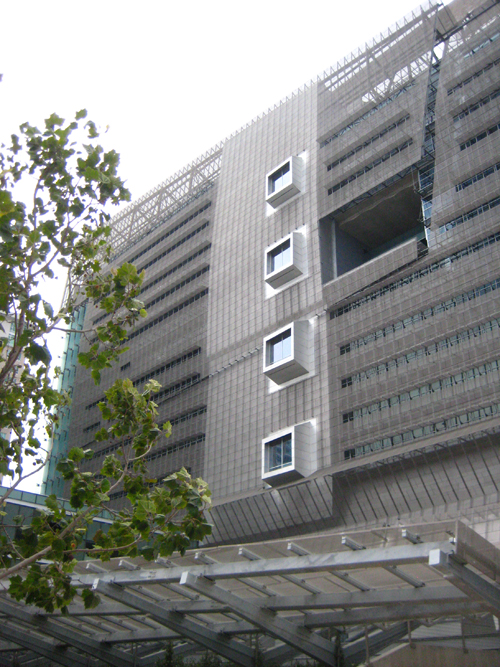 South facade of the Morphosis-designed Federal Buiding in San Francisco

When I was an architecture student in Pittsburgh 20 years ago, one of the first vanity monographs I bought was about Morphosis, the Los Angeles firm started by Thom Mayne and Michael Rotondi (who moved on  to found Roto Architects in 1991). Their fractured forms, rendered in meticulously inked drawings and gritty models, were eye-opening to us budding designers studying in a city not known for its architectural adventurousness.

This memory came back to me as I toured—with fellow columnist, Adrienne Skye Roberts (see her related post) and Open Space editor-in-chief, Suzanne Stein—the Morphosis-designed United States Federal Building that looms large over the South of Market neighborhood like a giant, modern-day aerie of government regality. As an architecture school graduate and brief practitioner, I admire the building for its sheer creative chutzpah, especially considering the client is the federal government. The Morphosis tics, that two decades earlier rarely expanded beyond southern California and the scale of a modest private home or restaurant interior, are now super-sized with this work. So while my architecture aficionado side can’t help but be thrilled, the American citizen in me is left a little uneasy.

The Federal Building anchors the northwest corner of Mission and 7th Streets, its immediate surroundings a neighborhood still in transition. Any effort to enable active public space here would face obstacles, but the barren plaza that greets one approaching from Mission Street seems intentionally off-putting, down to the security cameras that sprout from a high pole that at first glance resemble a dual-pronged lamp. These features, coupled with the structure’s willful disregard for the street level experience, have the collective effect of a giant “Beware of Government” sign. 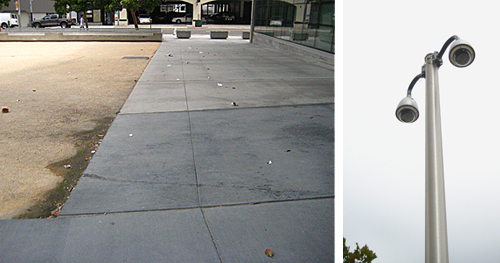 The plaza and the sneaky security cameras

Once inside, though, the experience is warmer. For such a large building, there’s a surprising comfort and intimacy to the main lobby with its mélange of colliding forms and materials interrupted by bursts of natural light. The almost four-floor main vault is offset by scattered fauna and the intimate scale of the main egress lines. One isn’t really connected to the world outside anymore, but the space feels secure and safe. 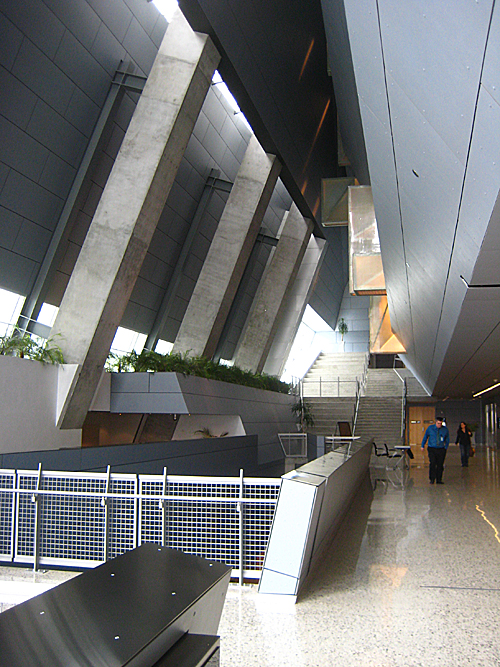 The upper floors fight Brazil-like monotony by adding finely crafted wood panels and spacious three-story lobbies (“to promote exercise” claim the self-guided tour material), four of which feature Ed Ruscha banner works that span the height of the vertical walls opposite the elevators. The centerpiece of the tour is the Skygarden, a three-story outdoor observation deck that frames commanding views of the city. It also doubles as a James Turrell installation that is most appreciated at night from the street below. (And maybe solely appreciated from this vantage point since only the employees are allowed in the building after 3pm.) 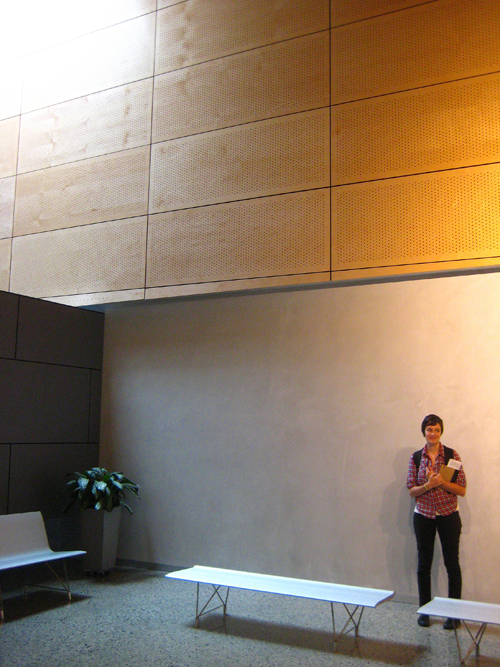 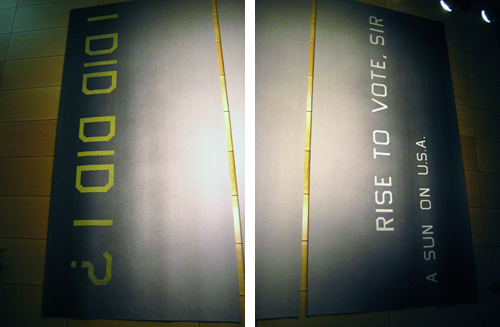 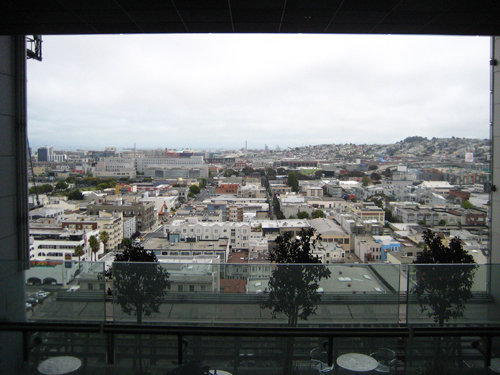 View of San Francisco from the Skygarden

While it’s never easy locating stylistic influences in a Morphosis design, I was reminded of the Imperial Empire’s megastructures in the original Star Wars trilogy. Darth Vader would have been very pleased with this building’s imposing profile and enjoyed the vantage point of the outdoor observation deck, so perfect for pumping up a horde of stormtroopers en route to a skirmish with the Rebel Alliance. (So THAT’S what the empty plaza below is for!)

I use this pop culture reference point not to belittle, but to emphasize the building’s sinister overtones that reinforce the imperial tendencies of the Bush years and amplify the (often irrational) fears of our populace. Idealistic aspirations, now back in the vogue with the Obama presidency, are not present here, architecturally. Even the details that probably were created to add a much needed humanity often do the opposite. The scrolling LED banner greeting visitors in the elevators above the sliding doors is slighty Orwellian. Whether it’s the context or intentional, the palindromic Ruscha pieces evoke more an ominous sense of doom than the quiet and playful ambiguity usually present in his other works. 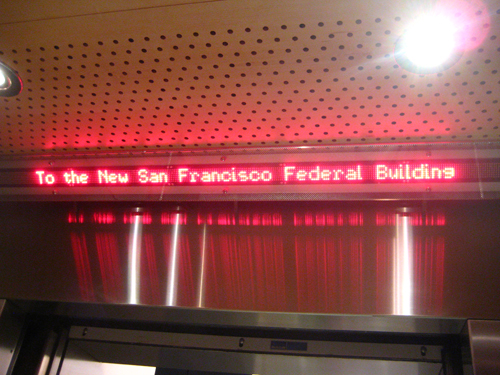 So it’s no surprise that the standard presidential photo of a smiling Barack Obama—our Luke Skywalker (for now)—that greets one in the entrance lobby feels out of place in a house really fit for an autocratic emperor. Granted this design was realized in the Bush era, but is this really what the client and architect intended? Is the building some kind of critical comment on government? Or did creative and legislative hubris blind the its enablers to these associations? (And which explanation is the more unnerving?)

The wild card in all of this is the actual people who work there. On the day we visited the guards running the security screening checkpoint were chatty and accommodating. One of the employees we stopped to ask about the use of the Skygarden and the public lobbies couldn’t have been more open and accommodating to our questions. There was even a easel-mounted poster in the main lobby urging employees to voice their opinion on how their work environment meets their needs. The question is whether all this goodwill is a result, or in spite of, the architecture. And maybe it doesn’t matter. If architecture is, first and foremost, about the human needs it services, then this project, at least for the employees we encountered, is a rousing success. (Especially if one also considers its LEED-certified “America’s Greenest Federal Building” status, at least according to the tour materials.) 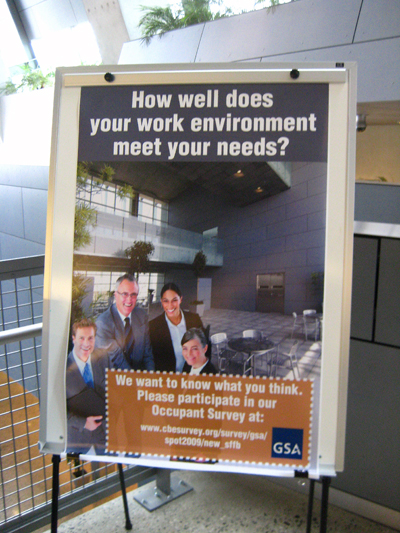 The building’s failure is, instead, an external one outside its climate-controlled hallways and the formalist vacuums we often evaluate such projects. From the street, Mayne’s building speaks to a bunker mentality, not democratic idealism. What we really need now is architecture that tilts—like our new president—toward inspiring hope and change, not highlighting what divides us. Mr. Mayne, your building, formally sublime as it may be, is not the sovereign or mental state we are in.