Ian Padgham, our marketing and communications assistant, with a fantastic story about the elevator girl in Robert Frank’s famous photo…and do come down if you’ve yet to see Looking In: Robert Frank’s “The Americans”— it closes Sunday. 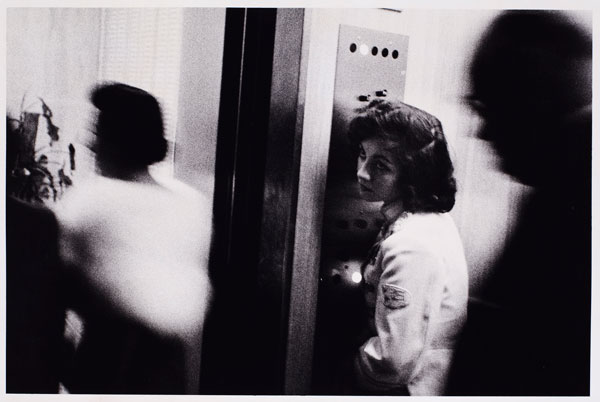 “Robert Frank, Swiss, unobtrusive, nice, with that little camera that he raises and snaps with one hand he sucked a sad poem right out of America onto film, taking rank among the tragic poets of the world.

To Robert Frank I now give this message: You got eyes.

And I say: That little ole lonely elevator girl looking up sighing in an elevator full of blurred demons, what’s her name & address?”

Such are the closing words of Jack Kerouac’s introduction to Robert Frank’s book of photographs, The Americans. For me, these three sentences sum up in beautiful Beat wisdom the bittersweet essence of Frank’s work. America is a sad poem, but nestled within that sadness is a sweetness that calls us siren-songlike into something profound.

Aside from the incredible pay that accompanies a museum job there is an entire array of employee perks that make working at a nonprofit worth your while. We get to meet artists behind the scenes, see art that is not on display, enter all museums free, and roller skate through the galleries during off hours (okay, I was kidding about seeing art not on display). We also—and this is my favorite—have staff “walkthroughs” of the exhibitions: a sneak peak with a curator where you get to hear all the great stories behind the exhibition.

During The Americans walkthrough Assistant Curator Lisa Sutcliffe regaled us with a couple great stories about Frank’s work. Interestingly, one of the most amusing involved a piece of yellowed paper covered with typewriter scrawl that turned out to be Kerouac’s original draft for the introduction of The Americans. It differs slightly from the citation above (the last part of the draft contains a booze-fueled stream of misspelled brilliance that I highly suggest you track down) but that last line about the elevator girl is still there. Sutcliffe showed us the photo Kerouac references [above] and we all had a good laugh about how Kerouac had essentially used one of the most important photographic oeuvres of the 20th century for what amounted to a Craigslist “missed connection.” I was particularly intrigued because part of my job at SFMOMA is doing our Twitter feed, and Kerouac’s pickup line, weighing in at just over 130 characters, was exactly the sort of thing I would love to “Tweet.” I spent the rest of the walkthrough planning how I was going to word my next post…

My tweet was not to be, however, for as soon as I returned to my desk the phone rang. This is usually what it’s like coming back from walkthroughs—you’re riding this wonderful high from seeing all the art that tricked you years ago into majoring in Art History instead of Business only to return to your cubicle and be slapped by the reality of work. The phone rang a second and third time and I sat there resisting whatever marketing salesperson waited on the other end. I was about to let it go to voicemail when, for whatever reason (it’s my job?), I picked up. What I heard next was worthy of a Twilight Zone episode:

“Hello! My name is Sharon and I just saw my picture in the Chronicle —I was the girl in the Robert Frank elevator picture!”

Long story short: Several days before the staff walkthrough Kenneth Baker of the San Francisco Chronicle came and reviewed the Robert Frank show. He then proceeded to write his review and included in his article the very same picture to which Kerouac had dedicated his amorous last line. His article was edited, formatted, and finally printed and sent off to the delivery vans. One of those vans delivered one of the copies of that Chronicle to the house of a certain Sharon C. of San Francisco, who opened it and found, sadly staring into space, her very own 15-year-old face. After what was probably a moment of surreal disbelief also worthy of a Twilight-Zone episode, she picked up the phone and called the SFMOMA Communications office. After ringing several times her call was finally answered by a young man who had just gone through a Robert Frank exhibition walkthrough and who was less than happy about answering the phone.

That, my friends, is not only the most awesome museum story of my life, but it’s almost entirely true (I might have made up Kenneth Baker’s writing process). I met up with Sharon later that day and we went to the galleries with photography curators Corey Keller and Lisa Sutcliffe. We talked about Sharon’s life, and we even went into one of the SFMOMA elevators and updated the pic: 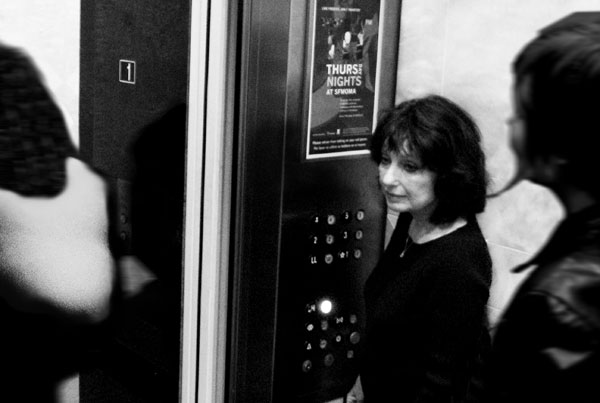 It turns out Sharon has been a longtime member of SFMOMA but despite her love of photography and the arts she never knew about the introduction to the book. So now, 54 years after Frank snapped a shot that would leave a great American poet yearning, I can finally bring it all full circle and tweet: