In May, Joseph Del Pesco and I posted a critical reading of the Art and Education Papers archive, which had then just been announced. In it, we contrasted that project with a site whose constitution we liked better, called AAAARG. AAAARG is many things, but is probably known best these days as a kind of digital library and radical public amenity, devoted to the history of art, architecture, theory, political writing, and pretty much whatever else its community’s members decide to scan and upload. Based in Los Angeles, artist Sean Dockray is the principal of AAAARG. What follows is a dialogue on the history and ideas behind the site, followed by links to several readings relevant to its origin.

JD: Can you say something about the history of AAAARG? When did it begin, and with what impulses or ideas in mind?

SD: Generally speaking, it has always been about sharing knowledge in the form of text. Currently the web address for AAAARG is a.aaaarg.org (2009); before that it was just aaaarg.org (2007) and before that it was aaarg.e-rat.org (2005, with Aaron Forrest). Before that, there were a couple more that didn’t even have any A’s in the title (beginning around 2001).

JD: Have there been significant changes in direction or shifts in concept?

SD: Originally it was kind of a proto-blog, with people able to write essays and have discussions through a message board and possible even work on projects together. I think the library part of it first started informally in 2004 because discussions and projects often referred to texts. Now most people see AAAARG purely as a library, which I’m not opposed to.

JD: So it began as something more discursive?

SD: I think it’s still discursive. If you’ve ever tried to get your friends to read or listen to something you know that that act of sharing is a kind of communication and it almost compels reciprocity – so I think there is still a discussion happening, but it’s not really in the words. Most people describe AAAARG as a “resource” and I think that’s appropriate. I find that I’ve spent a lot of time working on things (alongside AAAARG, The Public School, Distributed Gallery and Berlin; and some more bounded ones: Games for 5 Joysticks, The Fundraising Show, and Chung King Common) that might be described as infrastructures or resources. In a way, I think it is in the same spirit as that restaurant Food (started by Gordon Matta-Clark and Carol Goodden in 1971), in that it provides something that we as progressive cultural producers need, while at the same time supporting the social generation of ideas. 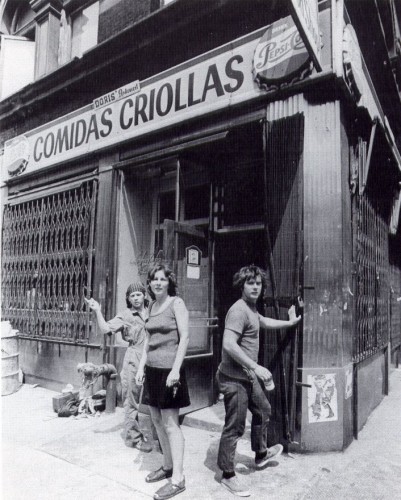 JD: Your description of AAAARG poses the project in architectural terms. “Rather than thinking of it like a new building,” you write, “imagine scaffolding that attaches onto existing buildings and creates new architectures between them.”

SD: I had the image of an urbanism where the buildings are more-or-less left alone — which is to say they aren’t demolished or rebuilt in another way or something — but there is this temporary, reconfigurable, lightweight presence filling gaps and making connections and surrounding those buildings. I think, in my little picture, this alternative urbanism eventually swallows up those buildings like a flood and the negative space becomes positive space.

JD: It’s different, for example, than a utopian, anti-institutional model; that is, it doesn’t seem to want to overturn or replace anything now existing. It’s not revolutionary in principle. Nor is it rigidly “alternative” or “parallel” — maybe “symbiotic” would capture it. Can you say more about this?

SD: I don’t think AAAARG is an oppositional project, although I can completely understand that some might think of it in that way. “Symbiotic” still has a bit of the same connotation, only the two sides have a temporary peace treaty which holds them at equilibrium! AAAARG is much more promiscuous than oppositional. It doesn’t defend territory or try to conquer it. It just rearranges it.

JD: It seems also to refer metaphorically to AAAARG’s relationship to existing institutions (institutions are so often conflated with architecture). What is your sense of the affiliations of those who contribute texts and use the site?

SD: A lot of people use the site. I have no idea who 90% of them are, but of the ones I do know, a lot are artists. There are independent curators, people working at cultural institutions, writers, publishers, activists, grad students, a good number of professors, practicing architects, and various combinations of the above. Many use their institutional access to the benefit of others. Some people have been collecting materials as part of their own research for decades and share that. There are non-institutional reading groups using and contributing texts. It is really quite varied. 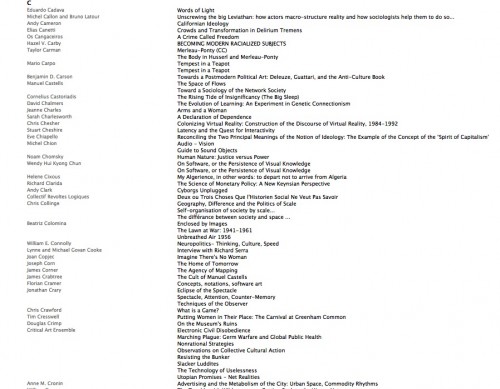 JD: So AAAARG is extra-institutional.

SD: To be honest, at the beginning I never thought very much about who was or wasn’t in institutions. The project wasn’t about criticizing institutions, copyright, authority, and so on. It was simply about sharing knowledge. This wasn’t as general as it sounds; I mean literally the sharing of knowledge between various individuals and groups that I was in correspondence with at the time but who weren’t necessarily in correspondence with each other. It seemed like rather than building up something together that could be re-used or added to, these various projects were repeating each other, but without really acknowledging it. Or they had something to offer each other but didn’t know it. Towards the beginning AAAARG might have been a way of bringing these people and projects together in a certain way, like a playing field.

JD: This aspect of AAAARG is really appealing. Essays put up for whatever specific reason — a class, a conversation, whatever — don’t exhaust themselves in that act of sharing. They stay on the site. And so these efforts of locating and copying and scanning (and as you note, institutional access) gradually mount up into something that extends beyond what a single person could produce.

SD: I’m actually fascinated by the ways that scans end up circulating before they arrive on AAAARG. Often it’s not so direct — I’ve talked to a few people who saw something that they personally copied several years ago suddenly end up being shared by someone that they don’t know. And I’m sure the texts continue to circulate unpredictably afterward too. In some ways I guess AAAARG is just an accumulated image of some of that activity.

JD: Do projects like AAAARG and Public School build directly from ideas explored in your formal education? Or are they a reaction against it?

SD: I’ve studied mathematics, mechanical engineering, architecture, writing, and have a graduate degree from the design | media arts program at UCLA. I’ve worked a bunch of different kinds of jobs, as well, from construction management to grave digging to computer programming to managing a hotel. I think the projects probably come more out of that mess than any particular discourse.

The possibility forum – institutional change and modest proposals: Charles Esche
For the concept of “engaged autonomy.”
Whatever Happened to Total Design? : Mark Wigley
I continue to read this mainly for the discussion of “incompleteness” within design.
Friendship as a Way of Life: Michel Foucault
“They have to invent, from A to Z, a relationship that is still formless.”
Autonomy, Agonism, and Activist Art: An Interview with Grant Kester, by Mick Wilson
Theory of the Quasi-Object: Michel Serres
Describes the collective not as a group but as a process, a game.
Agoraphobia: Rosalyn Deutsche
Reading her book Evictions 10 years ago shaped my thinking about public space in many ways.
Call: The Invisible Committee and Reflections around Call: Denis
Call was posted after our Coming Insurrection class, and the response came after that from an AAAARG subscriber who posts lots of great stuff. “Sharing” becomes a point of confusion and contention.
Tags: AAAARG, Architecture, Berlin, Columnists, design, Distributed Gallery, Food, Gordon Matta-Clark, library, reciprocity, scans, Sean Dockray, The Public School, urbanism