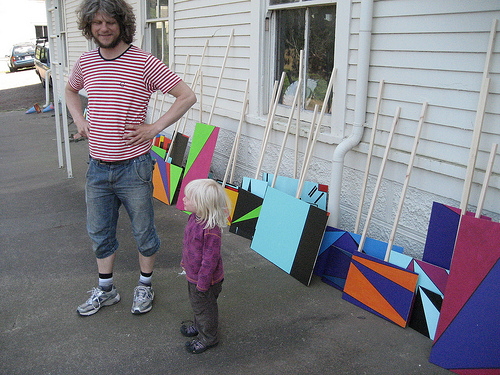 This photo courtesy of SF-based artist Gareth Spor who photographed Swedish conceptualist Jacob Dahlgren with his adorable daughter Nin on a sunny morning this summer at the Headlands Center for the Arts, protest signs leaning against the 1870s clapboard Headlands cottages.

Jacob Dahlgren missed the 60s entirely (he was born in 1970) but some of it came with him as he was born, trailing wisps of glory, to judge by his efforts at Steven Wolf Gallery during his recent presentation there.

I met with the artist several weeks ago and asked him about the body of work up on view. First let me describe it to you, it looked like about forty of fifty small paintings nailed to sticks to form placards, the kind you see whenever the union goes on strike, only they seem made of stiff paper at best. Market Street was frozen for 30 minutes yesterday while hundred of members of Local 2—the waiters union—stormed the sidewalks and traffic lanes agitating with Jacob Dahlgren-esque posters. Half the crowd shouted, “We—are!” while the other half took up the refrain, “Local—Two!” I thought of Dahlgren’s colorful signs, stacked salon style against the far wall of Wolf’s welcoming and capacious gallery, many with their sticks (handles?) in the air, or tipped lightly against the white walls. Protestors on their heads, perhaps in a restorative yoga pose…. 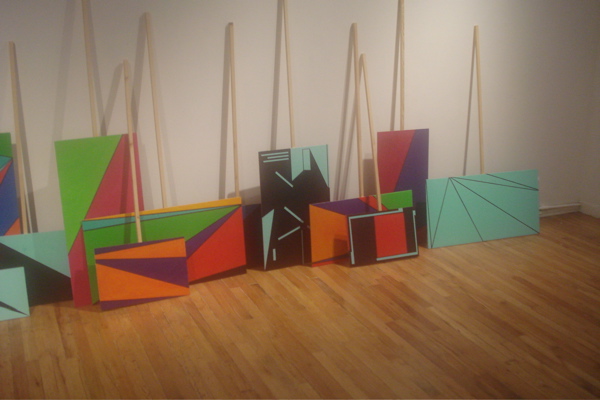 Mama, buy me one…

The images themselves, so pointedly a-verbal, are lovely and bright. What is it about abstraction the makes the soul breathe easier? (No, not you, Clifford Styll.)   Dalhgren told me about a prominent Swedish abstractionist of another generation from whom he has “borrowed” many of the elements of these paintings.  Particularly that blue. If you went to Sweden the merest schoolchild would see that blue and name the man who had made it his signature. (But now I can’t remember that name.) I asked Dahlgren if he had ever met Swedish Painter X. He looked at me with mild reproof. Evidently as any child knows, the painter in question died long before 1970. It would be like asking me if I’d known Mondrian.  “But,” he said, “as I grew older and came into a little money I bought one or two of his pictures.” Wow, that must have been a thrill, I said.

His website shows these signs being carted down a wet, gray street somewhere in Sweden on the shortest day of the year—buildings older the the earth looming behind the cheering populace. Maybe in Sweden bright colors are particularly defiant and festive, more so than in Marin, where they are regularly used in meditation ceremonies and stable renewal. 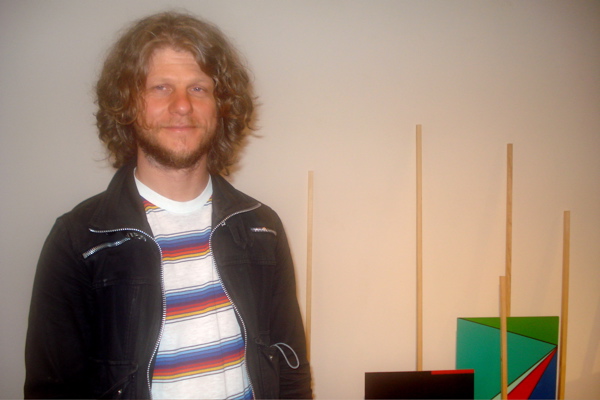 Rendez-vous with a Swede

A television sat on the floor playing Dahlgren’s video of a “demonstration” he had provoked during a recent residency at Headlands Center for the Arts. Same signs, but here in Marin. As I watched the local marchers poking up and down the Headlands hills and paths it seemed so different in spirit, closer to a pilgrimage, than to the on-site action of the Swedish footage. I scanned the crowd—art students in both cases, but here they seemed high, while in Stockholm only drunk.

What’s next on your agenda? I asked Jacob Dahlgren.This is where my status as SFMOMA blogger served me in good stead—first time for everything!—because, just as the artist’s forehead creased visibly. perhaps thinking, hey, this guy’s nosey and he hasn’t shown any signs of buying anything, when i told him I would write about him for the blog of SF MOMA, he brightened up and showed me some sketches for a new project.  First he found me some of Iain Baxter’s photos on the internet—Baxter, the Canadian photoconceptualist—in which he had brought with him a circular mirror that reflected in its ambit some of the famous San Francisco scenery of that Zodiac period.  The Transamerica pyramid, the Japanese tea house in Golden Gate Park.  You can see some at Crown Point Press’s website, here.  Then Jacob said, that he was redoing them!  Wow, that’s clever, I said to him.  Check it out! 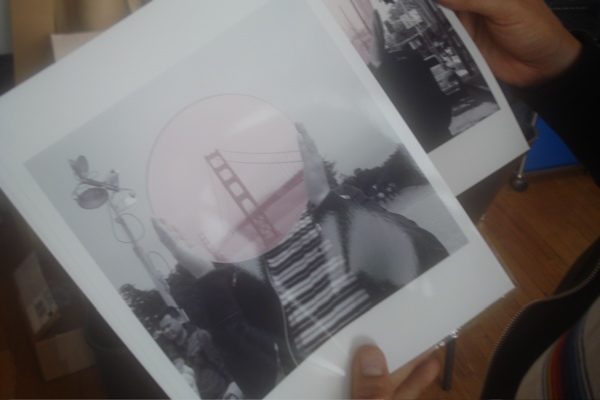 I should have mentioned these are only preliminary sketches of what Dahlgren is thinkinging of working out with his homage to Baxter’s San Francisco. Do not take them for the actual thing! This is just in the spirit of transparency, the artist in his workshop, etc.